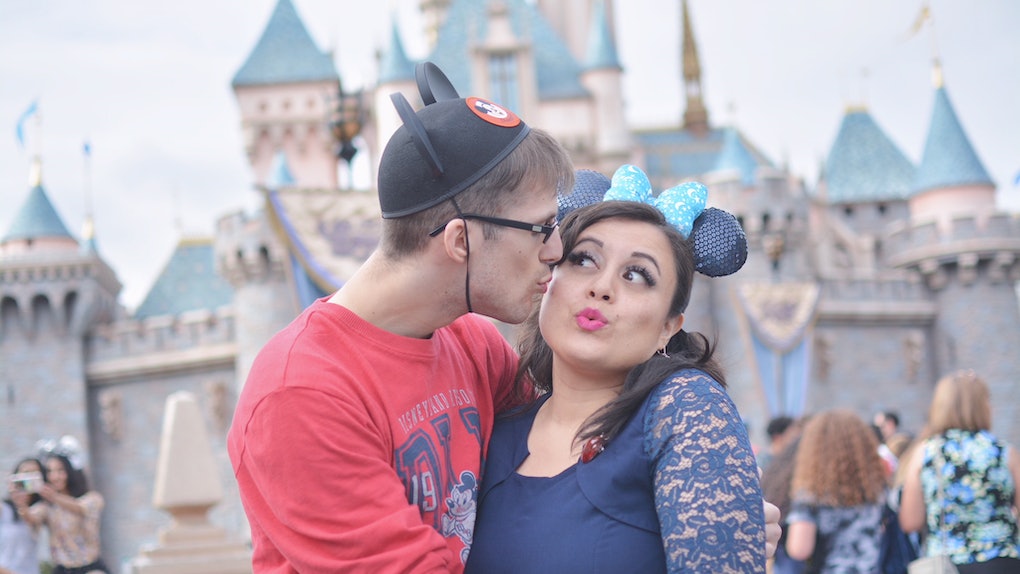 Michelle Osorio & Andy Martin Met On LiveMe & Got Engaged Despite 5,000 Miles Between Them

For those of you who haven't heard of LiveMe, it's a live broadcasting community where people can go showcase their talents online for anyone who wants to come visit their pages. It is in no, way, shape or form intended to be a dating app and when Michelle Osorio and Andy Martin met on LiveMe they had no intention of meeting their soulmates. But, alas, they did.

A mutual friend recommended Martin, who lives in England, check out Osorio's "room" in California on LiveMe where she was talking about music and singing. "Later in the night, she came live, and I was watching her sing, and I was just like, 'Wow,'" Martin tells Elite Daily. "She was lying on her bed just belting out these songs and she had like the biggest brown eyes. I was just like, 'Wow' straight away."

Osorio remembers that day, too. "I remember Andy coming into my broadcast," she says. "It was a lazy day for me because I was lying down while I was singing. But I remember I just clicked on his profile and, I mean, neither of us were live-streaming to date. Neither of us were interested in that. We were just there to share our singing and to make friends and stuff."

That being said, despite living halfway across the globe from each other, she instantly felt something special when she clicked on Martin's profile. "I remember clicking on his profile and saying, 'Oooh, you're cute,'" she recalls. "I'm not flirtatious in real life. That's the funny thing. But it's easy to on live-stream because I'm thinking, 'I'm never gonna meet these people.' So it's easier for me to say that not thinking I was ever going to actually meet this person."

"Basically, I followed him on the app so that I could see when he went live. Then I went into his live stream and I got to see him sing and I thought he was really cute," she continues. "I don't know if I actually said it in text but I did get to see him speaking and talking to everyone and singing and just get to know him a little so, yeah, that just confirmed he was nice and cute and funny and friendly."

From there, the two started to develop a flirtatious friendship. "We really just made friends after that," Osorio tells me. "I mean, there was flirtation but I think neither of us really were speaking with the intention of getting married one day or something."

Their friendship became so close that they were speaking to each other on a daily basis. "We would watch each other's live streams so we would spend lots of time doing that and then we would also talk to each other outside of that, so we were spending hours really speaking with each other," Osorio remembers.

The pair met for the first time in person when Osorio came to visit England last August. "She was doing kind of like a LiveMe trip," Martin explains. "So she messaged me and was like, 'Mind if I crash at yours for a few days?' I'd already had a bit of a soft spot for Michelle at that point so I was like, 'Yeah, sure. You didn't really need to ask.'" Despite the flirtatious nature of their friendship, the two decided not to put too much pressure on the visit. "We talked about it and we said, 'We're just gonna be friends and see what happens,' because we didn't want to put any pressure on it considering it's somebody that you met on LiveMe," Osorio explains.

She started off her trip in Wales, where she met up with a bunch of fellow musicians she'd met on LiveMe. From there, she headed over to Birmingham, where Martin lives.

"He was pretty much the same in real life," she says. "The only thing that was different when I met him was I thought he was kind of mean because he has kind of this wicked humor so that was different. I guess when you get that in real life it feels different than [it does] when it's through a glass in a phone. So first, I thought he was mean — just because of his British jokey humor — but, over time, I realized that's how everybody is there. So, after that, I told him to tone it down a little bit and then we were good. Other than that, he was pretty much the same."

She spent one night at his place and, from there, they took a train to Blackpool, where Osorio met up with other friends she'd made through both LiveMe and virtual reality. In that experience, Osorio felt as though she and Martin were really able to get to bond and get to know each other. "But even then, it didn't become serious," she admits. "We did go on a few dates and go out to dinner and stuff and we went dancing and it was awesome but I guess in my mind it still wasn't a full possibility. So I think I was still kind of guarded with him and with my feelings because I wasn't sure. I really just didn't think it would go anywhere because he lived so far away. It was still just kind of a flirtation."

In fact, they were so sure that their long-distance virtual courtship would never develop into anything real that they both got into relationships with other people when Osorio returned to California.

"We both tried dating people a hell of a lot closer to home — like in the same town as opposed to opposite continents. The person I was dating at the time, I just didn't feel any spark with them," Martin remembers. "Looking back, it was that I didn't feel any spark because my head was so firmly with Michelle. Even though I still didn't know where we stood, I knew Michelle was the person that I want. It was the 5th of December and we were on a call to each other and I just kind of said, 'I feel a lot for you and I'd be willing to move to America to make it work for the future.' I think it shocked Michelle so much that I think she went quiet for like a day or so and then got back to me."

When she finally did get back to him, she was all in. "The fact that that [marriage] could be a possibility and just knowing that kind of changed everything because we knew that now this could actually go somewhere," she says. "It was weird how quickly, like within a couple weeks, it opened up a floodgate for me. It really acknowledged how I really felt about him once I knew what he was willing to do that for me. It was a huge shock but it really turned everything around."

From there, the two utilized technology to make their long distance relationship last. "One day we spent eight hours, combining Skype and like live-streaming and all that, we spent eight hours with each other that day," Osorio fondly remembers. "I took him shopping with me on Skype. We've used it all — Facebook messenger, LiveMe, he's come to my YouTube live-streams. It wouldn't have been possible without technology for us to get [this] close."

In particular, Martin believes getting to know Osorio through a live streaming platform gave their relationship another level of depth. He believes these sorts of platforms make it so that "you can see not just how people interact with you, but with other people so you can see how they interact with everyone so then you don't see just one side of the person."

In total, Martin estimates the two spent a collective three weeks physically together before he decided to pop the question at Disneyland in California this past May.

"We were talking about [getting engaged] because of my looking to immigrate into America, so we were looking at what options were available and then, basically, I was carrying the ring with me the whole time I was at Disneyland because I knew I wanted to do it at Disneyland," Martin remembers.

Martin decided to propose right as he and Osorio were about to take a photo in front of Sleeping Beauty's Castle. Before the photographer snapped the image, Martin told him he had one quick question to ask. Then he dropped to one knee, turned to Osorio and said "I know you've had a lot of magical memories at this place, I just wanted to know if I could add one more."

Ugh, swoon! Needless to say, she said yes and now the two are in the process of planning their wedding.

While they haven't ironed out all of the details just yet, they're clear on a few things. First of all, they'd like the wedding to be in May. Second, it's going to be in either England or California. And, finally, they are going to try their best to live-stream the ceremony.

"I think we would probably assign somebody to be the wedding videographer basically but a separate person to just be doing the live streaming and reading the chat and like [being] interactive because people could say, 'Oh, I want to see the cake,' and the person could go show them the thing that they want to see," Osorio explains. "But I don't think I would be the one doing it because I don't want to get to that level of distraction on my wedding day."

I can't blame her.

Congrats to the happy couple! Here's to hoping we all get a chance to tune into their live-streamed wedding.