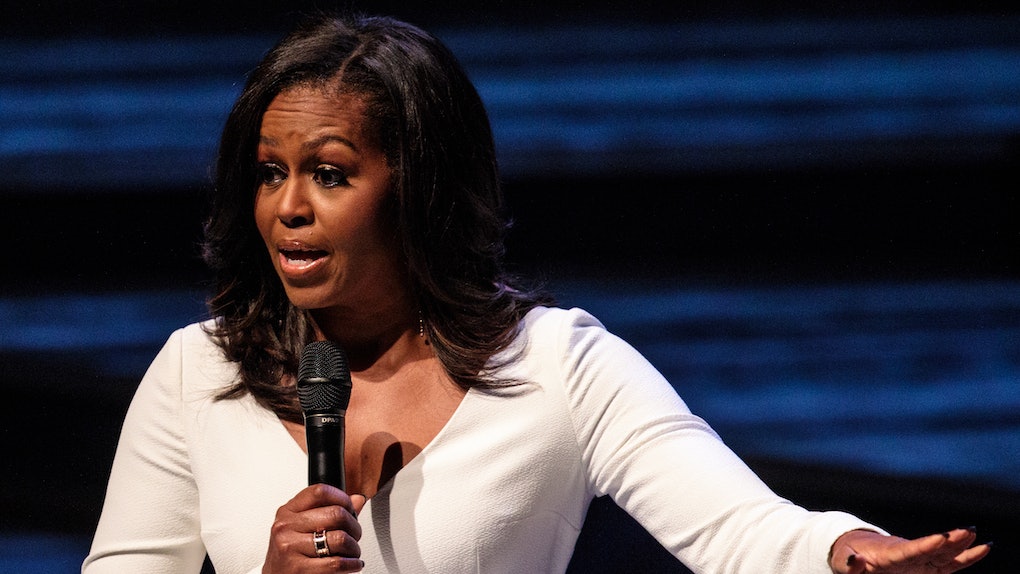 Michelle Obama’s Comments About Imposter Syndrome Are So Relatable

Michelle Obama might not be the first lady anymore but that doesn't mean she isn't still inspiring the country. Over the years the public has found ways so connect to her words — most famously, "when they go low, we go high," a mantra she gifted us with during the 2016 Democratic National Convention. Nearly two years since exiting the White House, Michelle Obama's comments about imposter syndrome show us she's still as relatable and inspiring as ever.

While on tour promoting her book, Becoming, Obama sat down with author Chimamanda Ngozi Adichie at a sold-out event at the Southbank Centre in London on Tuesday, Dec. 4. Per BBC News, Obama confessed to the crowd that she still has "a little imposter syndrome," and explained that even she shares in the communal "doubts" of "our abilities" and "our power." Obama said,

I still have a little impostor syndrome, it never goes away, that you're actually listening to me. It doesn't go away, that feeling that you shouldn't take me that seriously. What do I know? I share that with you because we all have doubts in our abilities, about our power and what that power is. If I'm giving people hope then that is a responsibility, so I have to make sure that I am accountable.

Imposter syndrome, which is also known by a few different names and is not a medical diagnosis, is generally defined as a feeling that you are a fraud in your life and workplace, and that your successes have been due to chance rather than work or talent. The term was first coined in a 1978 paper by psychologists Pauline Rose Clance and Suzanne Imes. While an estimated 70 percent of people can face some sort of imposter syndrome, according to TIME, women tend to experience it more —especially successful women. Clance and Imes' paper focused on the syndrome in "high achieving women," and they found that the women they studied over the course of five years, despite being "highly successful —" subjects included women with PhDs, scholars, and female students at the top of their class — still felt they weren't really deserving and had "fooled" those who thought they were. The 1978 study said,

Despite outstanding academic and professional accomplishments, women who experience the imposter phenomenon persists in believing that they are really not bright and have fooled anyone who thinks otherwise.

While you could argue that many things have changed since 1978 (I mean, a woman finally ran for president for a major party), imposter syndrome is still extremely common among women. According to The Independent, a 2017 study conducted by Amazing, a career development agency, found that 40 percent of millennial women feel like a fraud at work, nearly double the 22 percent of millennial men who felt that way.

Dr. Valerie Young, who's studied and written extensively on the idea that more women suffer from imposter syndrome, explained to Cosmopolitan in 2017 that when a woman makes a mistake "she blames herself seeing it as proof of her supposed ineptness at a subject or task." In her 2017 interview Young also attributed the disparity in imposter syndrome between men and women to societal factors. Young noticed that imposter syndrome among women is more common in professions where there are less women.

So if you've ever felt like you don't belong at work or you're just faking it, know you're not alone. There's a whole girl gang there with you, including our former first lady.