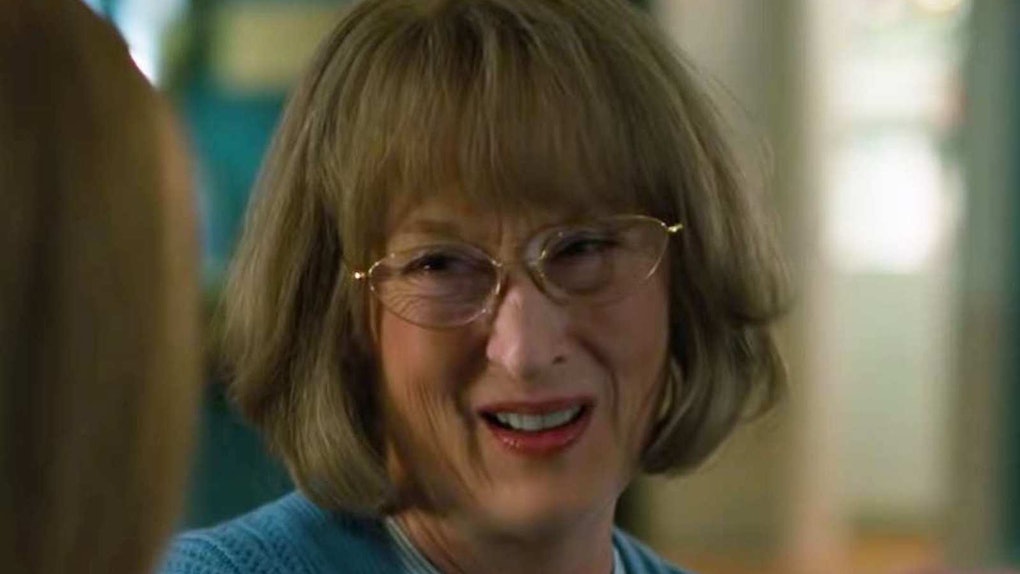 After months of anticipation, Meryl Streep finally made her Big Little Lies debut on Sunday night's Season 2 premiere. Streep arrived in Monterey as the menacing mother-in-law Mary Louise Wright, complete with a whole new look for the role: a short bob with bangs and oblong glasses. But the transformation went even further than viewers may have noticed. Meryl Streep is wearing fake teeth in Big Little Lies, and there is a very specific reason for them.

Spoiler alert: This post contains plot details from the Season 2 premiere episode of Big Little Lies. The first episode of the new season is all about the murderous lie that connects the Monterey Five, and Perry Wright's newly arrived mother Mary Louise, who threatens to uncover the truth. Meryl Streep's character is quick to make enemies in Monterey, prying into the details of her son's death by needling her daughter-in-law Celeste and straight-up insulting Madeline Mackenzie. Apparently, Streep went an extra step to feel even more connected to Perry Wright than expected.

Big Little Lies' executive producer Gregg Fienberg confirmed to Page Six that Meryl Streep got fitted for fake teeth of her own volition in order to more closely resemble Alexander Skarsgård, who played her character's son on the show.

Yes they were 100% fashioned and inspired by Alex’s teeth. She is his mother after all. It was Meryl’s brilliant idea.

And not only did Meryl Streep pop in some fake teeth for her new role, but she got them made without even telling anyone that she was going to go that extra mile. Kathryn Newton, who stars on Big Little Lies as Madeline's rebellious teenage daughter Abigail, told Cosmopolitan that Streep ordered the dental work without letting anyone else know:

I was blown away by her dedication as an actor. She made teeth for the role. She got them made. Like, she didn’t ask anybody. She just did it.

Per Page Six, Meryl Streep's new set of teeth came from Hollywood's go-to guy for prosthetic teeth: Chris Lyons of Fangs FX. Lyons has worked with a number of A-list stars — most recently he was given the daunting task of fashioning the Freddie Mercury teeth that Rami Malek wore in Bohemian Rhapsody. And he has actually worked with Meryl Streep prior to making her Big Little Lies teeth. Lyons also crafted the teeth that Streep wore to portray Margaret Thatcher in 2011's The Iron Lady.

The fake teeth really show just how seriously Meryl Streep is taking her new role on Big Little Lies, proving that she is more than prepared to go the extra mile to bring Mary Louise Wright to life. That should excite fans even more for the remaining six episodes of Big Little Lies Season 2, and now we all know to look out for Streep's shiny new teeth while watching the new episodes, as well. Who knows what else Streep has in store for us as Mary Louise. Big Little Lies Season 2 airs Sunday nights on HBO at 9 p.m. ET.