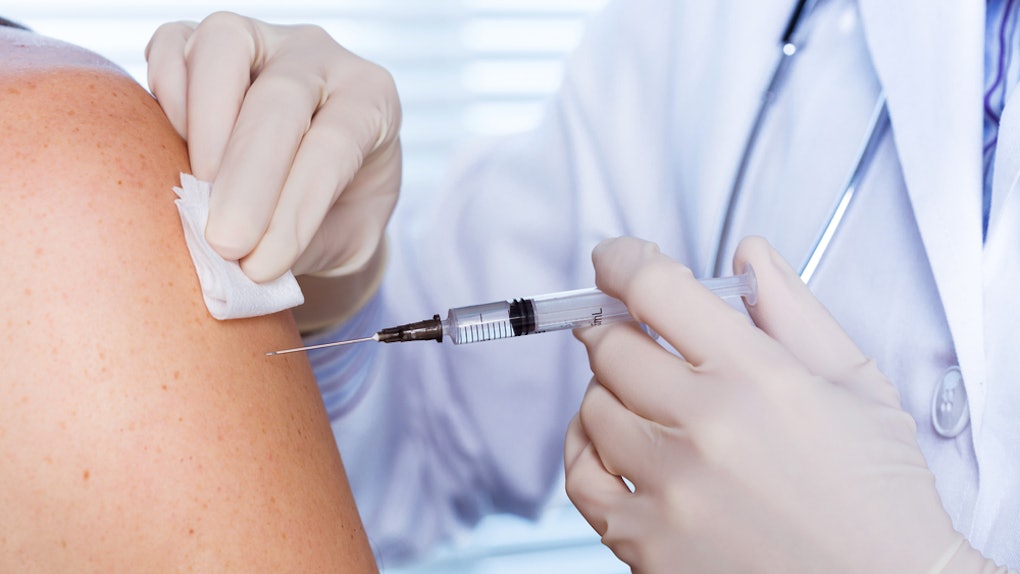 Men Are More Likely To Have Oral HPV & HPV 16 Than Women Are, New Study Says

It's a tale as old as time. You go home with a guy and things start to get hot and heavy. You hop onto the bed and you ask him to grab a condom. He says he doesn't really "like" them. You say you'd really rather he wears one. He insists it's just not the same for him and he doesn't have condoms on him, so it doesn't even make sense to use it. Well, if you don't want HPV, you better make him wrap it up. Why? Because men are more likely to have oral HPV and HPV 16 than women.

Needless to say, that's not the only reason you should be encouraging him to wear a condom. In addition to being the most effective way to prevent pregnancy, condoms are the best way to protect yourself from every STD, not just HPV. That being said, HPV is the most common sexually transmitted infection, according to Planned Parenthood. And while it's usually a harmless infection that ends up treating itself, Cosmopolitan reports some of HPV's more high-risk strains cause "70 percent of cervical cancers, about 95 percent of anal cancers, and more than half of all cases of oropharyngeal cancers in the soft palate, tongue, and tonsils."

So, what's the deal with dudes contracting HPV more than women?

A new study from the Annals of Internal Medicine found that one in nine U.S. men has an oral HPV infection. One in nine! That's more than 10 percent! To paint you a little picture of why that's so alarming, Cosmopolitan reports that number translates to 11 million men. This is compared to a mere 3.2 million women across the country who also have oral HPV. Yes, that's right. More than three times as many men have the virus compared to women.

The study also found that men are six times more likely than women to have HPV 16, the high-risk strain of HPV responsible for half of oropharyngeal cancers (aka a kind of mouth cancer).

Are some dudes at higher risk than others?

Yes. The study found that there are a few behaviors that do put men at higher risk of contracting a strain of HPV: smoking more than 20 cigarettes per day, regularly smoking weed, and having more than 16 vaginal or oral sexual partners.

What extra steps can you take to reduce your chances of getting HPV?

Unlike most other sexually transmitted infections, HPV is unique in that there is an extra measure you can take outside of using condoms to protect yourself from contracting it. What is this extra step, you ask? Well, there is actually a vaccine that protects you against the infection.

The Centers for Disease Control and Prevention (CDC) recommends men and women get the three rounds of shots around ages 11 and 12. Even getting the shots twice (aka not completing the whole cycle) is effective. So you would think having these shots and, you know, access to condoms, would make HPV rates lower than ever, but alas, they don't.

Why are men getting HPV more than women?

Unfortunately, while many women are taking the initiative to get the HPV vaccine, men aren't quite going out of their way to get it taken care of. In fact, a January study confirmed that men are getting the shots less frequently than their female counterparts.

In addition, Ashish Deshmukh, the senior author of the Annals of Internal Medicine study, wrote in an email to CNN that there are a couple more reasons men may be more susceptible to contracting HPV. For starters, he explained that the infections may last longer in men. Another possibility? "It is also possible that men acquire oral HPV more readily than women," Deshmukh wrote.

This would obviously not be any issue for women except for the fact that many of us have sexual relations with men and when we don't use proper protection, we increase our own risk of contracting these diseases.