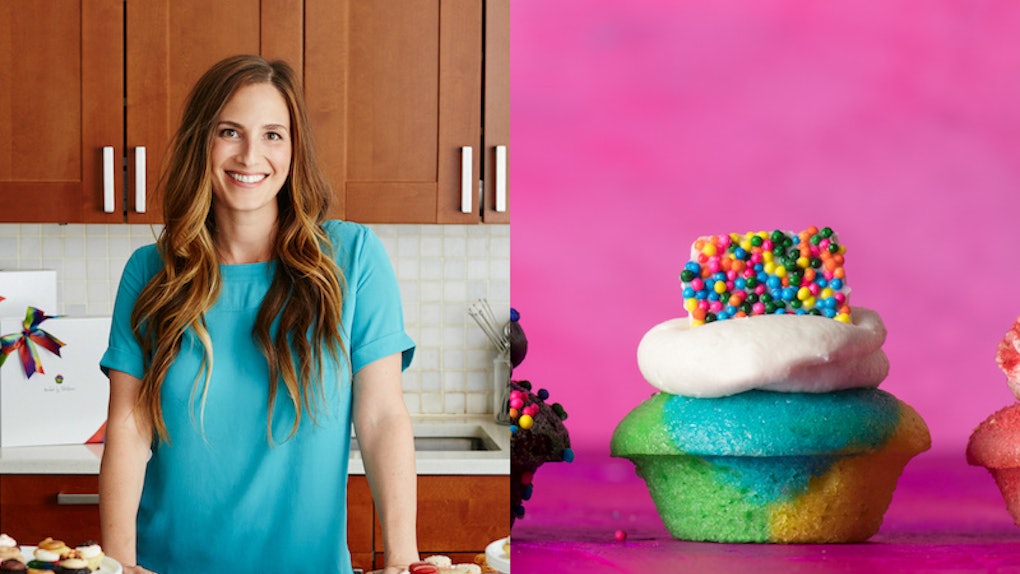 Courtesy of Baked by Melissa

If you’ve ever walked around New York City in pursuit of a bakery, you’ve probably stumbled upon Baked by Melissa. Between its tie-dye logo and rainbow, bite-sized cupcake selection, it’s pretty hard to miss. (Not to mention, there was probably a line around the corner.) The cupcake haven became an overnight sensation for city dwellers and visitors alike — and now, folks all over the country can enjoy its goodies with the press of a button. If you’re someone who’s visited Baked by Melissa in person or ordered a batch of cupcakes online, you might’ve wondered who Melissa even is. Let’s put it this way: Melissa Ben-Ishay of Baked by Melissa is a real person, and you can thank her for the mini cupcakes you know and love.

Ben-Ishay, 35, is the mastermind behind Baked by Melissa (and, yes, the company is named after her). Her bakery became an instant hit after its official SoHo opening in 2009, but the process didn't exactly happen overnight. In fact, Ben-Ishay started her cupcake journey when she was fired from her post-college job in 2008.

“At the time, I was upset about being fired. I didn’t understand why I was fired. Obviously, it was the best thing that could’ve happened to me, because I went on to start Baked by Melissa,” says the former assistant media planner, who held a position at Deutsch, a marketing agency in New York City.

Before she was a pro baker, Ben-Ishay was a family studies major at Syracuse University and landed not one — but two — jobs in the corporate world after college. At the time, that seemed like the best move for her to make. “I thought advertising sounded cool, so that was kind of the area that I looked for when I graduated,” she says. “But I really didn’t know, I just knew I needed to find something I was passionate about.”

She did exactly that. After being fired from her second position in the corporate world, she gave her big brother, Brian Bushell, a call. Ben-Ishay and her older brother had always dreamt about starting a business together, and he saw that moment as the perfect opportunity to finally do it. In fact, Bushell advised Ben-Ishay to go home and start baking.

“I went home the night I was fired [and] I baked four batches of cupcakes: tie-dye, cookie dough, peanut butter cup, and s'mores,” Ben-Ishay says. That night, she baked “instead of feeling sorry for herself,” which was a bold decision for a newly-unemployed 24-year-old in The Big Apple to make. She recalls how she felt that night, saying, "The only thing that you can control is your response to the things that happen to you.”

Instead of wallowing in her sorrows, Ben-Ishay baked the night away and woke up with tons of cupcakes (like, 200 of them, to be exact). She didn’t let them go to waste, though. At the time, Ben-Ishay’s best friend’s little sister was staying with her in the city, and she was interning at Alison Brod’s public relations agency. (For reference, Brod started the agency and she was a total celeb to Ben-Ishay.) Of course, she wanted Brod to taste her cupcakes, and she was able to make it happen. Brod ended up loving them and put the young baker in touch with her well-known caterer. “He actually called me the day after I was fired to bring me in for a tasting," she says. Talk about fate.

At that moment, Ben-Ishay and her brother felt the urgency to create a name for their brand new cupcake company, so they did. The baker says, “That’s when we came up with the name ‘Baked by Melissa’ and the beautiful logo that’s still exactly the same today.”

Before her debut Baked by Melissa tasting with Brod’s caterer, Ben-Ishay “pasted the logo to pastry boxes” and filled ‘em up with cupcakes. She says that the caterer took a bite of each one (loving them, of course), and asked her if she could make them “just a bite." That's how she ended up with her signature item — the classic, pop-in-your-mouth, tiny cupcakes.

After her very first tasting, Brod’s caterer invited her to make 250 cupcakes for an upcoming event. That was the very first Baked by Melissa order, and one that kickstarted her company. Anticipating more orders to come, she worked with her brother and their friend, Matt, to get a website together. Since the crew was just getting started, she says the photos were "shot on my IKEA coffee table" (#relatable).

From that moment on, Baked by Melissa grew and grew. At the time, she was baking “seven days a week” from her New York City apartment, sacrificing her social life and focusing on her passion. She says her orders were initially paid for via PayPal and delivered via the subway. As for her social life, Ben-Ishay admits, “It was hard because I didn’t get to see my friends.” Apparently, her pals would come to her kitchen, flip milk cartons over to sit on, and talk to her while she baked.

One thing led to another, and Ben-Ishay's dedication began to pay off. Soon, she retired from her apartment workspace and got a legitimate kitchen in New York City. “The opportunity presented itself to move into a new space,” she says. A bakery owner in SoHo had tried her cupcakes during a tasting and adored them. At the time, he had a booth at the holiday market in Union Square, and offered Ben-Ishay the kitchen space if he could buy her cupcakes and sell them at the market.

“People lined up for the cupcakes. We sold out every day,” she says, referring to the event. “And then after the holiday market ended, we knew we had an unbelievable opportunity, and that’s when we decided to open our first retail location in true Baked By Melissa fashion, with a bite-sized pickup window.” In preparation for the event, Ben-Ishay hired two people to help her bake and moved forward.

Word spread quickly about Baked by Melissa, and opening day on March 5, 2009 was a huge success. She says, “We had a line around the corner, and that line never went away. We couldn’t bake fast enough. It was truly the most magical, surreal, unbelievable, experience of my entire life.”

Ben-Ishay’s baking journey was a dream come true, but that doesn’t mean it was easy. The entrepreneur says, “There was a lot of moving pieces, and it was amazing — but it takes a lot of hard work and dedication and persistence and going out of your comfort zone and making it your top most priority in order to succeed. I didn’t do anything but work for the first two years of this business.”

To this day, Ben-Ishay — the “Melissa” — is head honcho at Baked by Melissa. She’s still the one who creates “every single flavor,” even though she has a team of workers behind her. Referring to her flavor process, she says, “I break down every flavor, every new product, cake, icing, topping, stuffing, and you know, a lot of the components.” Ben-Ishay says she comes up with the ideas and sends them to her vice president for consolidation. Then, her husband brings the flavors to production. “My husband and I basically are the product development team,” she says. Out of all of the flavors that she’s created, she likes Peanut Butter & Jelly the most.

From start to finish, the creation of Baked by Melissa has been a rollercoaster. Referring to her beginning stages, Ben-Ishay says, “I want to find something that I love so much that I can work, work, work all day and be so tired and fulfilled at the end of the day that I don’t feel like I need to go out. And I found that in Baked by Melissa.”

Along with a dream job comes a dream team, and Ben-Ishay admires the people she spends every day with. She says, “I have the opportunity to work with like-minded, hard-working passionate people who get sh*t done just like me, and give others the opportunity to love what they do every day.”

She continues, “We wouldn’t be here without my incredible co-founder and my incredible team of people. I’m so lucky to be a part of this amazing company with this awesome culture of 'you can do anything and see every challenge as an opportunity to learn, and grow, and be better' — and I love everyone.”

In fact, Ben-Ishay urges the importance of dedication when you’re trying to start your own business. She says that you should “be willing to work your ass off with extreme focus.” The baker continues, “When you're building your own business, it has to be your top-most priority — you have to be willing to do whatever it takes, every single day.”

More like this
Mother's Sparkling Mythical Creature Cookies With Unicorn Shapes Are Majestic AF
By Cianna Garrison
These Evian+ Canned Sparkling Water Flavors Include Unique Combos Of Fruit & Herbs
By Daffany Chan
Winc's Summer Water Societé Rosé Subscription Is Back For 2021, So Bring On The Wine
By Cianna Garrison
Stay up to date