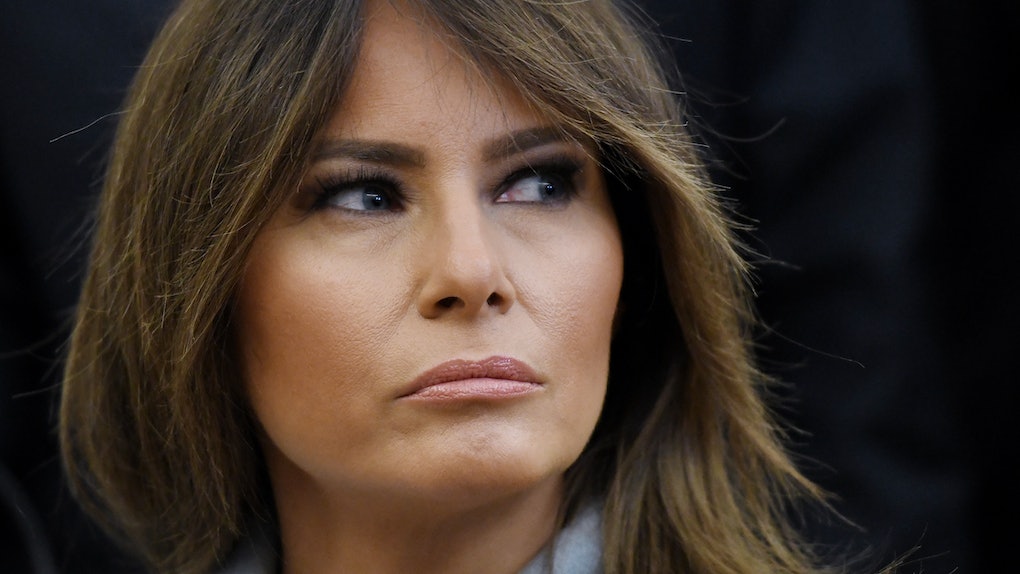 Who is Melania Trump? The first lady irrefutably has remained private since her husband took the presidential oath of office in 2017. Discounting the prestige and limelight that she now enjoys merely by living in the White House, Melania's life before marrying Donald Trump was mysterious.

"Melanija Knavs in fact never really had a true career, but her story reads as if scripted in a Hollywood success story, a true American fairytale," reads the foreword of an unauthorized biography, Melania Trump: The Inside Story, by Bojan Požar, Slovenia's leading gossip columnist, and Igor Omerza, a former politician and publisher. Požar and Omerza go on to describe a mysterious and withdrawn woman who rarely socialized, was deadset on becoming a famous model, and astonishingly would become first lady. (A spokesperson for Melania told The New Yorker that the book is “untrue and dishonest.")

She was born Melanija Knavs, (later westernized as "Melania Knauss," and ultimately, she took the last name of her husband after they wed in 2005), on April 26, 1970, in Novo Mesto, Slovenia — then part of Communist Yugoslavia. Her father, Viktor Knavs, now 73, was a car dealer, and her mother, Amalija, now 71, was a children's clothing designer, to according Biography.com. She grew up at home with her younger sister, and later learned that her father had a son from a previous relationship — her half-brother.

Here's what else you should know about Melania's mysterious life before she became Trump's third wife and later moved into the White House.

She started modeling when she was 16 and devoted her life to little else.

Trump was first discovered by Slovenian photographer Stane Jerko while sitting on a fence waiting for her friend to finish walking in a fashion show, according to NBC's Today.

"It was January 1987 when I went home just before the end of the fashion show," Jerko told Today in an email. "On the stairs of the Festival Hall, I saw a girl that immediately caught my eye. There stood a tall, slender and attractive long-haired girl with distinct eyes."

She dropped out of college.

Trump enrolled at the University of Ljubljana in her native Slovenia, to study design and architecture. Founded in 1919, it's the oldest and largest university in Slovenia, and is among the largest universities in Europe. After she signed with a modeling agency at 18, she dropped out of the university, according to Biography.com.

Her big break came when she was 22.

The Slovenian women’s magazine Jana put on its "Look of the Year" contest, in which Melania Trump was the runner-up, according to the Sunday Express. The contest helped put her on the map among European models.

She was a low-key but successful model.

Trump worked as a model in Milan and Paris before moving to New York in 1996. She worked with well-known photographers like Patrick Demarchelier and Helmut Newton, according to Biography.com, and graced the covers of magazines like Harper's Bazaar in Bulgaria and Vanity Fair in Italy. She also posed nude in GQ magazine in 2000.

Not much is known about her modeling career between 1992 and 1996, when she moved to New York, per reporter Lauren Collins for The New Yorker. She went on to have reasonable success, and worked mostly in print.

Collins also noted that Trump's modeling experience has yet to translate to her place in the political realm as the first lady — Trump's fashion choices as a fixture in American politics have not been as commercially marketable as that of other female political figures.

She learned to speak five languages.

Melania Trump reportedly speaks Slovene, English, French, Serbian, and German. She is the first first lady to be born in a Communist nation and only the second to be born abroad, according to The Week, after Louisa Adams, the English wife of sixth president John Quincy Adams.

She says she's a practicing Catholic, but was reportedly never baptized.

Trump reportedly revealed that she is a practicing Catholic after visiting Pope Francis last year, but details are hazy on whether she's received the holy sacraments associated with the religion.

She was a homebody.

In a 2005 interview with The New York Post, Paolo Zampolli, the president of ID Models recalled: "It was unusual for her to go out; she never went to clubs or bars ... She never dated anyone in New York before Donald. She only went to movies by herself and to the gym."

After becoming first lady, Melania has continued her straddle both private and public life, while opting for privacy as much as possible. She famously waited five months before moving into the White House, and has committed herself to raise awareness of cyber-bullying.

More like this
Skateboarder Brighton Zeuner Never Thought She Could End Up At The Olympics
By Rhyma Castillo
Here's Where To Find iOS 14 App Icons To Customize Your iPhone Home Screen
By Lara Walsh
The Odds Of A Plane Crash Are One In 11 Million, Yet You're Still Afraid
By John Haltiwanger and Lilli Petersen
Stay up to date