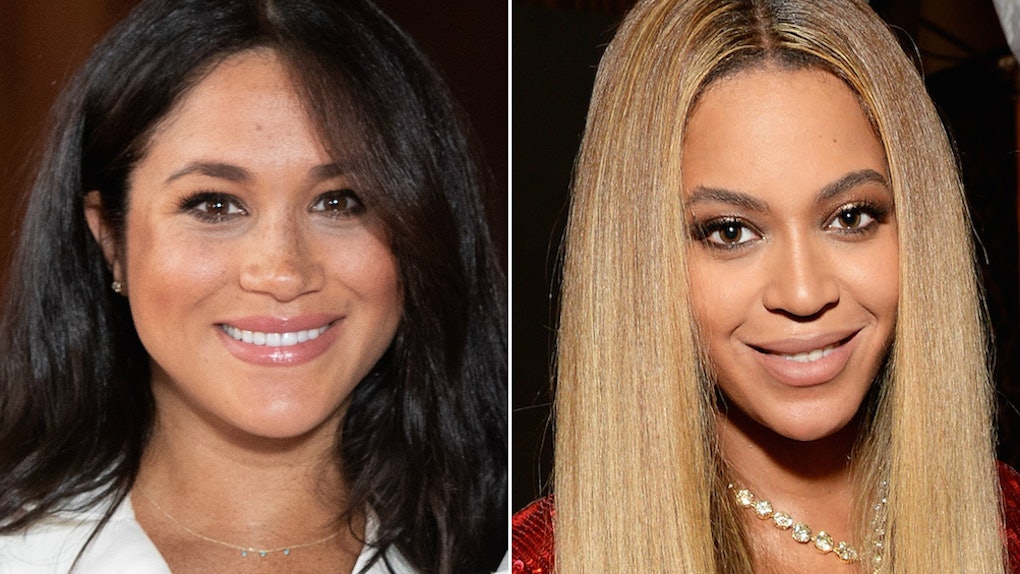 Celebrities: they're just like us! Case-in-point: Meghan Markle is a Beyoncé stan, and Beyoncé stans Meghan. And we stan them both. This revelation first came to light when Beyoncé posted on Instagram and her website in honor of the Duchess of Sussex during Black History Month, paying tribute to the "Melanated Mona" and congratulating her on her pregnancy. Meghan doesn't have any personal social media accounts, so no one knew if she actually saw Queen Bey's post. But makeup artist Daniel Martin revealed that she did, and Meghan Markle's reaction to Beyoncé's portrait of her proves that even English royalty freaks out over Queen Bey.

Martin is a makeup artist and one of Markle's longtime friends. He did an interview with Gayle King recently, where King asked Martin about his friendship with the duchess. Beyoncé's portrait of Meghan came up in conversation, naturally, because who wouldn't ask about that? And Martin revealed that he was the one to inform Meghan of the portrait.

"I sent her a pic — I think it was a screen grab of the two of them in front of the portrait. I think all I wrote was, 'Girl.' She wrote me back like the big eye emoji."

So, was that big-eye emoji reaction more like this?

Or more of a single tear for the dramatic effect?

Personally, if Beyoncé Giselle Knowles-Carter had a portrait made of me, I think screaming and then immediately passing out would be more of my reaction. Yeah, that sounds about right.

This is the aforementioned portrait, in case you haven't seen it.

Beyoncé and JAY-Z posed next to it in a video acceptance speech aired during the Brit Awards earlier this year.

On her website, Beyoncé posted the photo again and gave a long shoutout to the Duchess of Sussex.

Today we're pleased to honor Meghan Markle, Duchess of Sussex. Meghan's background as a film and tv actress has allowed her to use her platform for good. Meghan's charitable work in communities of color began years before becoming the Duchess of Sussex. As a global ambassador for World Vision, she traveled to Rwanda to see how access to clean, safe water impacts children, an issue that is near and dear to our hearts. She also visited and supported the Myna Mahila Foundation in Mumbai, an organization that helps solve the menstruation challenges many women and girls in the community face.

She became the Duchess of Sussex following her marriage to Prince Harry of the British royal family in May 2018, becoming one of the few Black women to join a royal family. Meghan brought many Black traditions to her Royal Wedding including a Chicago-based Black pastor, an amazing gospel choir, and a young Black cellist. At the wedding her culture was front and center, and she and Prince Harry have continued to push the race relations dialogue forward both near and far.

It closed off with,

In honor of Black History Month, we bow down to one of our Melanated Monas. Congrats on your pregnancy! We wish you so much joy.

I think you brought her a hell of a lot of joy when you had a portrait made of her, Bey. Invite her to Frogmore, Meghan! Rumi and Sir can be playmates with Archie.