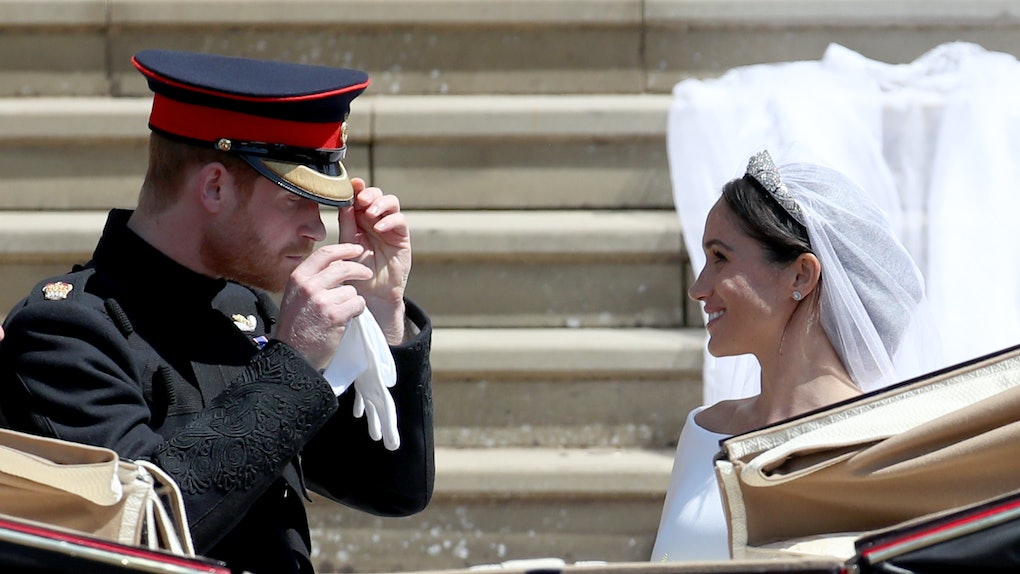 It's been over a year since Meghan Markle married Prince Harry and became a bonafide member of the British royal family. The new mom, Duchess of Sussex, and former actress' life may look vastly different now than it did three years ago, but it's safe to say she's killing it. The royal wedding is still fresh in the minds of many, and for good reason — it was spectacular. Meghan Markle’s quote about planning her wedding proves that she put a lot of thought into her big day, and it definitely paid off.

If you were one of the estimated 29 million people who tuned into the royal wedding last year, you'll remember how amazing it was. The dress, the flower girls and page boys, the train. It was so unique and gorgeous, it only makes sense Meghan would want people to know the effort that went into planning it. Fortunately, the exhibit “A Royal Wedding: The Duke and Duchess of Sussex,” now on display at the Palace of Holyroodhouse in Scotland, includes an audio guide featuring none other than the voices of the duke and duchess themselves.

The audio guide, according to People, follows the exhibit and features the couple talking about how they planned their wedding day together, including all the little details that went into it. "A great level of detail went into the planning of our wedding day," Meghan said in the audio guide. "We knew how large the scale of the event would be, so in making choices that were really personal and meaningful, it could make the whole experience feel intimate."

Of course, the wedding wasn't exactly what most people would call "intimate," what with the 16-foot-long veil and 10 children in the processional, but it was definitely romantic. Who could forget the sweet moment when Prince Harry whispered sweet nothings into his bride's ear when she got to the end of aisle? It was practically perfect in every way, and the sweet voice memo from Meghan proves she wanted nothing more than a personal day with her love. The attention to detail surely made the wedding feel intimate to the bride and groom.

The wedding was full of them, from the empty seat left in honor of the late Princess Diana to the incredible tiara Meghan wore along with her veil. But looking back at their engagement interview with BBC, it's clear the most important thing for Meghan has always been her connection to her now-husband.

When she was first set up on a blind date to meet Prince Harry, she says only cared about one thing. "I had one question," she told BBC News, "I said, ‘Well, is he nice?’ Because if he wasn’t kind, then it didn’t seem like it would make sense. So we went and met for a drink then, I think, very quickly into that we said, ‘What are we doing tomorrow? We should meet again.’" They've been inseparable ever since, and it's clear their wedding day was super special for them. Thankfully, we have photos and videos to look back on (and ugly cry over) forever.