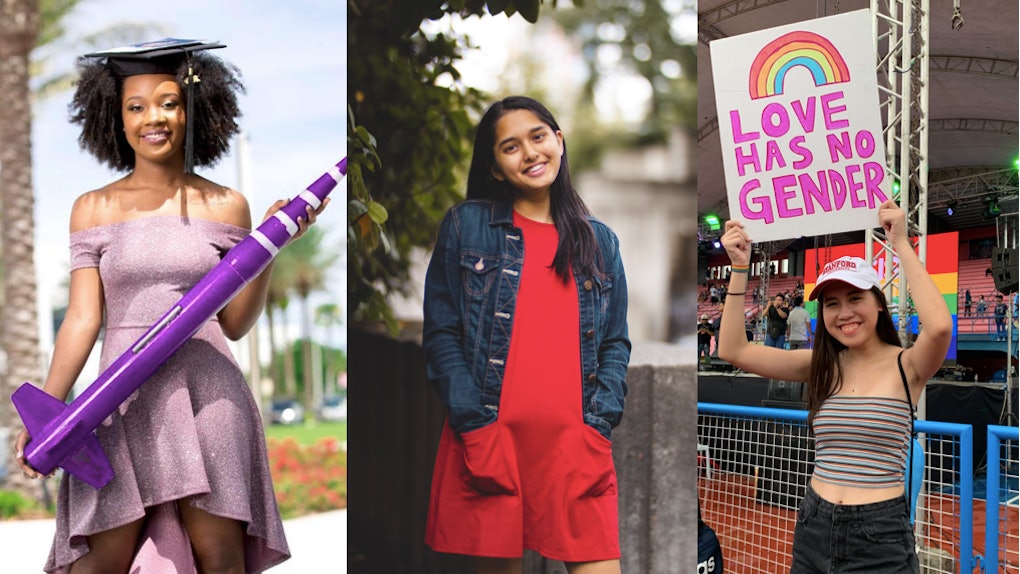 It’s 2020, and women have the same opportunities as men. Well, in some fields. Despite the increasing prominence of science, technology, engineering, and mathematics — collectively known as STEM fields — these industries have historically been male-dominated. But some young women are working to change that. These Gen Z STEM feminist leaders are leading the way for a new generation of “STEMinists,” and they’re literally changing the face of this important work.

While female representation in STEM has increased in recent years — from 2008 to 2016, the number of STEM degrees awarded to women increased by 48% — as of 2020, women’s involvement in STEM still isn’t comparable to that of men. In the 2015-2016 school year, the most recent year for which data is available, only about one-third of bachelor's degrees in STEM fields went to women, according to the National Center for Education Statistics (NCES). They’re also underrepresented on the job: According to the National Science Board, as of 2017, the most recent year on record, women were more than half of the overall college-educated workforce, but only 29% of the science and engineering workforce. Research from organizations like the American Association of University Women (AAUW) suggests these disparities can be attributed to social and environmental barriers like gender bias, discrimination, and academic and workplace attitudes that discourage women from pursuing STEM jobs.

In addition to gender discrimination, there are also racial issues in STEM: Minority women tend to be underrepresented in STEM education and the workforce. In the 2017-2018 school year, women of color earned only a tiny portion of all STEM degrees, with Black women earning 2.6% of all degrees, Hispanic women 3.6%, and Asian women 3.9%, per NCES. As of 2015, more than 60% of women employed in science and engineering fields were white.

The lack of women (and, particularly, women of color) in STEM fields isn’t just a problem for the women themselves, who are denied access to high-paying and often prestigious careers — it’s a problem for everyone. Women can provide valuable insight that would otherwise be overlooked: For example, engineered safety devices built for men’s bodies may not adequately protect female bodies, and artificial intelligence codes written only by men will likely have inherent gender biases that perpetuate sexist attitudes.

However, things are changing. Scientists, innovators, and researchers are realizing the importance of having a diverse STEM field, and young advocates are working to close the gender gap with educational initiatives and leadership. This Women’s History Month, Elite Daily spoke to three STEMinists who are using service, education, and advocacy to promote women's achievement in STEM. They may be young, but these activists are working to end generational patterns of sexism and striving toward a more diverse and inclusive STEM field.

These interviews have been edited for length and clarity.

Archika is a high school senior in Seattle, Washington, and a STEM educator who founded the EduSTEM Initiative, an international ​youth-led organization ​increasing diversity in STEM by empowering youths of underrepresented backgrounds to pursue STEM for social good.

The importance of women, especially women of color, in STEM has to do with the perspective-to-impact pipeline: Perspective turns into ideas, ideas turn into solutions, and solutions turn into impact. Diversity in STEM is crucial to bringing these different perspectives to the table. When a narrow demographic — for example, white or Asian middle- to upper-class males — controls a narrative that impacts everyone, the results will never account for diversity in perspective, which is critical to create sustainable, meaningful impact. STEM is about always building, creating, and expressing how people view the world through a problem-solution lens. Everyone should be included in this process.

EduSTEM was inspired by the lack of diversity that my co-founders and I witnessed firsthand in science and technology classrooms. When I walked into my first computer science classroom in 2016, I found myself in a room of 30 boys and one girl. I felt like an anomaly, and I ended up leaving feeling alienated, discouraged, and insecure. Witnessing such a non-inclusive class compelled me to grow my initiative. EduSTEM started as a small community service project, and now we’re an international movement. I founded EduSTEM Initiative in March 2017, and today, my organization works with 2,000+ minority youths across six countries and 19 locations, spanning 190+ workshops, events, and camps. I wanted everyone to feel like they had a voice in STEM classrooms, workplaces, and environments.

To me, STEM isn’t just science, technology, engineering, and math. STEM encompasses so much more: social awareness, transformation, empathy, and meaning. It’s this duality in STEM where I really find purpose — it’s about creating solutions for social good and uplifting marginalized communities. I've been able to grasp hold of this idea in a variety of ways: Interning for NASA, creating natural disaster relief response technologies; co-developing a sexual assault risk reduction mobile app recognized by the U.S. Congress; and working at Sensoria, a health-tech startup creating affordable AI-powered solutions for medical patients. I’m inspired by other STEMinists around me and the unlimited bandwidth for innovation, regardless of your age, socioeconomic status, race, or gender.

Naia is a graduate student at Georgia Tech University in Atlanta, Georgia, where she is pursuing a doctorate in aerospace engineering. She is the founder of Black Girls in STEM, a social initiative promoting Black girls and women in STEM fields to serve as role models for younger scientists.

STEM fields are major contributors to the progression of civilization, and it's imperative that new developments consider every facet of humanity. Women and women of color bring unique perspectives to the table.

I started Black Girls in STEM after searching for role models for myself and other girls that looked like me. My inspiration stemmed from the "Hidden Figures" — Katherine Johnson, Mary Jackson, and Dorothy Vaughan — Black women who were mathematicians at NASA in the 1950s and ‘60s. During the summer of 2018, I had my dream job working on electric propulsion at the NASA Glenn Research Center alongside some of the sharpest minds in the field. They all held Ph.D.s, while I didn’t even have a bachelor’s degree at the time. I found myself feeling very intimidated and I missed out on opportunities due to imposter syndrome. But those role models inspired me to find my voice — because, I reminded myself, I brought value to the team, or else I wouldn’t have been there. I decided to speak up about my ideas and contribute to the team.

Now, my goal is to continue to highlight Black women in STEM to provide role models for other women interested in pursuing the field themselves. I host and volunteer at workshops for STEM outreach events, and I am part of philanthropic organizations that are dedicated to promoting young women, and specifically Black women, in STEM industries. I serve as the head of chapters for the Society of Women in Space Exploration, and I conduct workshops for local organizations like 100 Girls Code in Conyers, Georgia, and iRise2STEAM in Daytona Beach, Florida. I also give keynotes for STEM conferences and outreach events where I can be a role model for young Black women who have never seen a Black woman in aerospace in person. In March of 2019, I was the keynote speaker for my university’s program promoting women in space science.

I love what I do because I’m fascinated by nature and how it reveals itself through modern-day technology. I believe technology will propel us (literally) to the edges of our solar system and beyond — I believe this technology has the potential to unite humanity. But people won’t progress as far as possible without enough diversity of perspective, background, and knowledge.

Audrey is an incoming freshman at Stanford University in Stanford, California, where she will pursue a degree in science, technology, and society. From Manila, Philippines, she is the founder of the nonprofit initiative WiTech (Women in Technology).

In order to have diverse perspectives on how to solve global issues, you need a diverse set of input. The more minds there are at work means the more innovative the solutions will be. Including women and women of color in STEM isn’t just about getting our minds working towards achieving sustainable development goals, but also inspiring young women to pursue any career that they want — regardless of what cultural expectations and gender stereotypes tell them.

Since I founded WiTech at age 15 in 2016, our team has hosted the first women in tech conference for and by students in the Philippines, taught 100+ students how to code, published interviews with 25+ women in tech from around the world on our blog, and impacted 1,100+ Filipinx students through our conferences and school roadshows. Events like our annual women in tech conference, WiTCon, are open to all and aim to normalize the belief that anyone can succeed in STEM.

Our team works towards a future where all Filipinx youth can have access to tech no matter where they are from or what gender they are born into. The United States focuses more on encouraging women to take that introductory computer science class or choose computer science as a major, but in the Philippines, the conversation is more centered towards resources, or lack thereof. [Editor's Note: A 2013 study by consulting firm McKinsey & Company showed out of 98 million Filipinxes, there were still 62 million not connected to the internet.] When considering that lack of infrastructure plus the lack of basic computer science in the public school curriculum, the challenge in the Philippines of getting more women in STEM is intrinsically linked to getting more access to STEM in the first place. If tech is being dubbed as “the future,” what good is it if it's only accessible to only the middle-upper-class Filipinxes? My work doesn't just center around achieving a 50/50 tech workplace in the Philippines, but a socioeconomically-diverse 50/50 that can use tech to uplift the lives of Filipinxes all over the country.

I love learning about the intersection of tech and humanities, and finding avenues to leverage technology development for social good. My work enables others to access tech and consider how they, too, can use it to make their communities better. I try my best to impart the importance of making STEM accessible for everyone: You shouldn’t wait until you “grow up” to make an impact on the world.

More like this
Here's How To Enter Hotels.com's Tax Write-Off Vacation Giveaway For A Chance At $2,700
By Lara Walsh
Can You Put Emojis In Your TikTok Username? There's A Catch
By Lara Walsh
Here's Where To Find iOS 14 App Icons To Customize Your iPhone Home Screen
By Lara Walsh
Stay up to date