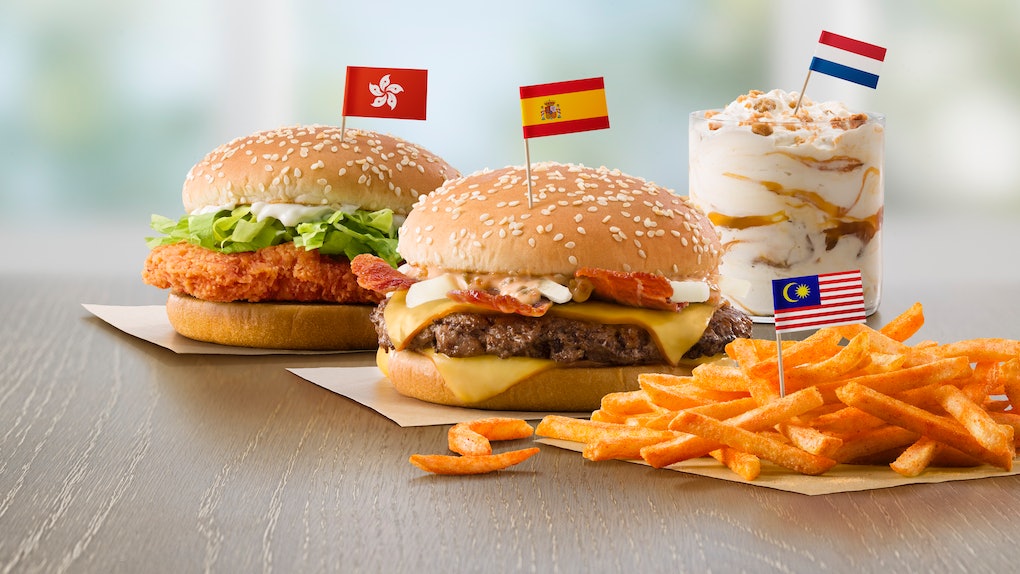 Guys, I'm pretty serious about my McFlurry order. Whenever I'm craving something sweet from McDonald's, I'll usually get a snack-size M&M's McFlurry with caramel (I'm a total sucker for anything with caramel swirls). I'd definitely say it's my favorite dessert on the menu, but that might change this summer. Why is that, you ask? Well, McDonald's' rumored "Worldwide Favorites" menu might bring global faves to the United States, including a different McFlurry with caramel swirls of its own.

Before I get into detail about the caramel-filled McFlurry that *might* make its U.S. debut this summer, let's talk about the rumored menu change. On Tuesday, April 23, Business Insider reported that four new "Worldwide Favorite" menu items would be making their stateside debut in "early June." Apparently, the publication acquired internal documents that provided details on the upcoming menu items, which reportedly include the Stroopwafel McFlurry (!!!), the Grand McExtreme Bacon Burger, Cheesy Bacon Fries, and the Tomato-Mozzarella Chicken Sandwich.

However, McDonald's didn't confirm these menu items with Business Insider. Instead, the Golden Arches emailed Business Insider the statement "Geen commentaar," which means "no comment" when translated to English. McDonald's also declined to comment to Elite Daily on the rumored menu.

But if rumors about the upcoming "Worldwide Favorites" menu are true, U.S. customers are in for a real treat. Since I'm obviously a huge McFlurry fan, I'll talk about the rumored Stroopwafel McFlurry first. According to Business Insider, the Stroopwafel McFlurry — which hails from the Netherlands — is made with stroopwafels (aka caramel waffle cookie pieces) and caramel sauce. As you know, I love caramel sauce, so I'll definitely be giving this dessert a try if it makes its way to the United States.

Believe it or not, the Stroopwafel McFlurry has already been enjoyed on U.S. soil — but only those in South Florida were able to give it a try. According to McDonald's, the Stroopwafel McFlurry came to 50 Florida restaurants in 2018 for a limited time as part of a "Flavors from Abroad" promotion that was being tested. If rumors of the upcoming "Worldwide Favorites" menu are true, I'm going to assume that the test went well.

With that being said, keep your fingers crossed that the Stroopwafel McFlurry will make its way to the rest of the United States this summer.

The other rumored "Worldwide Favorite" menu items don't sound too sweet, but they still sound delicious. The rumored Grand McExtreme Bacon Burger — which comes from Spain — will reportedly be topped in bacon, McBacon Sauce, slivered onions, and gouda cheese. The Canada-inspired Tomato-Mozzarella Chicken Sandwich, on the other hand, is expected to feature "tomato-and-herb sauce," per Business Insider. Finally, the Australian Cheesy Bacon Fries are predicted to be similar to the ones that are currently on sale for a limited time (found here).

Again, none of these menu items have been confirmed by McDonald's. However, Business Insider reports that they should become available in June. Cross your fingers that the rumors are true and get ready for an international taste at the drive-thru.

More like this
What Is Taco Bell's Times Square Digital Cantina? It's A Unique Experience
By Lara Walsh
Smirnoff's Summer Of 2,021 Dreams Giveaway Includes Free Flights & Bucket List Experiences
By Lara Walsh
This Video Tour Of Disney World Reveals Cool Design Secrets Of The Magic Kingdom
By Lara Walsh
Stay up to date