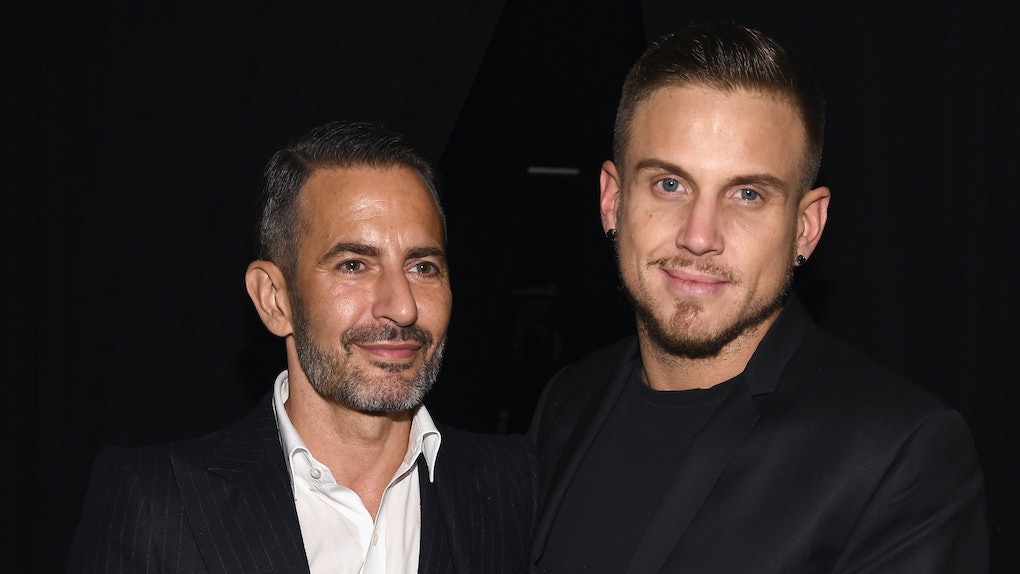 Close your eyes and imagine the proposal story of glamorous fashion designer Marc Jacobs. When I picture his engagement, I imagine him somewhere chic. Maybe he and his bae, Charly (AKA "Char") Defrancesco, are sipping champagne in matching plush, white robes as they sit by the fire in their suite at an ultra-cool NYC hotel after a particularly taxing fashion week, as Marc decides this is who he wants to unwind with forever. But no. My vision couldn't be more wrong. In fact, Marc Jacobs and Charly Defrancesco got engaged yesterday... at their local Chipotle. You know. Casual.

Yep, that's right. One of the most powerful men in the fashion world decided to spend the rest of his life with his boyfriend at the same place you go to get your hungover burrito every Saturday morning. Of course, Marc's engagement wasn't just any old boring proposal at Chipotle. He went big. And by that, I mean the dude literally got an entire flash mob to surprise Charly.

Naturally, the flash mob set their dance to the best song ever: Prince's "Kiss." Marc posted the video of the whole proposal on Instagram, along with the caption:

And this happened..."Charly Defrancesco will you marry me”? #flashmobatchipotle #moves THANK YOU everyone for making this happen video @plural_nyc @laurengerrie @seandon212 @1.800.newbold And to my Ride or Die fiancé @chardefrancesco I LOVE YOU❤️

Char, a model and luxury candlemaker, also posted a video of the night on Instagram with the caption:

GET READY FOR THE ALL TIME GAG!!!!! Thank you to everyone who helped make this happen. @laurengerrie #moves crew @1.800.newbold @chipotlemexicangrill @plural_newyorkcity @seandon212

For those of you who weren't able to watch the whole thing, let me give you a little recap. A group of seemingly ordinary people do a pretty extraordinary dance to Prince's "Kiss." Everyone's loving it. Even the Chipotle employees are grooving. Charly, who already seems so surprised by the flash mob, turns around to find 54-year-old Marc down on one knee with a ring in hand. He's even more surprised by this. Naturally, Charly says yes, they kiss, and your heart is sufficiently warm and fuzzy.

If you're wondering why Marc chose yesterday of all days to pop the very special question, it's because yesterday also happens to be Char's birthday! Earlier that day, the designer posted this hilarious picture of the two of them on Instagram:

He paired the post with the caption, “HAPPY BIRTHDAY to the love of my life!!”

OK... so, like, can you say best birthday present ever?

While Vanity Fair reports that when, exactly, their relationship began is up for debate, the couple became Insta official in December 2015. Another fact we know for certain about the couple? Dating a fashion icon has definitely changed Char's outlook on certain fashion trends. For example, earlier this year, he told the Daily Front Row that dating Marc has sparked a newfound appreciation for dad sneakers:

Here's to hoping that the happy couple struts their stuff down the aisle dressed in the ugliest dad sneakers money can buy. If they can make a Chipotle proposal chic, you know they'll find a way to make that work.