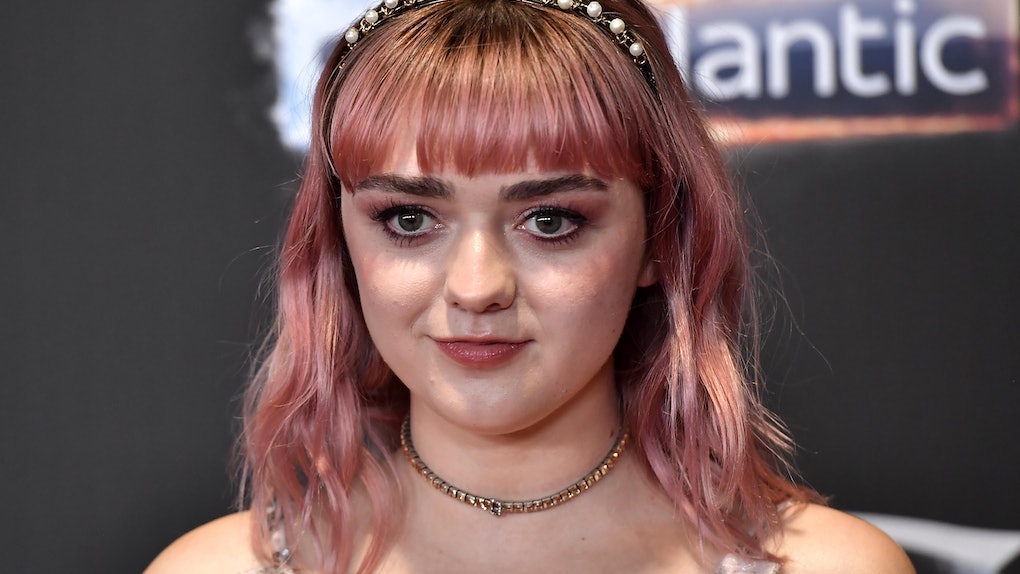 Game of Thrones fans are hardly strangers to on-screen surprises. Seriously, the list of "OMG I'm screaming" scenes have been plentiful since day one. That said, Sunday night's sex scene between Arya and Gendry was so much, I'm officially shook until the end of time. And if witnessing it on screen was that intense, I can't even imagine what it was like to film. Fortunately, Maisie Williams' quotes about Arya and Gendry's sex scene have shed some serious light on what it was really like to film Arya Stark's first time.

According to Entertainment Weekly, GoT showrunners David Benioff and Dan Weiss are notorious for pranking their cast members by sending them fake scripts with absurd plot twists. Naturally, Williams thought this was the kind of stunt they were pulling by writing in a sex scene for Arya. "At first, I thought it was a prank," Williams told Entertainment Weekly. "I was like, 'Yo, good one.' And [the showrunners were] like, 'No, we haven't done that this year.' Oh f*ck!"

"I got to the read-through and I'm reading the scene and thought, 'Oh we're actually going to do this. When do I shoot this? I need to go to the gym.' A whole list of things." After all, showing skin on such a massive scale is enough to make even the most seasoned actor blush.

As for actually shooting the vulnerable scene, Williams revealed everyone was really respectful. "No one wants to make you feel uncomfortable which kind of makes you feel more uncomfortable, because no one wants to look at anything that they shouldn’t look at, which in turn makes you feel like you look awful because everyone is kind of like [*averts eyes*]," she said. "You want people to act more normal."

Once everyone got past the initial jitters of filming such an intense scene, the process was a bit more streamlined. "By the end we’re rushing to finish the scene and David [Nutter] is going, 'OK, you’re going to come in and do this and do that and, great, take your top off' — and then walked off. And I’m like… 'OK. Let’s do it.'"

Another really awesome fun fact is that Williams had complete control over how much skin would be shown in the scene. "David and Dan were like: 'You can show as much or as little as you want,'" she explained. "So I kept myself pretty private. I don’t think it’s important for Arya to flash. This beat isn’t really about that. And everybody else has already done it on the show, so… "

It's definitely not one bit surprising that Joe Dempsie, who plays Gendry, found shooting such an intimate scene with an actor he's known for so long to be a bit awkward. "It’s obviously slightly strange for me because I’ve known Maisie since she was 11, 12 years old," Dempsie told Entertainment Weekly. "At the same time, I don’t want to be patronizing toward Maisie — she’s a 20-year-old woman. So we just had a lot of fun with it."

It turns out, Williams first learned of her steamy scene from co-star and BFF Sophie Turner. Turner told EW that she read the script, called Maisie, and asked, "‘Have you read it yet?' And she’s like, ‘I’m midway through Episode 1.’ And I’m like: ‘This scene, this page, read it! This is awesome!’ She was very happy," Turner said. Well, if the first two episodes are any indication, it's probably safe to assume that the rest of the final season will be full of more drama than we can even imagine. Stay tuned people!