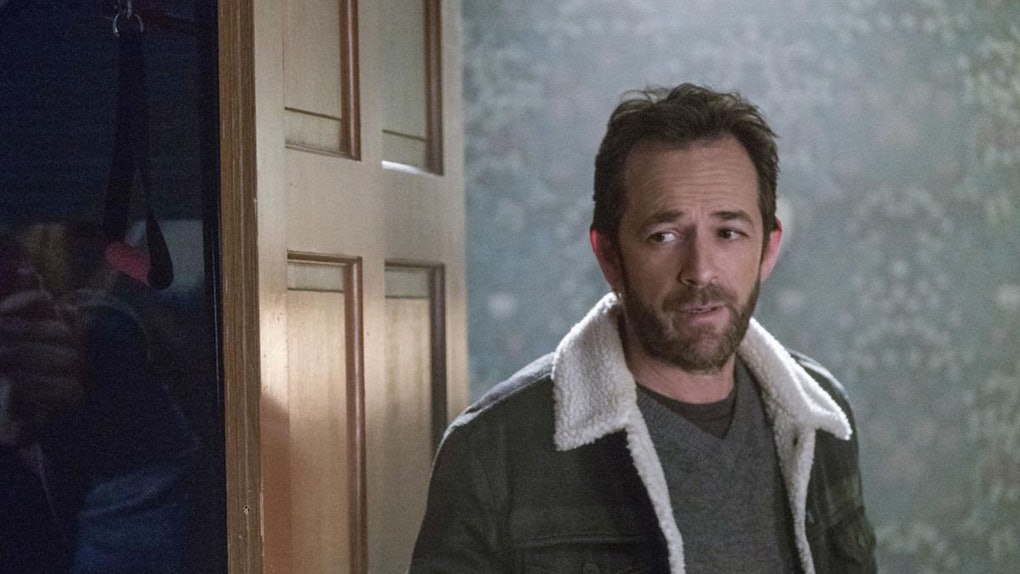 Less than two months after actor Luke Perry died following a massive stroke, Riverdale fans are about to learn what will happen to Perry's Fred Andrews in the wake of the real-life tragedy. Following the teen drama's first week back after a brief hiatus, Luke Perry's final Riverdale episode airs this week, and we're definitely not ready for this last goodbye.

Best known for playing brooding loner Dylan McKay on Beverly Hills, 90210, 52-year-old Perry died on March 4 after suffering a stroke on Feb. 27. In recent years, he developed a following among younger people thanks to his role as Archie's father Fred on Riverdale, joining several other former teen stars as characters' parents. At the time of his passing, Perry's team said in a statement, "The family appreciates the outpouring of support and prayers that have been extended to Luke from around the world, and respectfully request privacy in this time of great mourning."

Riverdale also temporarily shut down production when Perry's death was announced. Amidst dozens of online tributes from Perry's co-stars and former colleagues, The CW and Riverdale executive producers released a statement saying, "A father figure and mentor to the show’s young cast, Luke was incredibly generous, and he infused the set with love and kindness."

Now with Riverdale's Season 3 finale in sight, series creator Roberto Aguirre-Sacasa confirmed Perry's final appearance in an April 21 tweet. Announcing that the show's April 24 episode was the last Perry filmed, Aguirre-Sacasa said, "As always, Fred’s imparting words of wisdom to Archie. A beautiful, true moment between a father and his son. Wish these scenes could go on forever..."

It's still unclear how Riverdale will address Perry's death. When an actor working on a current TV series dies unexpectedly, creative teams often decide that the character will follow in his or her footsteps and use the opportunity to produce a heartfelt tribute episode. But in this case, Fred passing away might be too abrupt and heartbreaking to actually happen. What with all of the action that usually occurs in a Riverdale episode, can writer squeeze in a sudden death?

According to IMDb, the summary for April 24's "Chapter Fifty-Four: Fear the Reaper" reads:

It looks like Archie will turn to Fred for a pep talk after winning a boxing rematch against Randy (Darcy Hinds), who passed out after taking the "G" drug in last week's "Jawbreaker." Given Fred's nurturing and fatherly scenes in Riverdale's most recent episodes, this detail is no surprise, but we can expect Fred's time with Archie to carry extra weight this week.

While he could always appear in flashbacks in future episodes, Perry will continue to be a crucial element of Riverdale, as the cast and crew dedicated the rest of the series' run to him. We'll have to wait and see how Riverdale says goodbye to Fred, but it's safe to say we should keep a box of tissues nearby during the episode. Season 3 of Riverdale continues on Wednesday, April 24, at 8 p.m. ET on The CW.

More like this
Kat Ahn's Quotes About 'The Office's Benihana Episode Call Out Asian Stereotypes
By Dylan Kickham
These Fake 'Riverdale' Brand Names Are Even Better Than The Real Thing
By Rachel Varina
When Will 'Riverdale' Season 5 Return In 2021? Its Mid-Season Break Is Long AF
By Rachel Varina
Stay up to date