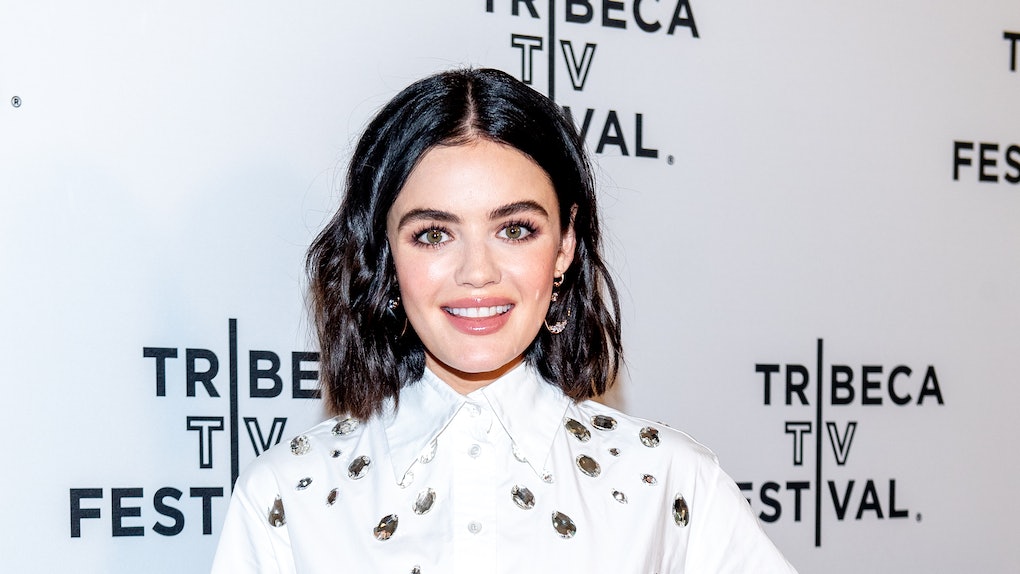 When I first heard about Katy Keene, the new CW show taking place in the same universe as Riverdale, I immediately began preparing myself for something dark. And once I found out Lucy Hale — a queen of the eerie teen drama genre — was starring in the project, I was convinced there had to be a spooky element to it. However, instead of creepy characters and heart-pounding mysteries, the upcoming series promises uplifting storylines about fashion, friendship, and following your dreams. In fact, Lucy Hale says she hopes Katy Keene will be a source of both comfort and inspiration to viewers — a far cry from the moody themes of Riverdale and Pretty Little Liars.

Expected to premiere in early 2020, Katy Keene will focus on the titular character and her group of friends who are all trying to “make it” in New York. There’s Katy (Hale), who is an aspiring fashion designer; Josie (yes, that Josie, Ashleigh Murray), who left Riverdale to pursue her music career in the big city, Jorge (Jonny Beauchamp), a highly talented triple threat and drag queen, and Pepper (Julia Chan), an ambitious it-girl with a mysterious background. Though the show centers on Katy, fans should expect to learn a lot more about her besties — and the other interesting characters who are in her and her friend’s lives — as the series goes on.

During Katy Keene’s world premiere at the Tribeca TV Festival, Hale explains some exciting details about this project to Elite Daily. “It just leaves you feeling so optimistic about life and whatever dreams and goals you have,” she says. “Each of the characters of the show has a specific endgame, end goal, dream.”

Hale reveals she feels particularly close to the show because she sees a lot of herself in Katy. “I moved to LA at a really young age with my mom. For a while, [I was] trying to become an actor and just auditioning, hearing ‘no’ all the time, and so I see this struggle.” she says. “I see myself in Katie because I’ve been there … I know what she’s going through and our stories are so similar. It’s so cool to tap into that.”

Beyond the characters’ ambition, there is still a lot about Katy Keene to look forward to. In addition to watching the group of friends pursue their careers, fans will also get to follow along while the characters live their lives as young and fun residents of the Big Apple. It sounds, as Hale puts it, like the show will be “a nice escape” from reality. “There’s so much crazy stuff happening in the world right now, this show will make you feel really good,” she says.

Of course, fans can’t help but wonder what other fun stuff Katy Keene has in store for them. While she can’t say much — the show is still in the process of filming its first season, after all — Hale reveals her high hopes for a chance to sing in the new series. “I know Josie is sort of the singer of the show, but I think almost every actor in the show is musical, so I’d be shocked if we didn’t all, at some point, burst into song,” she says. So maybe Katy Keene will have some things in common with Riverdale after all.