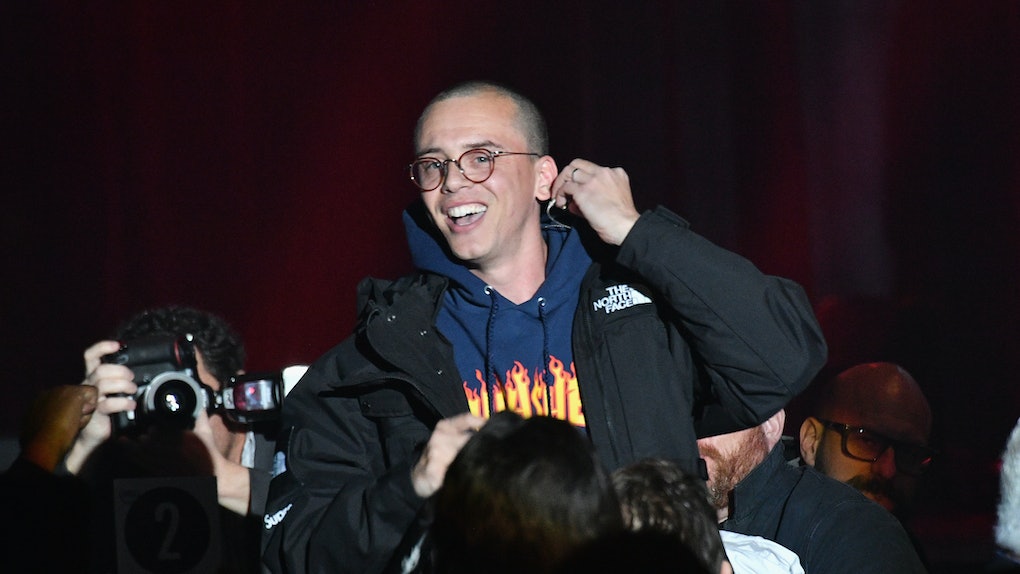 Uh, Logic is going to be a dad? Yeah, I'm pretty sure that's what he's just revealed in his new song! The rapper dropped a freestyle on Aug. 19 called "No Pressure," during which he talks about a gold chain he wants to pass on to his son. He has no kids as of late, so if these lyrics are to be taken as reality, then Logic's "No Pressure" lyrics have revealed that he's going to be a dad soon. Ha ha, no pressure!

The song came with a video of Logic performing the freestyle. It's a pretty basic video, so let's get down to the business of getting into these lyrics. While it's mostly about the things in the music industry he doesn't like, there are two moments during the freestyle where the rapper says he's having a kid, and it's a baby boy.

"I wear this 24 karat solid gold rollie for my son as an heirloom," he raps, giving fans the first mention of his reported child. He doesn't mention the baby again until the end of the song.

He doesn't rap that reveal, though. The rap ends, and then he says, "And I'm havin' a little baby! Surprise, it's a little baby boy. F*ck TMZ, they can't get the scoop on that sh*t. Welcome little Bobby to the world one time. Alright, I'm done. That's it, yeah."

You can check out Logic's "No Pressure" freestyle here.

And here are all the lyrics, according to Genius.

Ayo, I never had a car‚ that's why I hate the fucking bus

Took the 61 to Germantown and hear them guns bust

Call it static‚ headphones on‚ it's Illmatic

On my Rosa Parks in the back writin' like B Rabbit

How I carry it, gimme the beat and then I'ma bury it

Too alive like twins in the womb, come hither‚ consume

All of my memories from past and present like two identities

Logic fallin' off is an obscenity, top five I bet I be, steadily listening

Crazy how one day the legends forget that they equal

On this Under Pressure sequel we not takin' it back, we keepin' it pushin'

People scared of change, but you'll find me deep in a cushion

When I bust no thrust, world we livin' in is fucked

'Til your new shit is your old shit, son, in this sun, let me get some

Not for lookin' dope as I rhyme

As a representation to give your family your time

Searchin' for love in the industry you'll be let down

I'm close to the cliff, like Rick Dalton in the booth

Money ain't the key to happiness and this the proof

But a few of us resurging within a second, renaissance

And I know that my death give times

Keepin' a legacy goin' by flowin' so involuntarily seamless

Now listen up, check it

Fuck the industry, know we keepin' it real up in these streets

Came up in a world that's off its axis

All that's promised, death and taxes

Cordae and JID, but that shit ain't free, now check it (Sinatra)

Yeah, and on that note I keep it G

Like track four, kick in the door by BIG

Don't believe me, look that shit up, I promise you'll find the key

Backyard sunset, sippin on that Bubly

Ice Cube in my nightcap, it was a good day

You heard what the hood say, Logic what you should play

Nothing but peace, love, and positivity to the whole wide world

RattPack, you already know what it is man

BobbyBoy Records, we out this bitch (Logic)

And I'm havin' a little baby

Surprise, it's a little baby boy

Fuck TMZ, they can't get the scoop on that shit

Welcome little Bobby to the world one time

Logic doesn't say who the mother of his son is, but it's safe to assume it's Brittney Noell, the clothing designer he's in a relationship with. Logic was previously married to Jessica Andrea. They got married in 2015 after two years of dating, according to People, and split in 2018.

“After two years of marriage, we have come to the loving conclusion that we are much better as friends," the joint statement announcing their split said. "As entertainers, we have made every aspect of our lives public, yet we would appreciate your respect and privacy on this issue."

Logic started dating Brittney Noell not long after, and they're rumored to be engaged. They haven't confirmed the new themselves, but Noell was reportedly seen celebrating what appeared to be a bachelorette party in June 2019. An Instagram her friend posted from that reported bachelorette party showed Noell wearing a white robe with something bedazzled on the back, and it honestly looks like it could be the letter B. Could it say bride?!

TMZ had reported in July that he and Noell got a marriage license, which perhaps is why Logic name-dropped the outlet in his freestyle. Clearly, he didn't want TMZ leaking any more of his big news!

Congrats on your little mini Logic!