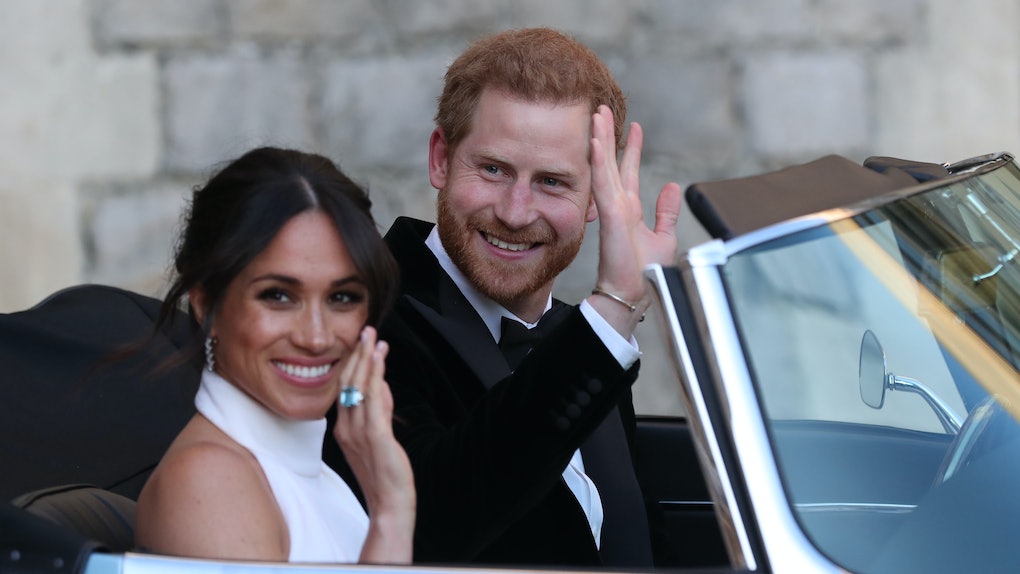 OK, whoa. Just when you think Meghan Markle, the Duchess of Sussex, might once and for all be settling into her royal life with her new husband and baby, the media monster rears it's ugly head once again. This time, reported old friend and UK reporter Lizzie Cundy made some ugh statements about Meghan prompting fans to yet again call out, "Leave our girl alone!" Lizzie Cundy's claims Meghan Markle asked for help finding a British man aren't the worst thing you could say about someone, it just feels a little... what's the word? Contrived? Unnecessary? And, if true, TMI? Elite Daily reached out to Kensington Palace for comment on Cundy's claims but did not hear back by the time of publication.

Here's why Cundy's statements feel icky: haters have often called Meghan things like opportunistic or have argued she could be somewhat of a social climber. Cundy suggesting Meghan was always "looking for a British man" essentially takes away from her marriage and relationship with Prince Harry and trivializes their life together. According to Cundy, she and the Duchess were friends long before Meghan met Prince Harry, which is when Meghan confided in her about her hopes to meet someone from the UK.

The Sun reports that Cundy said, "We were having a girly chat and then [Meghan] said, ‘Do you know any famous guys? I’m single and I really love English men.' So I said, ‘We’ll go out and find you someone.’” Cundy explains she initially was thinking of Chelsea soccer players who might be a good fit. (Cundy herself was previously married to former Chelsea defender, Jason Cundy.) She explained:

I was thinking about some of the Chelsea lot and I thought of Ashley Cole as he’d split from Cheryl. I showed her a photo of Ashley and she was like, ‘Oh yeah, he’s cute. Does he have a reputation?’ I was like, ‘Well, yeah, but you’re only here to have a bit of fun.’

Cundy added, "I remember her asking about my boys. She was very interested and asking lots of questions. Usually, you find actresses just talk about themselves. She was really fun, really sweet. I liked her."

According to Cundy, she was shocked when she heard about Meghan and Harry. "I texted saying, ‘Oh my god, I heard about Harry.’ And she was like, ‘Yeah I know. We’ll try and hook up.’" Cundy said. However, according to Cundy's claims, she and Meghan's friendship dissolved quickly after that. She even wondered if the Palace told Meghan to cut ties with anyone from the press.

"She was probably told by the Palace to end contact with people she befriended in the media," Cundy said. "I was literally ghosted by her." This is the same unfortunate phrasing Meghan's father, Thomas Markle, has used in the past with his daughter, too. Alas, fans can read more about Cundy's relationship with Meghan in her book, Tales From The Red Carpet. (Well placed. *eye roll*)

Once again, I feel the need to come to Meghan and Harry's defense. Just let the Duke and Duchess live, you guys! Who cares if Meghan has or has not always had a thing for English guys?! Frankly, I do too! A man with an accent who is predisposed to love crumpets? Sign me up.