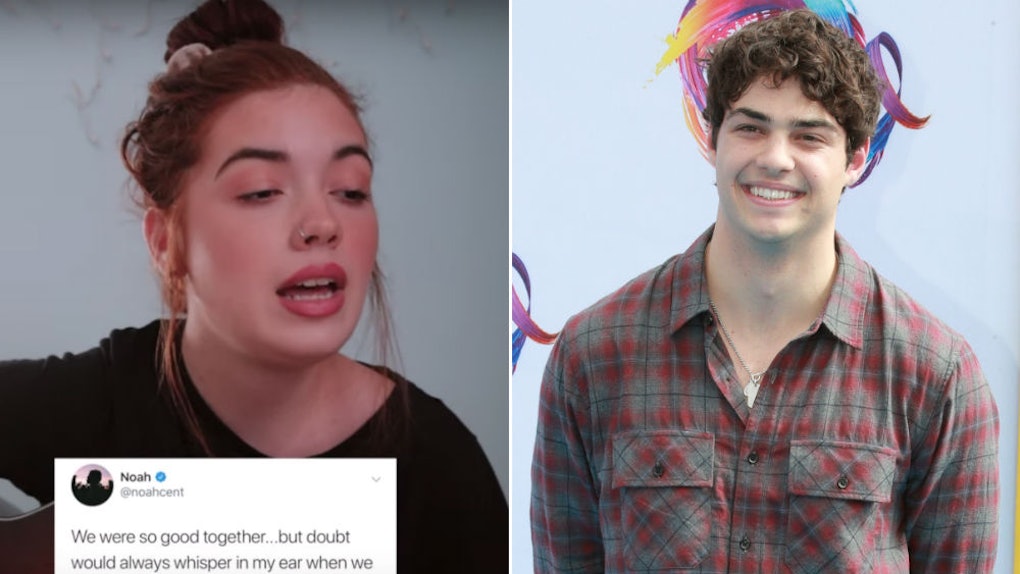 The creative process is different and unique for every musicians. Some trek to the middle of nowhere to get their creative juices flowing. Others have said melodies come to them in their sleep and for one woman, well, her inspo was sitting on her Twitter timeline. Liz Bissonette's song using Noah Centineo tweets is legendary, really.

Noah Centineo is the current king of Netflix rom-coms. In 2018 he starred in two of the streaming platform' hugely viral romance movies: To All The Boys I've Loved Before and Sierra Burgess Is A Loser. He'll also be reprising his role as the super hunk in the To All The Boys sequel. In 2019, he then starred in another rom-com The Perfect Date. Naturally, he speaks fluent romantical ⁠— y'know, the language of sometimes cheesy, sometimes insightful, but pretty sweet coming-of-age one-liners. So obviously, that's what he tweets about. Love. Oh, and clearly any random thought that pops into that wonderful brain of his.

For example, Centineo tweeted "We don’t love the way we want to be loved," and "Today is the day. I will blast 'I’m On A Boat' by The Lonely Island while in fact being...on a boat" all on the same day. Random. But, a creative mind like Liz Bissonette saw these tweets for what they truly are — poetry.

The 22-year-old musician, who is also a YouTuber, uploads covers and her own original songs to her channel. In her latest video uploaded Aug. 10, Bissonette challenges herself to create a song using only tweets from Centineo. Bissonette brilliantly weaves a beautiful ballad filled with emotion and depth out of Centineo's many cryptically deep tweets. Like, the lyrics actually make sense. She did that.

"Obviously, I want the ones I pick to have a theme so that it works 'cause I want the song to be, like, good,'" she said in the video. "I wanna do like a deep, dramatic love song," she added before taking viewers step-by-step through her creative process.

FYI, step one is "pick tweets." According to Bissonette, the most difficult part was getting the the melody down and stringing her favorite tweets together. "I wanted it to be as many of his words as possible without having to add my own stuff," she said. Honestly, that's what makes it so impressive.

Take a listen to the track below. It starts at the 8:52 mark.

The song is already a viral hit across the internet. A clip of the YouTube video posted to Twitter has already amassed more than 68,000 views and the comments that follow are filled with users who are completely floored by the unique track. "Why are the lyrics actually beautiful," asked one user.

"Why does this slap so hard omg," posed another.

Many fans also tagged Centineo, in hopes of him checking out the viral track. "Wait I want @noahcent to see this and say somethin’. It’s actually really good & catchy aha," tweeted another fan. Noah Centineo has yet to catch on, but when he does, I hope he gives this girl a well-deserved shout out because this song goes.