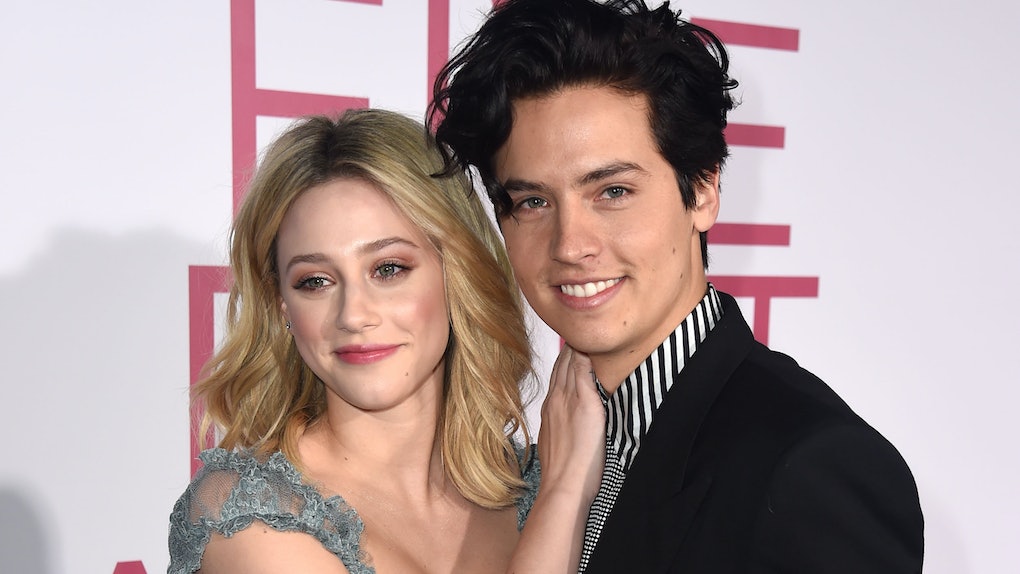 Lili Reinhart and Cole Sprouse are Hollywood's "it" couple. Since the People's Choice Awards honor the most influential figures in pop culture, fans expected the couple to arrive hand-in-hand at the award show on Nov. 10, but sadly, that didn't happen. Sprouse showed up to the red carpet solo. But just because Reinhart wasn't there in person, doesn't mean she wasn't there in spirit. In fact, Reinhart celebrated Sprouse's big PCAs win in her own special way. Lili Reinhart's reaction to Cole Sprouse's People's Choice Awards win was so sweet.

Both Riverdale stars were up for several awards at the PCAs. Reinhart was nominated for Drama TV Star and Female TV Star, while Sprouse was up for Male TV Star and Dream Movie Star. Fans didn't have to wait long to see if either of the actors took home awards. Right at the start of the show, Sprouse won Dream Movie Star for his role as Will Newman in Five Feet Apart.

Sprouse began his speech by joking about the fact he beat out Leonardo DiCaprio and Brad Pitt for the award. "Man, there are so many other newcomers in this category, specifically DiCaprio and Pitt," he said. "Just keep your heads up. Don’t let this dishearten you. You guys are going to be here one day. The three of us, we’ve had this competition for a long time, but, apparently, this was my year."

Sprouse continued his speech on a more serious note by bringing attention to cystic fibrosis, a disease which his Five Feet Apart character experienced.

"I think with Five Feet Apart, our mission statement was to bring cystic fibrosis to the audience, to a public forum of discussion. It's a really underrepresented disease and thanks to all you guys who watched it. I think it [the movie] hit its mark and we really hit our goal," Sprouse said.

Following his speech, Reinhart took to Instagram to congratulate her BF, writing, "Congrats, to my people's choice best baby."

This past summer, rumors swirled that Sprouse and Reinhart split after two years of dating, but by the looks of Reinhart's adorable Instagram shoutout to Sprouse after his PCA win, the couple is still very much together and aren't afraid to show it.