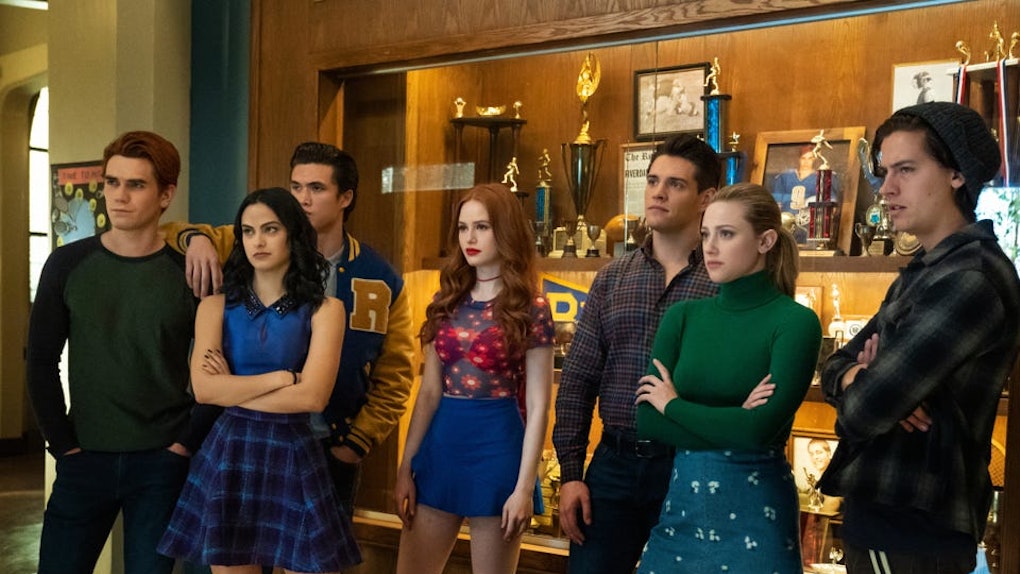 There's no better way to unwind after throwing your serial killer dad into prison, running an underground speakeasy, or hanging out with the corpse of your dead brother than by having some fun on TikTok. (I mean... right?) While Betty Cooper, Veronica Lodge, and Cheryl Blossom may not always see eye-to-eye on Riverdale, the actors who play them are the definition of squad goals behind the scenes. Need proof? Just scroll through Lili Reinhart, Camila Mendes, and Madelaine Petsch's TikTok for some hilarious videos documenting their friendship.

As Riverdale prepared to enter production on its fifth season in September 2020, the teen drama's three female leads joined TikTok together by creating a joint account. What else are you going to do when you're quarantining with you co-stars amid a global pandemic? Reinhart, Mendes, and Petsch clearly had a ton of fun making their shared profile, which posts under the mashed-up name Lamila Petschart. As a nod to their drastically different hair colors (an iconic aspect of their Riverdale characters), the account's handle is @blondebrunetteredhead. Yep — they're basically the real-life Powerpuff Girls, which they proved with their group Halloween costume this year.

The first post from Lamila Petschart came at the beginning of September, showing Mendes participating in a TikTok trend in which someone is interviewed without being able to hear the questions being asked. Mendes actually did a surprisingly great job at figuring out Reinhart's questions, even answering the question "What are you most afraid of?" with a very relatable "third grade."

Reinhart and Petsch also took turns in the hot seat, with Petsch doing a pretty good job at the challenge, while Reinhart definitely struggled (unless her celebrity crush really is the Grinch).

The trio hasn't posted too many videos yet, but they've come together for their fair share of TikTok challenges, including a hilarious attempt at dancing to Cardi B and Megan Thee Stallion's "WAP" and a masked-up dance to "Fergalicious" by Fergie. In keeping with the creepy vibe of Riverdale, they also posted their own haunting rendition of "Three Blind Mice" called "Three Sad Girls."

Reinhart, Mendes, and Petsch also use the shared account to post some funny behind-the-scenes antics from the set of Riverdale, including this clip of them messing with co-star KJ Apa.

Basically, the TikTok account is a must-follow for all Riverdale superfans. Even if you don't watch the show, it's still a lot of fun to find out what silly videos Reinhart, Mendes, and Petsch will post next.