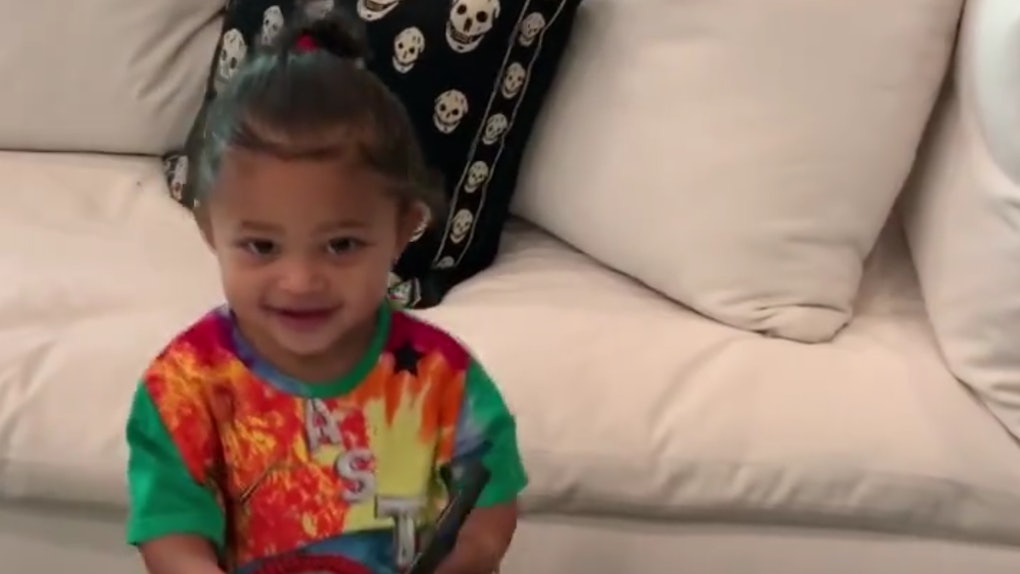 OK, so let me first preface that the makeup mogul has not officially dropped a single, though her singing ability (or, lack thereof) is taking the internet by storm. It could be the next "Old Town Road."

On Oct. 10, Jenner posted a video of herself giving fans an exclusive tour of her Kylie Cosmetics headquarters and it's big, y'all. It even includes a playroom for Stormi. Upon entering the room, Jenner sang "rise and shine" a little (read: very) off-key to her already-awake daughter. Meme queens everywhere didn't miss a beat in seizing the opportunity to create a viral moment.

But really, it's all in good fun. The one-line tune has become a living meme — and at this very moment, Jenner's Instagram bio. She even has a "Rise and Shine" remix on her phone and played it for Stormi.

On Oct. 17, Jenner shared an adorable video of her 20-month-old jamming to "Rise and Shine." Stormi sweetly bobbed up-and-down in a tie-dye tee while Jenner yelled in excitement, "Yesss. You like it?" Too bad that moment was hilariously cut short as Stormi answered back, "Daddy sings."

"No baby, that's mommy. Mommy's singing," Jenner told Stormi, who had clearly made up her mind and requested Travis Scott's music. "Daddy sings," she told her mom, again.

Honestly, the entire moment is too cute, and kudos to Jenner for being such a good sport about the whole situation. Since the video went viral, Jenner shared a "Rise and Shine" meme on her account with her face as a sun.

Numerous iterations of the initial YouTube video have also been made, including one that labeled Jenner as "Insomnia at 4 a.m." and replaced Stormi with Kim Kardashian from that awkward Yeezy ad. Yes, that meme lives on. Kardashian retweeted it with three crying laughing emojis.

Kardashian wasn't the only celeb to join in on the fun. Miley Cyrus took to her Twitter to share a version of the meme that featured Jenner as a contestant on The Voice and Cyrus, who was a former judge on the singing competition show, reacting to her performance. This is another one that'll have you in fits of giggles.

Ariana Grande isn't featured in any "Rise and Shine" memes (to my knowledge), but she's joined in on the fun the best way she knew how — by jokingly asking to sample it.

Even if the one-line single isn't Stormi's top request, the rest of the world seems to be loving it. Any chance there's a Travis Scott collab coming soon?

More like this
Olivia Rodrigo's Reaction To Getting Her First Parking Ticket Was Priceless
By Brandy Robidoux
Is Taylor Swift's "Mr. Perfectly Fine" About Joe Jonas? Sophie Turner's Instagram Has Fans Curious
By Brandy Robidoux
Scott Disick's Quote About Seeing Kourtney Kardashian Date Is Heartbreaking
By Candice Jalili
Stay up to date