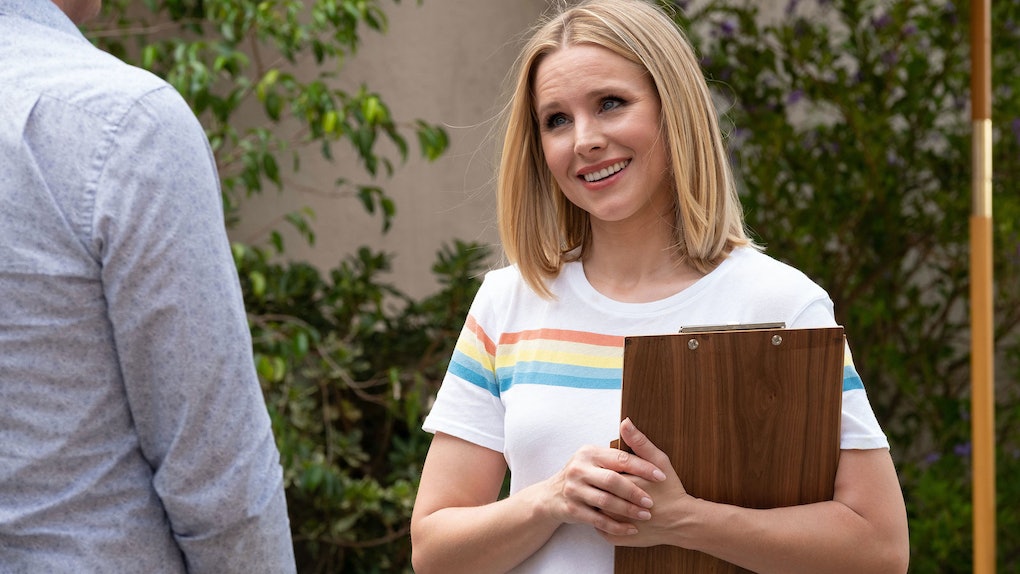 Eleanor Shellstrop is not the only one taking on a bigger responsibility in the upcoming fourth season of The Good Place — Kristen Bell is adding another role as well. The actress will be stepping behind the camera along with starring in the new season of NBC's afterlife comedy as the director of an episode. Yep, Kristen Bell will direct a The Good Place Season 4 episode as confirmed by TVLine, and the episode will be her directorial debut.

So far, the only real details we know about Kristen Bell's directorial debut on The Good Place is that it is happening in Season 4. The new season will consist of 13 episodes — the same number as the first three seasons of the series — but it has not yet been revealed which of these episodes will see Bell in the director's chair. Not only does this mark Bell's first-ever directing job, but it is also the first time on The Good Place that a cast member has also served as an episode director. Encouragingly, it seems to be a growing trend in modern TV shows to allow a star actor to flex their directorial muscles in an episode: Krysten Ritter is directing an upcoming episode of Jessica Jones and Sarah Paulson directed her co-stars in an episode of American Horror Story: Apocalypse this past fall.

Much like Kristen Bell's increased responsibilities on the upcoming Season 4, her character of Eleanor Shellstrop has also found herself in a new position of power at the very end of last year's third season. Spoiler alert: Do not read on if you still have not finished watching The Good Place Season 3. Where the twisty and constantly unexpected story of The Good Place left off is strangely enough, back where it started. After running and hiding from Gen the judge and The Bad Place administrator Shawn, the group of humans and Michael finally had a sit-down with the immortal beings to figure out a better plan for gauging earthly points. Chidi managed to convince Gen that they are proof humans are capable of improving in the afterlife, and they all agreed to run one final test: Shawn would get to choose four recently deceased humans headed for The Bad Place to instead live in Michael's fake Good Place neighborhood. If the humans notably improve, it proves Chidi's point and the system will be reworked, but if they do not, then everyone, including Michael, will be doomed to an eternity of torture in The Bad Place.

But when Michael has a panic attack right as the first new inhabitant arrives, Eleanor steps up and introduces herself as the Architect of the neighborhood. Everything seems to be working relatively well, until Chidi's ex Simone arrives as Shawn's second selection. In order to protect the experiment and their last chance at avoiding The Bad Place, Chidi makes the heartbreaking decision to have his memory erased, rendering him as another inhabitant of the neighborhood with no memories of his time with Eleanor.

The Good Place Season 4 is expected to premiere this fall on NBC.