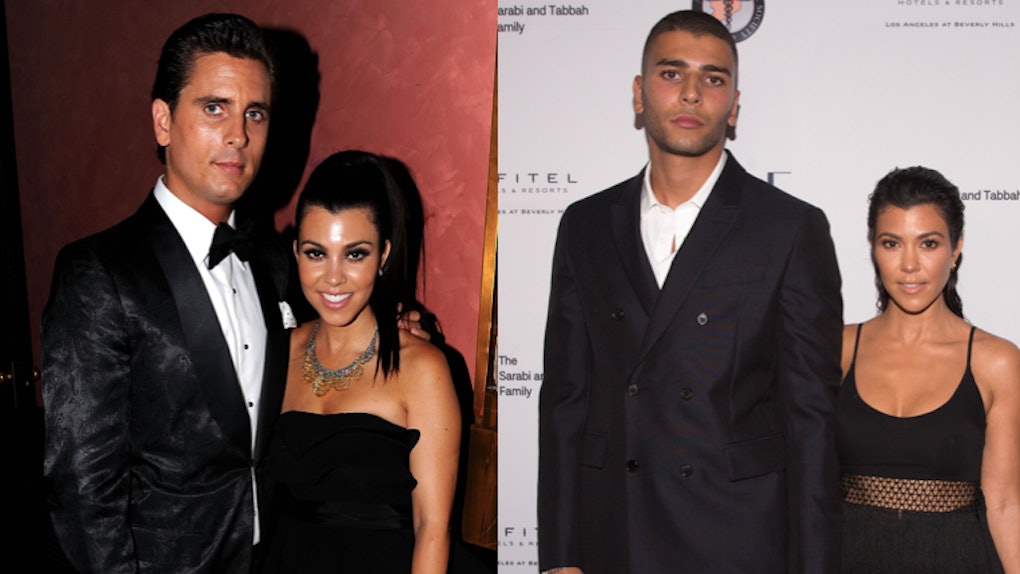 Say what you will about the Kardashians, but there is never a dull moment in this family's love lives. That includes Kourtney, who, of all three oldest sisters, has probably had the least tumultuous dating history, relatively speaking. From her long-term relationship with Scott Disick to rumored romances with Luka Sabbat (which Sabbat recently denied), the eldest Kardashian sister has always kept us guessing. That is why I wondered which of her former flames she had the best connection with, and if we could tell by taking a closer look at Kourtney Kardashian's body language with her exes.

To help with this quandary, I reached out to Traci Brown, body language expert and author of Persuasion Point: Body Language and Speech for Influence, and asked her to analyze photos of Kardashian with all three of her most recent, rumored beaus to see what — if any — connection was discernible between them. Also, I wanted to find out if she did indeed have an ex who was her favorite. Turns out, Kardashian does have one ex that stands out from the rest. Are you as intrigued as I am? Good! Here is what Brown saw in the photos of Kardashian and her rumored exes.

Even if you don't follow the Kardashians religiously, there is one of Kourtney’s relationships most people can name — and that, of course, is her nine-year romance with Scott Disick. While their ups and downs were chronicled on Keeping Up With The Kardashians, the former couple has settled in to peaceful co-parenting of their three children. This is no doubt helped in part by the love Brown sees between these former flames. In this photo, taken of the two while they were still together, she sees a real comfort between them. “She's draped over him,” Brown points out to Elite Daily. However, Brown also points out that the body language in't exactly being reciprocated by Disick. “He's not into the moment,” says Brown. “They certainly aren’t matching emotions or any body language.”

After her split with Disick, Kardashian began dating model Younes Bendjima, a relationship that lasted about a year. While the couple clearly looked gorgeous together, Brown actually doesn't see much of a connection between them in this image. “It's pretty clear he's not that into her,” says Brown. “His shoulders are facing away from her, his feet are pointing away from her and there's no joy on his face,” she notes. There is not much more coming from Kardashian herself, Brown says. “He just wants outta there and she wants the camera," she explains. "Neither look that happy so they’re certainly matching that.”

Kardashian’s most recent, rumored relationship was with actor Luka Sabbat. While Sabatt has put the rumors to rest that they were not in fact a couple, the two were seen spending a lot of time with one another over the last several months. However, what Brown sees between them seems to confirm their denials of a real connection. “She's not really paying attention to Luka, he's walking behind her letting her lead,” notes Brown. “She’s ignoring him all together choosing to focus on her phone.” Brown's overall assessment of Kardashian and Sabbat seems to be that there wasn’t really much between them. “They're not quite in step. So I wouldn't say this is a great connection,” Brown says.

Brown concludes that, of all her relationships, the one Kardashian has the strongest and most obvious connection to is, of course, also the person she was with the longest. “Her favorite from these pics is for sure Scott,” says Brown. But really, did we ever expect another result? There is a reason some folks, myself included, would be kind of thrilled to see them back together. There is a chemistry there that is hard to deny. Well, only time will tell... so, in the meantime, let's just hope Kardashian ends up with someone she’s just as passionately connected with as they are to her. She, like all of us, deserves her happy ending.