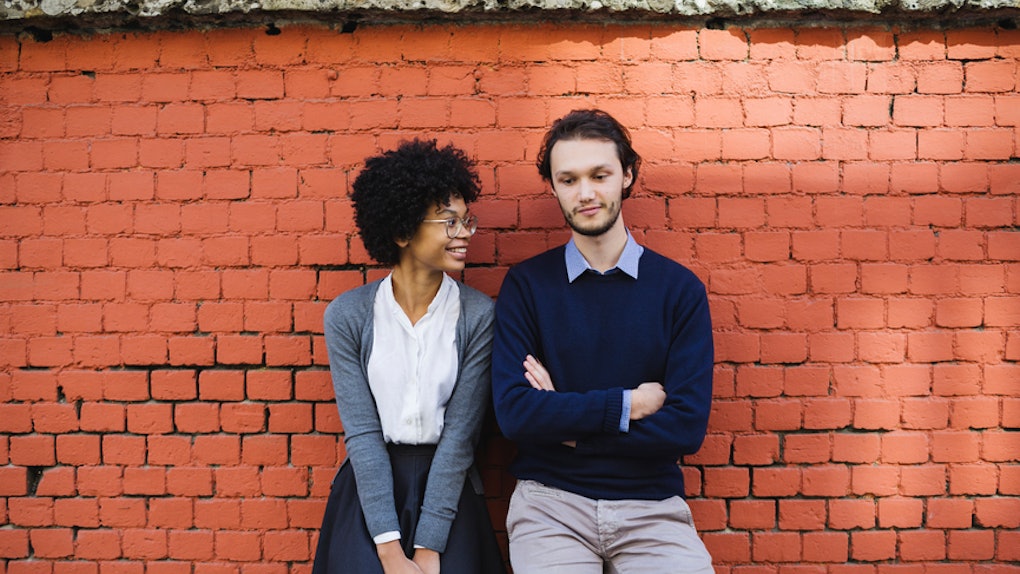 Knowing When Your Partner Is Sad Isn't Easy For A Lot Of People, Science Says

Being in a relationship is complicated. The entire thing is just so much more than the happy montage of cute snuggles and silly dates you see in rom-coms. Of course, there are the bigger fights and the more obviously joyful times together, but for the most part, relationships have a lot of subtlety about them. There's a lot of reading between the lines and trying to understand how your partner needs your support, especially if they don't overtly tell you. Similarly, you need to master the art of knowing when your partner is sad. I don't mean being understanding when they tell you they're sad; I mean realizing they're sad before they even have to mention it.

Essentially, we're talking about picking up on some pretty important, yet maybe subtle, cues here and — shocker — a new study of from Southern Methodist University which examined the daily diaries of 51 couples' individual moods and the perceived moods of their partners, found that most people aren't that great at it.

"We found that when it comes to the normal ebb and flow of daily emotions, couples aren't picking up on those occasional changes in 'soft negative' emotions like sadness or feeling down," family psychologist Chrystyna Kouros, lead author on the study, told Science Daily. "They might be missing important emotional clues."

Now, obviously, if you don't notice your partner is in a bad mood for a few days, it's not the end of the world. But if you're consistently ignorant toward how they're feeling, Kouros warned that a problem could eventually start to develop.

"Failing to pick up on negative feelings one or two days is not a big deal," she explained to Science Daily. "But if this accumulates, then down the road it could become a problem for the relationship. It's these missed opportunities to be offering support or talking it out that can compound over time to negatively affect a relationship."

The reason this negative effect takes place is because your partner is supposed to be your go-to person for social support. When you're having a bad day, you expect your BAE to be there to make it better, usually more so than you expect your friends or family to. So even if your partner's bad mood has literally nothing to do with you, they may eventually start to feel as though you're not supporting them during their difficult time.

So how does the miscommunication happen? Kouros explained that we tend to assume our partners are feeling the same way we are. Needless to say, seeing as two humans aren't able to share the same brain, this is not always the case.

With empathic accuracy you're relying on clues from your partner to figure out their mood. Assumed similarity, on the other hand, is when you just assume your partner feels the same way you do. Sometimes you might be right, because the two of you actually do feel the same, but not because you were really in tune with your partner.

Now, one question remains: How do you improve your empathetic accuracy? Kouros suggested three simple tips for couples to put into practice.

First and foremost, try your best to give your partner your undivided attention. "I suggest couples put a little more effort into paying attention to their partner — be more mindful and in the moment when you are with your partner," she told Science Daily. It's time to hang up and hang out, people!

But on the other hand, she also said to avoid becoming too annoyingly pushy about figuring out what's on your partner's mind:

Obviously you could take it too far. If you sense that your partner's mood is a little different than usual, you can just simply ask how their day was, or maybe you don't even bring it up, you just say instead 'Let me pick up dinner tonight' or 'I'll put the kids to bed tonight.'

By doing something nice like picking up dinner for them, you're helping your partner to make their day easier without forcing them through the Spanish Inquisition.

Now, if you happen to be the partner who's in the bad mood, and you really do want to your partner's support, be sure to be clear about how you're feeling with your partner. "If there's something you want to talk about, then communicate that. It's a two-way street," Kouros said to Science Daily. "It's not just your partner's responsibility."

So, yes, it would be ideal if your partner was a mind reader. But the fact of the matter is that they're probably not. Be sure to communicate with them about how you're feeling instead of leaving them out in the dark.