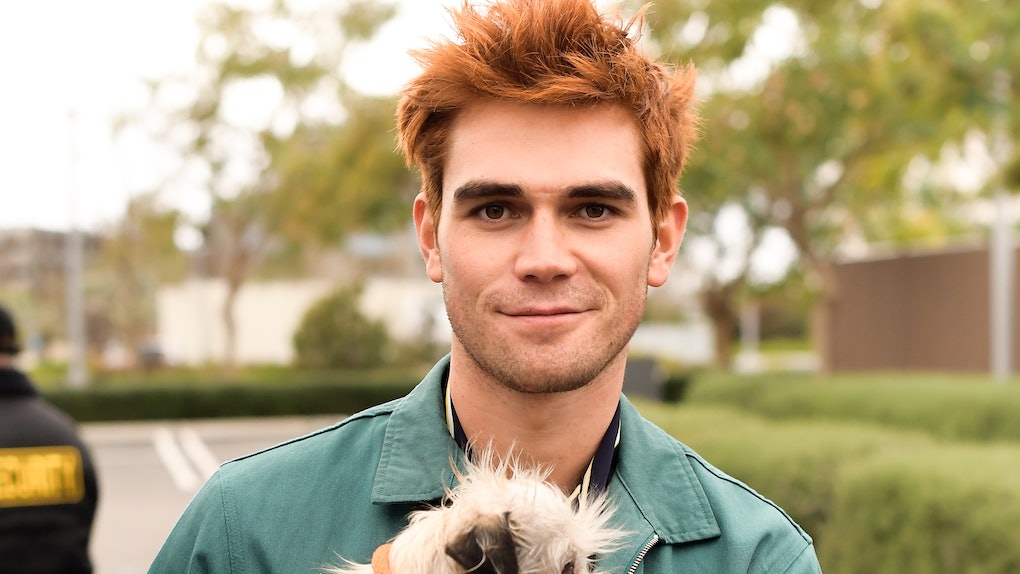 I’ve always had a bit of a thing for people with red hair, so when Riverdale premiered, I was all about KJ Apa’s character Archie. (Yes, I know, Apa is not a real redhead, but it suits him and that's enough for me!) Naturally, that makes me curious about what he's like as a partner. Little is known about his dating life, which means my best bet is to look to KJ Apa’s zodiac sign to see what I can surmise about what being in a relationship with him might actually be like. Spoiler alert: It would be hot.

Apa was born June 17, which makes him a Gemini. If you are familiar with this sign, you know that Geminis are naturally charming, complex, and thrilling to be around. Because they are so adaptable and eloquent, spending any small amount of time with one can make you feel like you've known them your whole life. They're so magnetic, you'll want to know them forever, if you know what I mean. Basically, knowing Apa's zodiac sign did nothing to cool my crush. Here's what else we can divine about what it would be like to be loved by Apa based, according to the stars.

He tends to fall in love hard and fast.

Geminis can be seriously intense. They are highly intelligent, curious, and thanks to their ruling planet Mercury, charming wordsmiths. When they're interested in someone, they have no trouble wooing them with their clever sense of humor and by being totally present and engaged. So, if a Gemini is falling for you, expect long, deep conversations that stretch late into the night about anything and everything. Geminis themselves fall quickly into infatuation, and when you're the object of their desire, they will do just about anything to sweep you off your feet.

He appreciates a partner who challenges him intellectually.

While falling in love comes easily for this sign, staying that way is a bit trickier. For Gemini to stay engaged, they need to be challenged intellectually, and emotionally stimulated. If not, they tend to blow into a relationship with gale force winds and slip away on a breeze. As a result, they seek out long-term partners who they can match wits with. Someone who makes them laugh and is up for anything at a moment's notice, but at the same time, has the confidence and independence to deal with this sign's sudden changes in mood. They are represented by the "Twins," after all, so being with a Gemini really is like loving two contradicting people.

He requires a lot of personal space.

People who need to spend all their time with the person they love should avoid dating a Gemini like Apa, because this is a fiercely independent sign that needs a lot of personal space. When a Gemini gives you their attention, they're all-in and can make you feel like you're the center of their world. However, when they need a break to recharge — which can happen at a moment's notice — be prepared for them to disengage and go into their own private world. If you happen to be someone who also requires alone time, then Gemini might just be your perfect match.

As someone who also values a bit of space and believes that some distance makes the heart grow fonder (not to mention those abs!), I think it’s safe to say my Apa crush is officially confirmed.