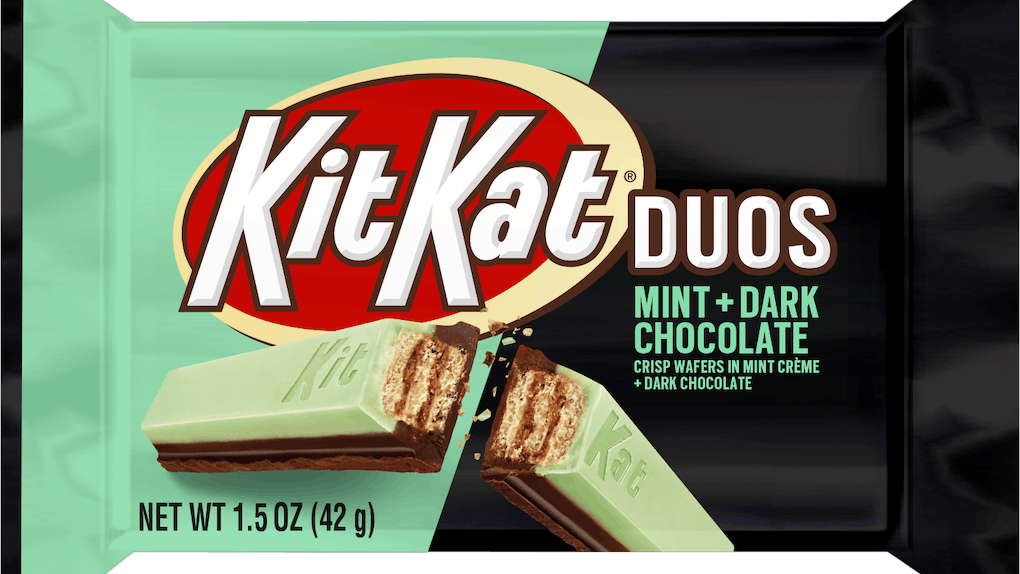 You might have heard some rumors about a new Kit Kat bar in the works, and I'm happy to inform you that it was all true. Get ready, chocolate lovers, because Kit Kat is finally announcing a game-changing addition to its candy lineup. On Wednesday, April 24, the candy retailer revealed that it's all happening: Kit Kat's Duos Mint & Dark Chocolate flavor is coming, so it's time to get hyped. According to press materials, this sweet new treat will be getting here around the holidays, which means you have just a few months to go until you can stock up on these minty fresh bad boys.

On April 24, Kit Kat announced that it was upping the ante on its chocolate wafer game by releasing what might be its most hyped creation from the past decade. Trust me, I don't say that lightly. Anyone who knows me knows that I consistently list the OG milk chocolate Kit Kats as my favorite candy (with the dark chocolate variety as a close second), and it takes a lot for me to even consider that another creation could take its throne. That is, until I heard about Kit Kat's Duos Mint & Dark Chocolate wafer, which combines the complementary flavors of refreshing mint and creamy dark chocolate in one bar. The best part? Their upcoming product is set to become the first permanent Kit Kat flavor in almost a decade, meaning you won't every have to worry about running out. Like, ever.

If the whole idea of a "duo" Kit Kat wafer confuses you, here's how it works. According to press materials, the bar's trademark light and crispy wafer will be encased by a layer of mint crème on the top and dark chocolate on the bottom. The rest? A heavenly combination of sweet and minty in each bite. Excuse me, I think it's about time for me to grab a snack.

Unfortunately, you'll have to put your plans of dipping these tasty treats in your summertime mint chocolate chip ice cream cones or biting into a few poolside on hold, as a Kit Kat rep revealed that they won't be available at retailers and grocery stores nationwide until the official launch in December 2019. I know, I know, it's a long wait. Still, the good news is that means that there's only just over seven months to go until you can purchase them stateside (plus, is it just me, or does mint dark chocolate go with pretty much everything during the holidays?). It'll be all the sweeter for the wait.

I know if feels like a long way from now, but this is a PSA that winter is coming in just a few months with all the tasty Kit Kat's Duos Mint & Dark Chocolates that your body can handle — and they won't be going anywhere when the seasons change. So, whether you're already dreaming of adding these specialty Kit Kats to spiked hot chocolate at your Christmas parties or you want to bring them out into rotation next patio season, you can rest easy knowing you have a tasty treat to look forward to.