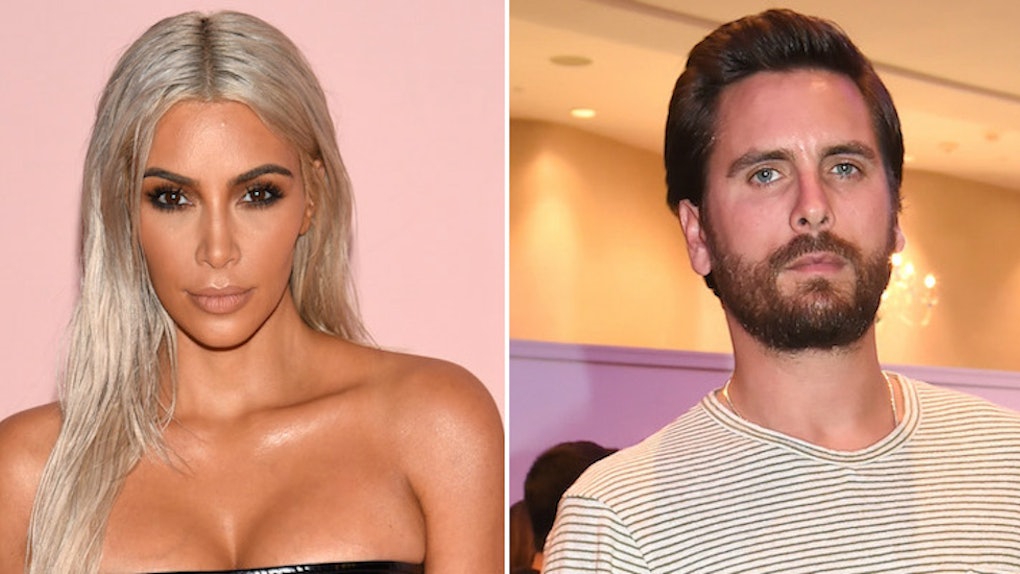 One thing I didn't expect to see in 2018 was Scott Disick and Sofia Richie's relationship continuing. But hey, here we are, two months into the new year, and they're still dating. Color me impressed. We already know how Kendall Jenner feels about their relationship (to say she's not into it would be an understatement), but Kim Kardashian hasn't spoken about it until now. Kim Kardashian's response to Scott Disick and Sofia Richie's relationship is definitely not what I expected from her. In a new episode of Keeping Up With The Kardashians on Sunday, Feb. 11, Disick was one of the main topics. He wanted to go to New York Fashion Week with Kris Jenner, and some of the family members were concerned he was just going to use it as an excuse to get away and party. But Disick has been working on his sobriety and told Jenner on their trip that he was genuinely enjoying waking up early and exploring the city every day.

At one point in the episode, Kris Jenner straight-up asked Disick if he was dating Sofia Richie. "Are you dating?" she asked. Disick responded, "Sure." Then she probed a little further and asked if he was dating just one person. When he said yes, she asked if it was Richie and Disick confirmed it was. Then she asked what most of us asked when they first started dating: "Wait, so how old is she? Because I really don't know. Is she Kylie's age? Twenty?" Kim Kardashian gave her take on Disick's love life in a solo shot in the episode. She said,

I've just started to see pictures of Scott running around New York [with Sofia] and whatever makes him happy. I don't judge. I don't care. I think it's a good thing. I just hope that he's making good choices and having fun and nothing's getting crazy.

That's a... surprisingly chill reaction from Kardashian, who has had famously not chill reactions to Scott Disick's behavior in the past. Jenner and Disick (who's 34) talked about the age difference between him and Richie. Jenner noted that she was 12 years younger than Robert Kardashian when she started dating him. "So I was 17," she said, "and Robert was, well 12 years older." Disick responded, "You were underage, and she's not." Jenner apparently didn't have much to argue with that, so she said, "Oh, touché!" back. So it looks like Kris Jenner and Kim Kardashian (and possibly Khloé Kardashian) are the only ones who are cool with Disick's dating such a younger woman. Richie used to be good friends with the family, as well, so that makes things even more awkward and explains why Kendall Jenner shades her and Disick so much.

On Feb. 6, Kendall Jenner commented on a fan's Instagram of Disick and Richie throwing a sh*t ton of shade at them.

The photo showed Disick and Richie sitting in a car together with one of Disick's kids sitting in the back seat. The caption read, "It's good to see them together." Jenner commented on the photo and said "awww Scott and his kids." YIKES. Guess we know how Jenner feels about it all.

Another plot point of the episode was Kim Kardashian and Kanye West's surrogate.

Kardashian was pissed that information about her surrogate was apparently being leaked to people, and some of the information was stuff Kardashian apparently didn't even know herself. "I honestly am absolutely fuming that there are all these articles coming out about our surrogate," she said. She added, "People started to write me asking if it was true and i just said we don't want to talk about it right now."

In a solo shot, she said she and West would talk about her surrogate when they're ready to. "We'll share it in our own time when we're ready to share it," she said. It's not clear if this means they will one day reveal the identity of their surrogate or if this is how she felt about revealing the surrogacy news before it was announced. But Kardashian did say in the episode that she wanted to protect her surrogate's privacy because she knows she signed up for public life, but her surrogate didn't. And suddenly becoming famous when you don't want to be is bound to be stressful as hell for a pregnant woman. Based on all this, I doubt Kardashian will ever tell us who her surrogate was, but hey, at least she told us her opinions about Disick and Richie...?