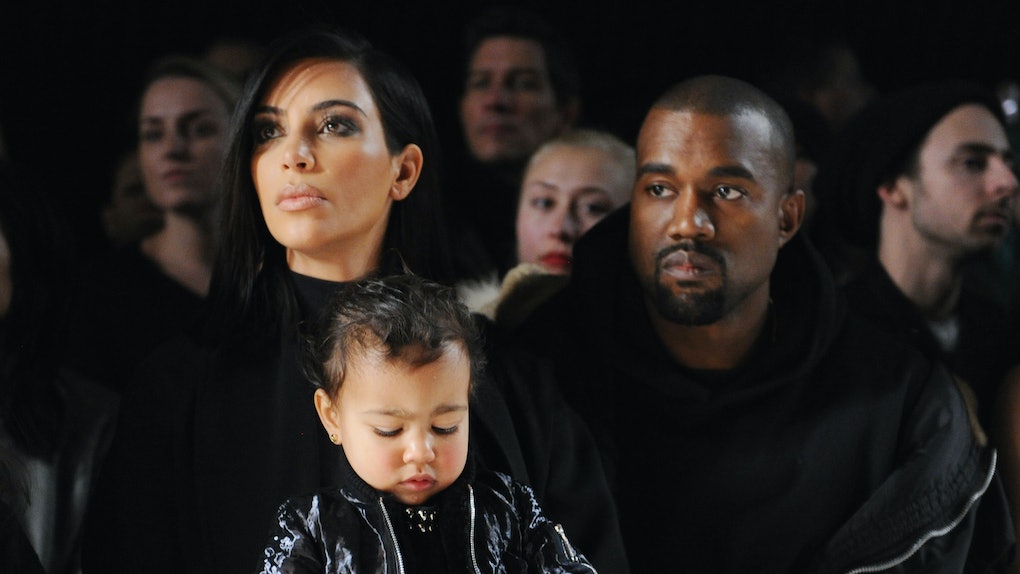 The Kardashians have had their fair share of well-posed family photos, but there are times when things just don't go as expected. Take Kim Kardashian's photo with Kanye West and their kids, for example. While the mom-of-three looked picture-perfect (I mean, when doesn't she?), her little ones had some trouble pulling things together. OK, maybe a lot of trouble — but it kind of makes the photo even more adorable.

If you're a parent (or even if you're not) and have ever tried to take a photo with a kid, you know that sometimes getting a good one where everyone is looking at the camera can be next to impossible. And when that happens, you have to roll with whatever you can get. That appears to be what happened to Kardashian on March 30. On Saturday morning, the beauty mogul shared an Instagram pic of herself, her hubby, and their children lying in bed together, but Chicago and Saint West appear to be focused on everything but the camera. While Chicago appears to be fixated on a diamond-encrusted chain around her father's neck, Saint is shown pulling on his mom while giving his big sis North a funny look. Despite the apparent chaos, the famous parents manage to keep calm facial expressions as if nothing is going on, and if that isn't on brand for all the parents out there, IDK what is.

Don't get me wrong — the photo, simply captioned, "Morning," will definitely still make you say "Awww!" But you can't ignore everything that's going on, either:

Be honest: Kanye's face says it all, doesn't it?

Their photoshoots are probably going to be even harder to pull off once baby No. 4 arrives. While the due date is unclear, reports have said that the baby is due in early May. Elite Daily previously reached out to representatives for Kardashian for comment on or confirmation of the reports, but did not hear back. There seems to be some truth to those reports, though, as Us Weekly reported on March 29 that the reality star and her fashion designer hubby have been preparing for their child's arrival. “Kim and Kanye have begun work on the nursery,” an insider told the publication.

Apparently, the little one can't get here any sooner. The insider went on to say that the entire fam is eager to meet their new family member. “Kim is in a great place,” the source said, adding, “North fully understands what’s going on and is so into it.”

The only thing left to do, the report says, is to come up with a name for the baby, which has apparently been really difficult for Kardashian and West. “Kim and Kanye are not close to naming the new baby,” the insider added. “They won’t know until the week before and probably only day of. It’s quite the process.” Elite Daily reached out to Kardashian's and West's reps for comment on the reported baby preparations, but have not heard back at the time of publication.

I'm sure the best things to do in those stressful times is to have a chill day in bed with your hunny and your other kids. Sure, the family photoshoot might not have worked out perfectly, but this will probably make for a really cute memory when the Wests look back at this moment. Don't you think?