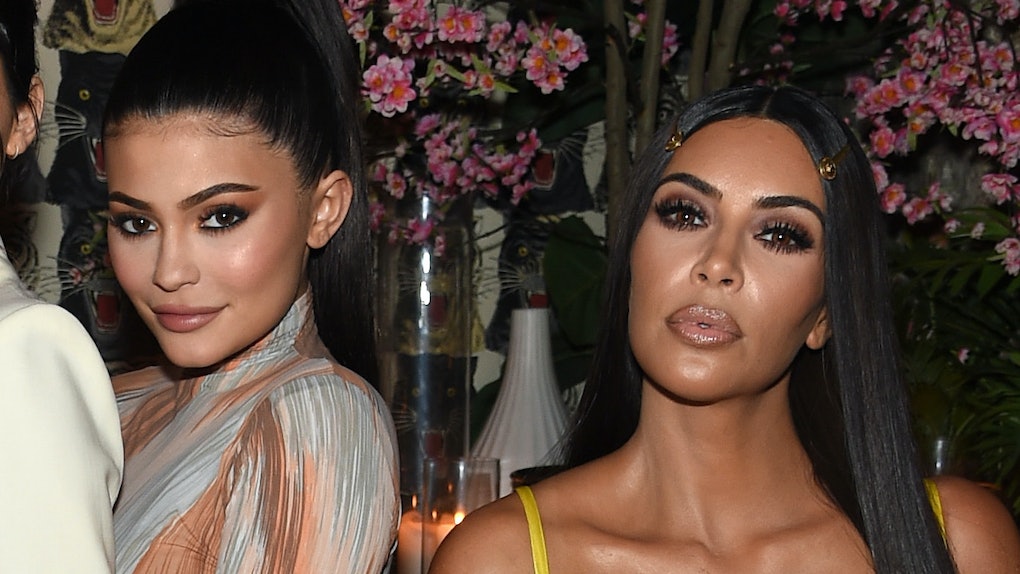 Another day, another photoshop fail claim against the Kardashian-Jenner clan on social media. Today's musing is brought to you by Kim Kardashian's Instagram with Kylie Jenner. The sisters are promoting their new perfume collaboration for Kim Kardashian West Fragrance.

So, here's what happened: The KarJenner sisters have been posting photos of themselves holding lip-shaped perfume bottles and wearing the most peculiar onesies I've ever seen. On Aug. 19, Kardashian posted what looked like a pretty straight-forward promotion of herself and her little sis strutting their stuff in mid-power stride on the 'Gram. In the caption, Kardashian shared that Jenner has always loved her perfumes and was absolutely stoked to be part of the new collection.

"Kylie’s favorite is the nude bottle, I think mine is the pink!" she wrote. "She’s been wearing my perfumes forever so this collab is extra special because I know how much she loves the process. Finding her perfect scent was impossible so we narrowed it down to her three favorites! Kkwfragrance.com Aug 23rd." Awww, the sister support is seriously cute.

While some fans gushed over the sweet sibling bond, others were in the comments section calling out a possible photoshop fail. Can you spot the knot? I couldn't until coming across this comment. "I’ve counted so many times to make sure I’m not being stupid but Kim defo has 6 toes!" wrote one fan, igniting a huge thread on the matter.

"No idea lol but it caught my eye and then I couldn't un see it," responded another fan. "I double checked..... definitely 6," co-signed another. Honestly, it does look like Kardashian has six-toes. However, for folks who have a protruding bone under their pinky toe, they also know that at the right angle, they too could look like they seemingly have a sixth phalange. That could be what's happening here. A few fans seem to agree with my theory.

"After further investigation, this 6 toed post is an illusion. As well as other posts. go further back you can see her wide feet can sometimes creat [sic] that illusion," wrote one fan. "No, she just has a wide foot and her toe goes in lot of people do," answered back another.

On Aug. 12, yet another one of Kardashian and Jenner's KKW Fragrance promos were called out for a possible photoshop mishap. In the photo, both sisters are on the floor and in front of what looks to be a gigantic lip-shaped fragrance bottle. Cute.

The post is captioned, "I’m so excited for my first ever @kkwfragrance collab with @kyliejenner!!! The collection features three lip-shaped bottles in red, pink, and nude for $40 each."

While I zoned in on the incredibly affordable price, a few fans spotted what they figured was a photoshop fail. Can you spot it? Here's a hint. Look at Kardashian's hand. Fans seem to think her thumb looks a little too long.

“Why is her thumb the same size as the rest of her fingers?" asked a fan. I'm not really sure, but Kardashian could actually have long thumbs. Is that a crime? There's also the fact her hand is positioned at an angle. Pair that with special lighting and it could all be an illusion. The world may never know. Regardless, IDK if it's that serious. There's new affordable perfume on the way people. Get excited.