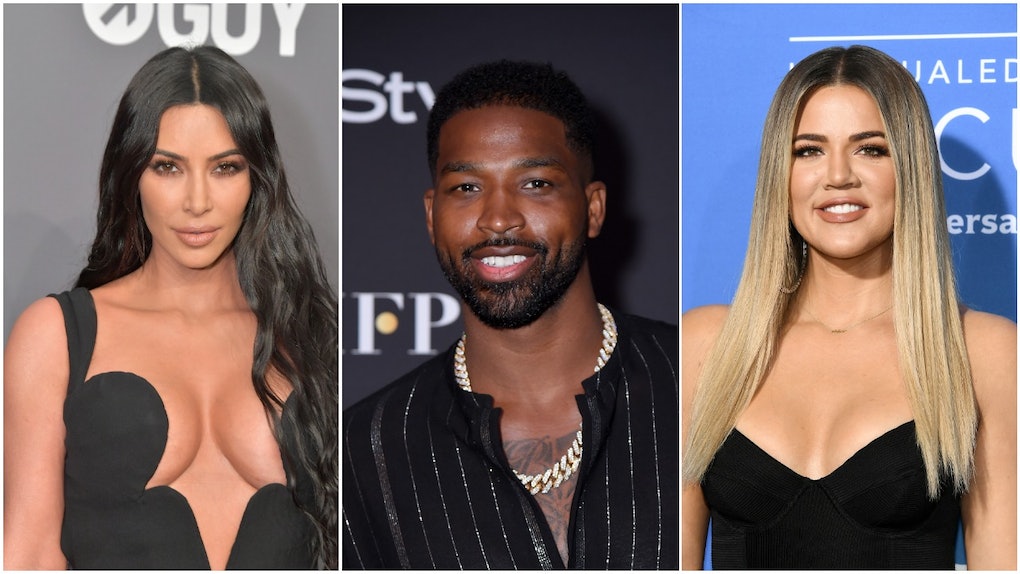 Are we in an episode of Black Mirror y'all? Seriously, because Kim Kardashian reportedly had dinner with Tristan Thompson (y'know Khloé Kardashian's ex) and I have all the questions. The first one being "Why?" Like, what could ever prompt this sort of meeting and in a public setting?! My mind is wrecked right now, but I'm going to try and keep it together so I can give y'all the deets.

On Sept. 11, Kardashian was spotted at dinner with Thompson at Estiatorio Milos in New York City. According to a source at TMZ, the two met up and exchanged a cordial hug before sitting down to chat. Interesting. So, it sounds like they didn't just happen to run into each other at one of the thousands of restaurants in the Big Apple. Elite Daily reached out to Kardashian and Thompson's reps for comment, but did not hear back by the time of publication.

Now, I'd like to think Kim and Thompson were having a serious discussion about Khloé and their daughter True, or even burying the hatchet since his split with KoKo after the Jordyn Woods cheating scandal hit the press in February 2019. However, I don't think that's the case since they weren't alone.

According to Us Weekly, Kim and Thompson dined with Kim's BFF's Jonathan Cheban, LaLa Anthony, and Simon Huck. Hmm... could this mean the previous drama between Thompson and the Kardashian-Jenner family has been squashed and he is now on good dinner-and-party terms with them? I don't know about you, but I'm even more confused since Kim has always looked out for Khloé and True's best interests. So, why would this be any different?

To make things even more baffling, it turns out the Keeping Up With The Kardashians film crew was on-site to catch all the action. "Cameras were filming the dinner!" an eyewitness said to RadarOnline. "Tristan showed up about halfway through the dinner. He joined the table and stayed until they were all done." *Insert shocked emoji here* Elite Daily reached out to Kardashian and Thompson's teams for comment on the report, but did not hear back by the time of publication.

“He was laughing and joking with everyone and it wasn’t awkward looking at all. Khloé wasn’t there, but the cameras filmed it. Tristan and Kim talked all night, and he joked around with Jonathan,” the eyewitness said before noting, “everyone looked like they were having fun.”

Wait, so do you think they were putting on their best smiles for the show? Does Khloé even know what's going on? Maybe Thompson is just trying really, really hard to get back in the family's good graces? It's not like he hasn't tried to woo KoKo back before.

During the premiere episode of season 17 of Keeping Up With The Kardashians, KoKo revealed Thompson tried to kiss her just two months after all of the Jordyn Woods drama went down. So, I wouldn't be surprised if it turns out he is slowly trying to win back the Kardashian-Jenner family's trust before pursuing Khloé herself.

But honestly y'all, there are just so many unanswered questions at this point and I'm just hoping I don't have to wait all the way until season 18 of Keeping Up With The Kardashians to get some answers.