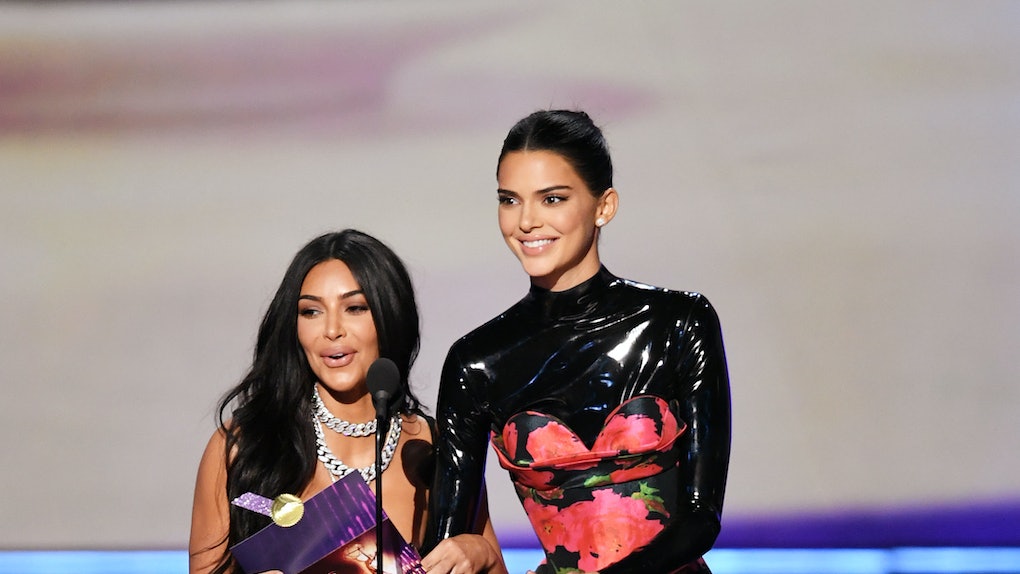 Kim Kardashian & Kendall Jenner Were Laughed At During The Emmys & OMG

The Emmys were a night full of laughs and celebration, but one moment was super awkward to watch. Although they were not nominated, Kim Kardashian and Kendall Jenner took to the stage midway through the awards ceremony to present an Emmy, but as Kim began her speech, the audience started laughing. Yep — Kim Kardashian and Kendall Jenner were laughed at during the Emmys, and it was super cringeworthy to watch it happen.

About halfway through the 2019 Emmy Awards, Kim Kardashian and Kendall Jenner strutted onto the stage to announce the Outstanding Competition Program category. Unfortunately, the presentation hit a few hitches. Kim had a tiny trip while walking onto the stage alongside her sister. And then when Kim began to read her introductory speech about the category, the audience broke into laughter... even though Kim was not telling a joke.

Kim began by telling the crowd: "Our family knows firsthand how truly compelling television comes from real people just being themselves..." The statement was just meant to be a factual statement, it seemed, but the Emmys audience took it as a joke and began to laugh. Kendall continued the speech, finishing Kim's thought by adding: "Telling their stories, unfiltered and unscripted." The laughter only lasted for a bit, but it seemed like the crowd assumed that Kim and Kendall were making a self-deprecating joke about Keeping Up with the Kardashians when they were not trying to.

Viewers on Twitter captured and reacted to the awkward moment:

Thankfully, it did not seem like the brief bit of laughter fazed Kim Kardashian or Kendall Jenner all too much during their big moment, and the sisters got through their presentation quickly and handed the Outstanding Competition Series trophy to RuPaul Charles for his winning series RuPaul's Drag Race.

Since Kim and Kendall were not nominated for any of the awards on Emmys night this year, the Kardashian-Jenner sisters were free to just chill and watch the rest of the awards ceremony after their brief time on stage as presenters.

In a red carpet interview with E! before the Emmys began, Kim spoke about how Keeping Up with the Kardashians premiered before the Emmys even had a reality television category, and she also spoke a bit about her unexpected new life on a ranch in Wyoming with her husband Kanye West. Kim said that she was trying to attend one of Kanye's Sunday service performances out in Wyoming prior to the Emmys, but could not get the scheduling to work out.

And Sunday was not only a big night for Kim and Kendall because of their Emmys appearance. While the Emmys were airing on Fox, E! was premiering a brand-new episode of Keeping Up With the Kardashians. The long-running reality just premiered its 17th season earlier this month, and on Sunday, Sept. 22, the third episode of the new season aired while Kim and Kendall were on the Emmys stage. The reality star sisters may have had to field a few awkward laughs, but hey — at least they can say they got onto the Emmys stage!

More like this
Kim Kardashian & Nicola Coughlan's 'Bridgerton' Twitter Convo Is Peak Fangirl
By Dylan Kickham
These Tweets About Beyoncé On Netflix's 'Selena: The Series' Are Too Much
By Dylan Kickham
Jamie Lynn Spears' Promotion For 'Sweet Magnolias' Season 2 Means More Noreen
By Dylan Kickham
Stay up to date