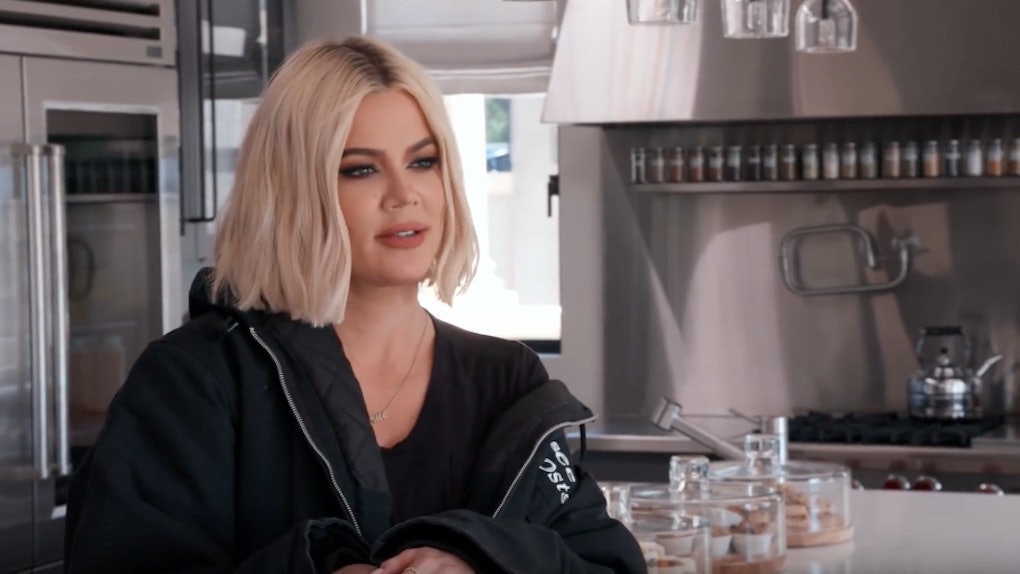 YouTube/Keeping Up With The Kardashians

Did you happen to catch the Sept. 8, season 17 premiere of Keeping Up With The Kardashians? It was excellent, y'all! I mean, there was so much drama. See, Khloé Kardashian was struggling with whether to invite her ex Tristan Thompson to their daughter True's first birthday party in the wake of the whole Jordyn Woods cheating scandal, and mama was on edge. She ended up inviting her former flame, who apparently tried to make a move on her the night before the party. You heard me. But Khloé Kardashian's reaction to Tristan Thompson trying to kiss her was totally on point, you guys, so, well done, sis!

But let's back up for a sec. At the beginning of the episode, Khloé gave her fans a status update via confessional. "So, how am I? I am great," she began with a laugh. "No, I'm not. What am I? I'm really just trying to figure out my own life at the moment. I have so many raw emotions towards Tristan, and I'm just healing and processing and going through the motions, I guess."

Aw, we're rooting for you, Khlo! She later revealed to her mom, Kris Jenner, that Thompson had been trying hella hard to slide back into her DMs.

"Tristan thinks people are disposable; if he sends me enough flowers or enough text messages, I’m going to come around," Khloé said. "I don't even know if I want him at True's birthday party. I might say, 'You know what? It's too soon. And you don't deserve to be there.'"

Khloé was understandably wrestling with the decision, especially considering that, at the time, she hadn't spoken to Thompson in person since the scandal first broke. But Mama Kris eventually convinced KoKo to let Thompson attend the bash.

"It's her dad," she told Khloé. "Just listen to me. Nobody wants to be left out of the memories that are made."

Fair point. But Khloé didn't want the party to be the first time she met with her ex face-to-face, so she agreed to let him come see True the night before. She later recounted the meeting — which took place off-camera — to her assistant.

This is how she described the encounter:

I brought True to the door to answer it, and she was so excited. It was really cute. And then, literally, he was just kind of lingering. He was like, 'So, do you want to grab a glass of wine?' And then he was like, 'Can I have a hug?' And I, like, one-arm hugged him. And then he tried, to like, kiss me. And I go, 'This is the problem with you. You can't just take what you get.'"

You just said a mouthful there, KoKo!

Meanwhile, the episode ended with Khloé running out in tears in the middle of the party, after Tristan decided to confront Kanye West about the sisters using the intro to West’s song "Runaway" in a KUWTK teaser about the cheating scandal.

"I don’t need at my daughter’s birthday party for any of this to be a discussion," Khloé said before stalking off.

I can't believe we have to wait a week to see how this whole thing plays out.