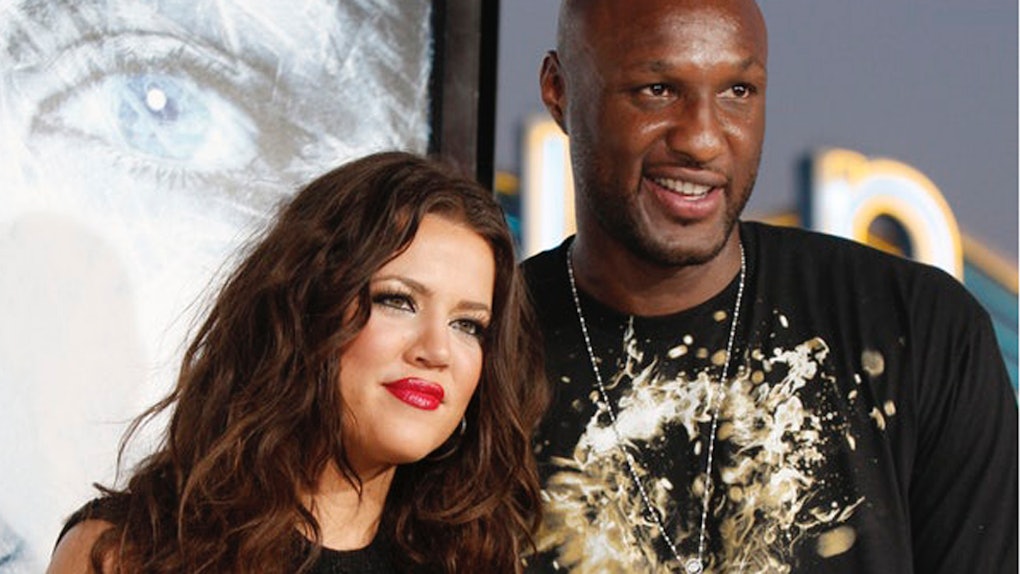 While it's been years since Khloe Kardashian and Lamar Odom went their separate ways in 2013 (their divorce was finalized in 2015), I still feel a little bit sad about what could have been between these two. They seemed beyond in love before things went south, which made their breakup and divorce so heartbreaking to see. Because if Khloe Kardashian and Lamar Odom's astrological compatibility is to be believed, when things were good, they were amazing.

You see, Kardashian was born June 27, under the sign of Cancer, and Odom’s birthday is Nov. 6, making him a Scorpio. These signs are two of the most compatible in the entire zodiac. They are both emotionally deep water signs, with a true desire for a strong, secure, and lasting connection. So, if any couple should be able to make it, it's a Scorpio and Cancer romance. However, what makes this couple so compatible can actually prove to be a double-edged sword, because these highly emotional water signs can find it difficult to calmly work through issues. In the case of Kardashian and Odom, knowing their history — and, as People reported, the role that Odom’s infidelity played — it seems the breakup was the best thing for this couple.

As I mentioned previously, both Scorpio and Cancer are water signs, which means they have deep connections to their emotions. They are both signs that try to hide behind their tough outer shells, but once you get past that line of defense, you’ll discover a soft and vulnerable heart — one that has likely been hurt before, because both signs are very sensitive. When they meet, it feels like they've discovered a true kindred spirit and soulmate, so things can move quickly between them.

Trust is the ultimate vulnerability for these signs.

Oftentimes, when these signs find one another, they click and the rest of the world kind of falls away. But what happens when you're one of the most famous couples in the world? According to Odom, fame was the downfall of their relationship when mixed with his own personal issues. Odom shared some excerpts from his new memoir, Darkness to Light, with People, and in it he talked about what went wrong in his marriage.

“I could not handle the lethal cocktail of the spotlight, addiction, a diminishing career and infidelity,” he writes. “Oh, did I mention the paranoia, anxiety, depression. … I couldn’t keep my d*ck in my pants or the coke out of my nose. Drug addicts are incredibly skilled at hiding their habit. I’d get defensive and Khloé would just drop it.” However, it was just a matter of time before Kardashian would learn of the infidelity and end the relationship. This makes perfect sense when you consider the way both Cancer and Scorpio approach trust in a relationship. Once the trust is lost, both signs go cold. There’s rarely any coming back from cheating for a Scorpio and Cancer pairing.

Once the trust is broken, the connection can become very toxic.

Once the bond of trust is broken between a Scorpio and Cancer, things can quickly get toxic. That's because Scorpio can be very jealous, and when they feel threatened, this Pluto-ruled sign can become aggressive and obsessive. Cancer, for their part, can't let go of the emotional wound, and so they tend to close off their hearts. It creates a feedback loop of jealousy and coldness that has real potential to get ugly.

While it was definitely disappointing to see these two split back in 2013, sometimes breaking up is the best case scenario — and it's clear for these two that going their separate ways was the right choice.