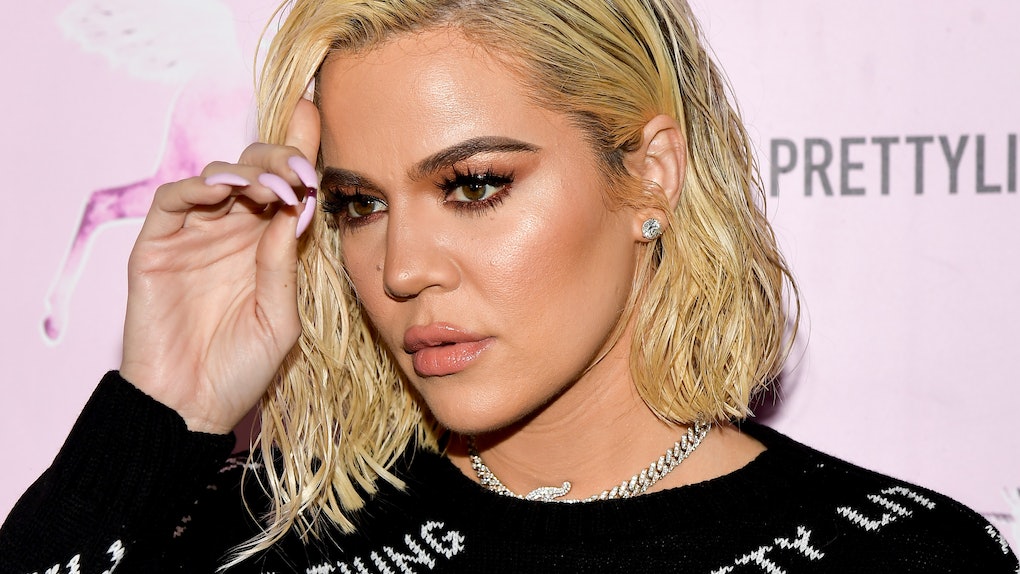 Proving once again that you can't keep a good Kardashian down, Khloe has emerged from the ashes of her relationship with Tristan Thompson like a phoenix… in a rhinestone bodysuit. Yep, we are officially done with the “why” phase of the breakup, have moved on to the “Khloe Kardashian is reportedly moving on from Tristan Thompson for good” phase — and I am so here for it. Elite Daily reached out to Kardashian’s team for comment on the report, but did not hear back by the time of publication.

The former couple officially announced they were going their separate ways in February after eyewitnesses reported to TMZ that Thompson and Kylie Jenner’s (now former) bestie were spotted “all over each other ... making out." While this wasn’t the first time that Thompson stepped out on Kardashian — Thompson was busted back in April 2018 getting cozy with two women in a hookah bar, while Kardashian was in the final weeks of her pregnancy with their daughter True — this time it truly is different. Why? Because reportedly, Kardashian is "Angry more than she is sad," an insider told E! News. Good for her, she has every right to be angry and it seems like she is channeling that anger into moving on. “We have to accept that some people are really f*cked up and it's not our job to heal them," she wrote on an Instagram story. "The most beautiful people we have known are those who have known defeat, known suffering, known struggle, known loss and have found their way out of the depths. These people have an appreciation, a sensitivity and an understanding of life that fills them with compassion, gentleness and a deep loving concern. Beautiful people do not just happen."

Also different this time was the involvement of Woods, who Kardashian was close to, doubling the sense of betrayal. "This has been an awful week & I know everyone is sick of hearing about it all (as am I)," she tweeted on March 2. "I'm a rollercoaster of emotions & have said things I shouldn't have. Honestly, Tristan cheating on me & humiliating me, wasn't such a shock as the first time. What's been harder & more painful is being hurt by someone so close to me," she continued. "Someone whom I love & treat like a little sister. But Jordyn is not to be blamed for the breakup of my family. This was Tristan's fault. I have to move on with my life & count my blessings, my family, my health, & my beautiful baby True."

It’s still not entirely clear if Kardashian and Thompson were still together when the alleged cheating with Woods occurred, but either way, Kardashian is completely done with the relationship this time. “She gave Tristan everything she had and she isn't going to do this to herself anymore. She knows she deserves better," an insider told E! News. "She has never trusted him again and it's been an awful way to live. She is done.

While their relationship may be over, it’s important to Kardashian that their troubles won’t affect Thompson's relationship with their daughter, True. The couple will reportedly continue to coparent her. "The situation with Tristan is a lot more complicated because of True," a friend told E! News. "She will always put True first and will never allow her feelings to taint True's relationship with Tristan. True will never be punished for Tristan's behavior."

As for what's next for the newly single Kardashian? Well, for one thing, she isn’t rushing to get back out there and start looking for her next boo. “Khloe isn't thinking about dating again," the friend told E! News. "She's entirely focused on True and being the best mom she can be."

It also doesn’t hurt that she has just about the best support system in the world to help get her through this. So, in the meantime, we can count on Khloe to surround herself with her ultimate girl squad, her sisters — oh, and lots and lots of photo shoots showing off that revenge body.