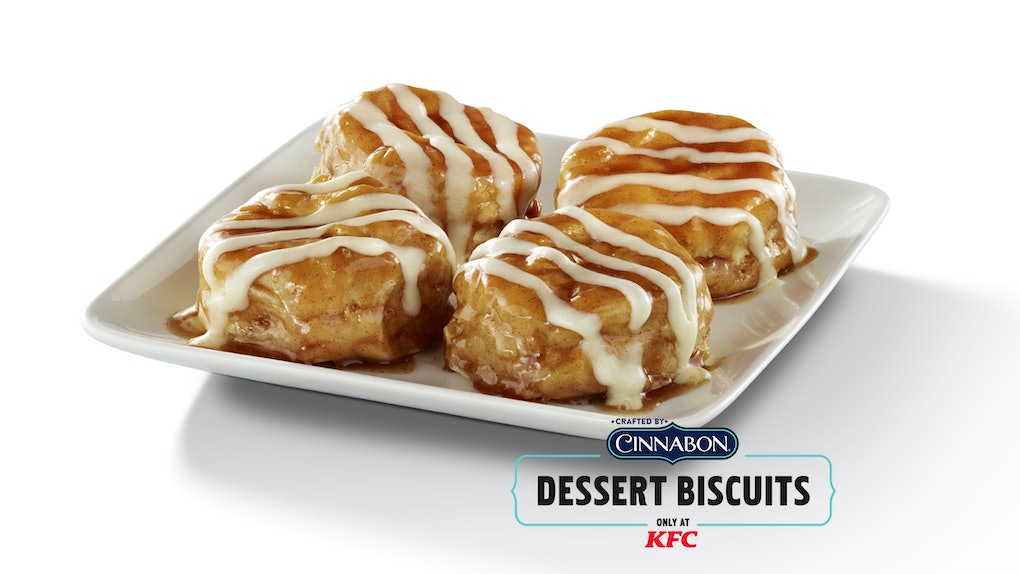 Maybe I'm making assumptions here, but over the course of your life, you have most likely come to know and love KFC for its creamy mashed potatoes, crispy-as-heck fried chicken, and most importantly, the flaky, buttery biscuits. That being said, the restaurant chain is releasing a new tantalizing treat that combines its renowned biscuits with one of your all-time favorite desserts. I, personally, have not yet had the chance to try KFC's new Cinnabon Dessert Biscuits, but you'd best believe they're at the top of my to-eat list right now. In all seriousness, I am dying to try them.

While the chain is famous for its fried chicken just added a new limited time dessert offering to its menu, according to a press release, and it combines staple dishes from two of your favorite restaurants: KFC and Cinnabon. On Thursday, April 25, the fast food restaurant officially unveiled its brand new Cinnabon Dessert Biscuits. Sounds like the ultimate combo, right? It starts with a base of the chain's classic buttery biscuits. They're delicately drizzled in a sweet cinnamon brown sugar glaze, and topped off with signature Cinnabon cream cheese frosting. It's the hot new food hybrid combining savory biscuits and sweet Cinnabons — and it pretty much goes without saying that I could go for an order of these babies STAT.

Wow, all I can say is those look super moist and overall delicious.

If you're planning to order KFC's Cinnabon Dessert Biscuits in the next few weeks, you can buy one for $1 or four for $3, according to a press release. And if you are thinking about ordering a 10-piece meal from the fried chicken chain, you will automatically get four Cinnabon Dessert Biscuits for free. Keep in mind you will only be able to get your hands on these between April 29 to June 30 (or while supplies last!), so definitely lock down an order of these as soon as you possibly can.

In the press release, KFC's Chief Marketing Officer, Andrea Zahumensky, expressed her excitement surrounding the fact the chain is introducing these just in time for Mother's Day on May 12.

In the press release, Zahumensky said, “Our new Cinnabon Dessert Biscuits were created just in time for Mother’s Day to give mom a delectable sweet treat that’s uniquely KFC."

If you are looking for more cinnamon-y goodness, you will be happy to know Cinnabon reintroduced its famous Churro Swirls as a permanent menu item in March 2019. An order of Churro Swirls will cost you $2.49, and if you want to add a second Churro Swirl to your order, it will cost you an additional $0.99. You also have the option of adding on a warm Ghirardelli Chocolate dipping sauce or a Smooth Caramel dipping sauce for an extra $0.50, and personally, I would go for both. You only live once, you know?

Whether you're sharing them with mom or if you're planning on eating four by yourself, KFC's Cinnabon Biscuits probably aren't something you should miss. They're the cinnamon sugary snack I want, and quite honestly need.