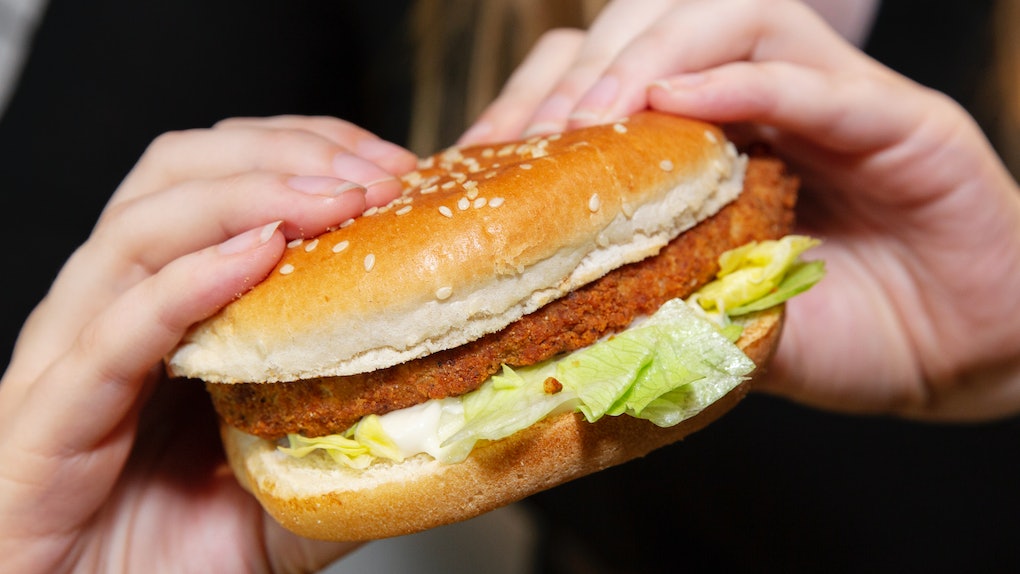 KFC's Impossible Burger Will Have Even Devoted Carnivores Drooling

Just weeks after Burger King debuted a meatless Whopper, another fast food chain is jumping on board the vegan patty wagon. If you've ever wanted to bite into a crunchy fried chicken burger sans meat, you'll want to ready yourself for KFC's Impossible Burger, which is currently available in the U.K. with plans to expand across the pond soon, according to reports. Aptly titled the Imposter Burger, this new addition looks just like the chain's Original Recipe Fillet Burger — and it will have even devoted carnivores lining up to try one.

If you've been following along, you might have heard rumors circulating back in May that the global fast food chain was planning to work with suppliers of alternative proteins to figure out a plant-based alternative to fried chicken that would taste as good as the real thing while being a little better for the environment. Now, KFC is announcing that as of Monday, June 17, customers in the U.K. will have four weeks to sample their new Imposter Burger, according to The Independent.

Per the publication, KFC UK & Ireland’s Head of Food Innovation Victoria Robinson reportedly said that the company decided to dream up a meat-free alternative because it was "unfair" that non-meat eaters were being "denied the incredible taste of KFC up to now" — which I think is something that most vegetarians would probably agree with.

Luckily, the days of ordering french fries while your carnivore friends dig into their sandwiches are at least temporarily behind you, thanks to the limited-edition launch of a vegan update on the chain's Original Recipe Fillet Burger. This is arguably one of the chain's most classic offerings, so I applaud KFC for starting with this item.

According to press materials sent to Bustle, you can expect a tasting experience similar to one of their real fried chicken sandwiches with all the OG spices and bun and a vegan version of KFC's batter. There's even vegan mayo, so you can feel extra good about ordering one of these bad boys:

I don't know about you, but this sounds completely mouthwatering to me, and it's just an added bonus that this tasty addition will reportedly only cost you £3.79, according to Bustle.

Unfortunately, the Imposter Burger is only available for a limited-time for customers who live in London, Bristol, and the Midlands, but PETA teased in a tweet that U.S. residents could also be seeing the meat-free option sometime soon.

KFC is just the latest fast food chain to jump on the meat-free trend in light of pressure from customers who want more animal cruelty-free and environmentally-friendly options to choose from. Considering that Quorn is made up of Mycoprotein, which reportedly uses 70% fewer resources to produce than chicken, according to its website, I wouldn't be surprised if more people get on board with being finger lickin' vegan with KFC's newest offering.