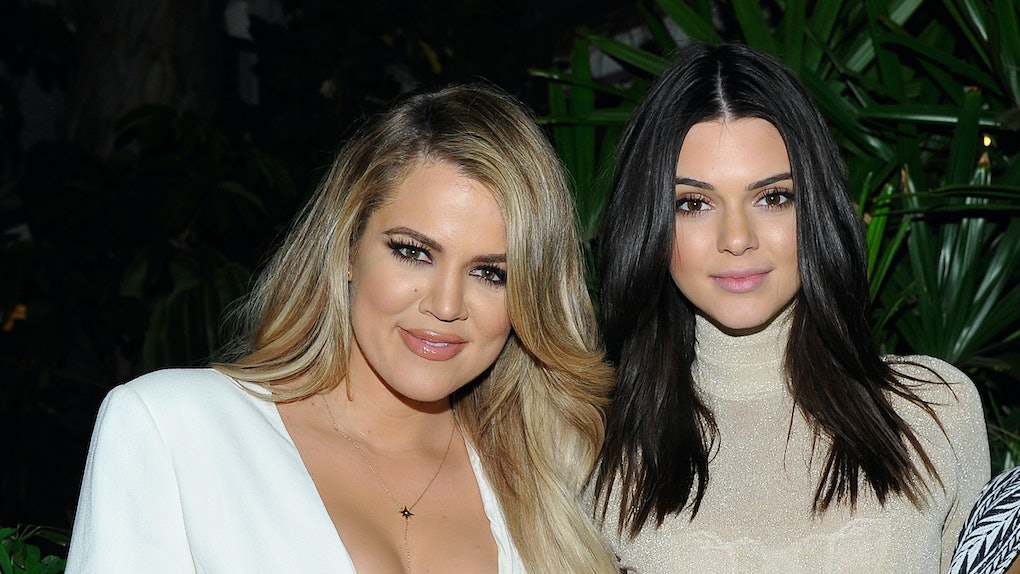 Kendall Jenner's got a new 'do and I think it came with a new attitude to match, y'all. She's blonder and bolder than ever before. You see, Jenner's sporting platinum-dyed hair these days, much like her older sis Khloé Kardashian, who has openly said they look so much more alike now. Well, Kendall Jenner's response to Khloé Kardashian saying they look like twins was not what you'd expect. Or maybe it is what you'd expect from sisters? Let me give you the rundown.

On Sept. 16, Jenner sent her fans into a frenzy after stepping out in Burberry's Spring 2020 show during London Fashion Week with a new look. She was sporting blond locks with brown roots down the runway. Jenner, who seemed into her new hair color, took to the 'Gram to share the stunning new look with her followers. She posted a few pictures on her Instagram story and the last look, aka final walk of the Burberry show.

Wow, she looks so different. TBH, Jenner could be fooling us all and wearing a really good lace-front wig. Or, maybe she took the plunge and went platinum blonde. Either way, she looks good. Her sister, Khloé Kardashian seems to think so, too. Maybe not so much after things took a hilariously awko-taco turn online.

On Twitter, a fan asked KoKo what she thought of her little sister's matching blonde hair. "Out of topic but can we talk about this: HOW GORGEOUS KENNY LOOKS WITH BLOND HAIR? omg i can’t!!!! #TwistedSisters," the fan wrote.

Kardashian had nothing, but love for her sister, singing praises to the new blonde. In fact, KoKo said she looked good. Like, so good, she looked exactly like her big sis!

"She’s so perfect either way!!!!!! I mean now she looks exactly like me #TwistedSisters," she tweeted back to the fan. True, Kardashian and Jenner look a bit more alike. However, Jenner wasn't here for it and threw a rather shady comment back at her sis.

Whoa, this is like one of those awkward moments when you are at a friend's house and they get into it with their sibling and you just stare into space silently hoping to disappear while stifling any giggles you may have. Only this cringey exchange is online, so many fans did the same, but with gifs.

The same fan who asked Kardashian about Jenner's hair, also followed up with Jenner on how she is feeling about her new color. "This was your first big change so far, how do you feel about being blond now?" they wrote.

"So scary! but fun for a little :) gotta take yourself out of your comfort zone sometimes," Jenner wrote back. True dat. Changing your hair color or cut is a big deal. But, Jenner rocks it well.

I'm going to assume Jenner was just having some harmless fun with her shady comment, as sisters do. They don't call them the #twistedsisters for nothing!