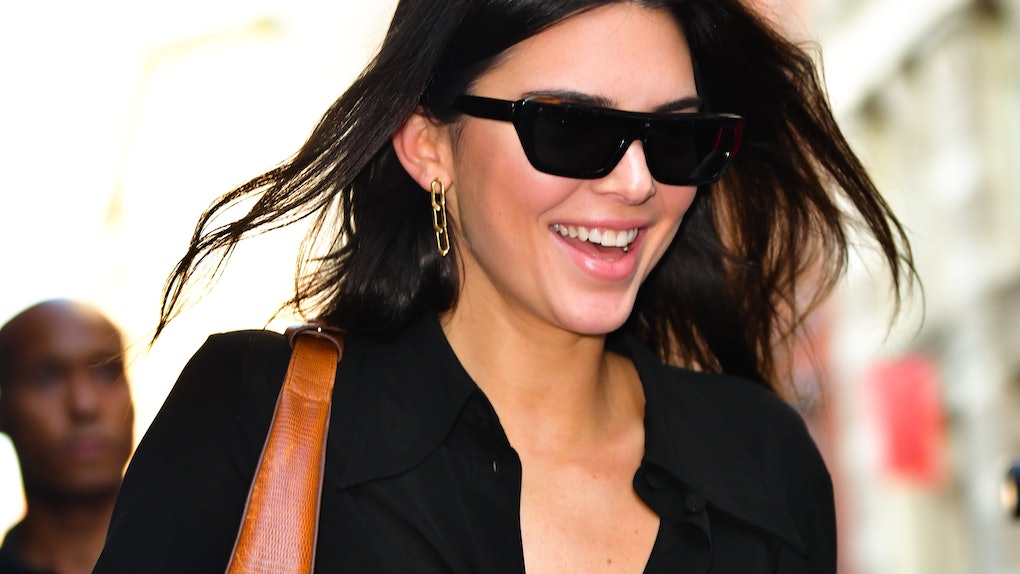 The KarJenner family have an undeniably tight-knit bond, but they're also not afriad to get brutally honest about each other when necessary. That opportunity for brutal honesty came knocking on Dec. 10, when Jenner was interviewed by Harry Styles on the Late Late Show With James Corden. Yes, as in her ex-boyfriend. When Styles asked Jenner the ultimate hot seat question about her sisters' parenting abilities, Jenner surprisingly answered instead of dodging it. Kendall Jenner's ranking of the Kardashian sister's parenting skills will leave you shook.

First of all, it should be noted Jenner could have fully avoided this question, but there was a caveat. As part of Corden's signature game — "Spill Your Guts or Fill Your Guts" — she opted out of the food portion. And TBH, I don't blame her. Brutal honesty just might be better than sipping 1,000 year old eggnog or eating bug truffle.

So Jenner, who happens to be the only sister in the family without kids, got down to the dirty work. Her list of KarJenner parents from best to worst put Rob Kardashian at No. 1, then Jenner said: "it would be like, Khloé, Kim, Kylie, Kourtney."

Something tells me Kourtney is going to have a word or two with her sis, but, to be fair, Kendall did say she thinks all of her sisters are "amazing" parents.

Styles definitely hit Jenner with a zinger right off the bat, but don't worry, she turned the tables soon after. Next, it was time for Jenner to ask Styles a hard-hitting question.

"Which songs on your last album were about me?" Jenner asked Styles, who politely chose to eat a bite of "cod sperm" instead of answering. As entertaining as that was, I'm now dying to know what his answer would have been and it's now killing me inside.

As fans know, Styles and Jenner dated briefly, and were spotted hanging out frequently between late 2013 and early 2014. Their romance cooled off that year but they reconnected in 2015 on a trip to St.Barts. Their romance didn't last the long haul, but it looks like these two are still the best of pals and can definitely still share a laugh.