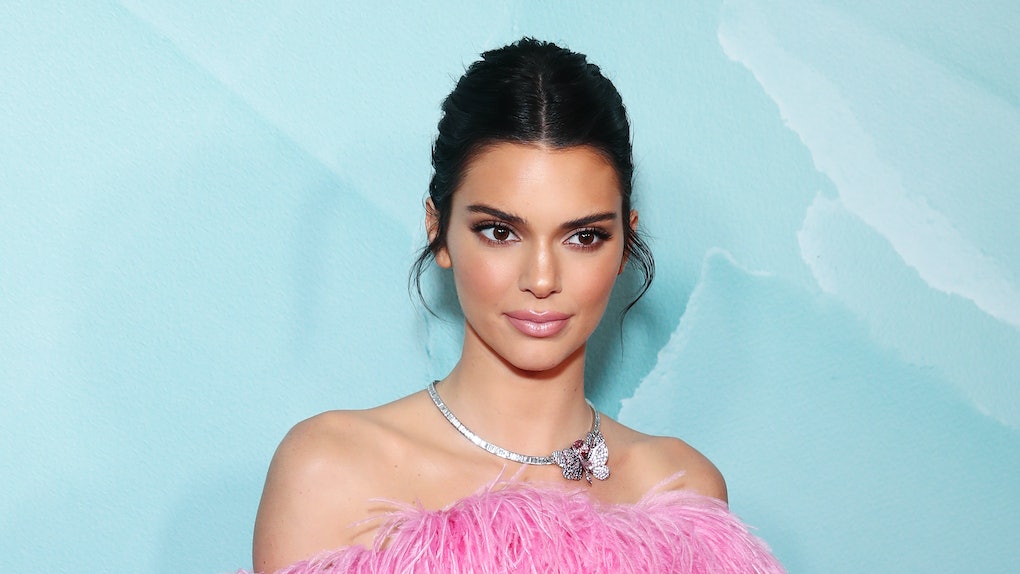 As one of three girls myself, I've always enjoyed the fact that each of the Kardashian-Jenner sisters has her own unique sense of style, be it a love of embellished Balmain dresses or a penchant for biker shorts. That said, they've been known to play dress up in each other's closets every now and then, so when fans started pointing out that Kendall Jenner and North West wore the same top recently, I had to know if this was the case. Did Jenner lend her adorable niece her feathery crop top — or, perhaps more strange, did the model borrow it from the five-year-old tot? These are the questions that keep me up at night, people, but fortunately, Jenner has provided some answers for those of us desperate to know the truth.

Given that Kendall is a model, she has access to the coolest clothes in the world, so it's no surprise she's become a bit of a style icon, even winning Daily Front Row's award for Fashion Icon Of The Decade back in 2017. While she does document her looks on Instagram, not all of her best fits make the cut, but that doesn't mean they aren't just as chic.

A few of Jenner's recent posts show a newfound love of feathery finishes:

So even though this orange and red top didn't make it to her Instagram grid, that's not to say it isn't chock full of fluffy, feathery goodness:

So cute, right? Apparently, Jenner wasn't the only family member that thought so. Fans were quick to point out that Kim Kardashian West's daughter, North West, wore the exact same top a few days earlier, at one of Kanye West's Sunday Services.

OMG, so who borrowed whose shirt? Sadly, Jenner was quick to confirm to People that this wasn't a case of familial closet raiding, but instead pure coincidence. “Oh my god, it’s hysterical. North and Penelope [Disick] I think got it before me at the outlets on the way to Palm Springs a while ago,” Jenner told People, adding that she then bought the samew top a few weeks later. "We had no idea that each of us bought the shirt,” she insisted.

TBH, North has a killer sense of style, so I'm not even surprised that she bought it first:

Jenner also told People that she had her top tailored to be more of a crop top — which only fueled rumors that she was wearing North's shirt, since it looked small on her tall frame. “I ended up wearing it really thinking I’m a crazy person, Jenner told People, "Honestly, I should have lied and said it was North’s shirt because that would be hysterical!”

When Kim K heard the news of her daughter and sister matching, she declared the duo to be "Style twins." So cute:

TBH, I wouldn't be surprised if Jenner does end up borrowing a look or two from North, given that her shirts probably would fit Jenner like crop tops. Jenner confirmed to People that the idea isn't all that wild: "“I would borrow clothes from North, she is stylish. She dresses herself, like most of the time she picks out all of her outfits.” Maybe Jenner can arrange for North West to walk a runway sometime? I just know she'd kill it.