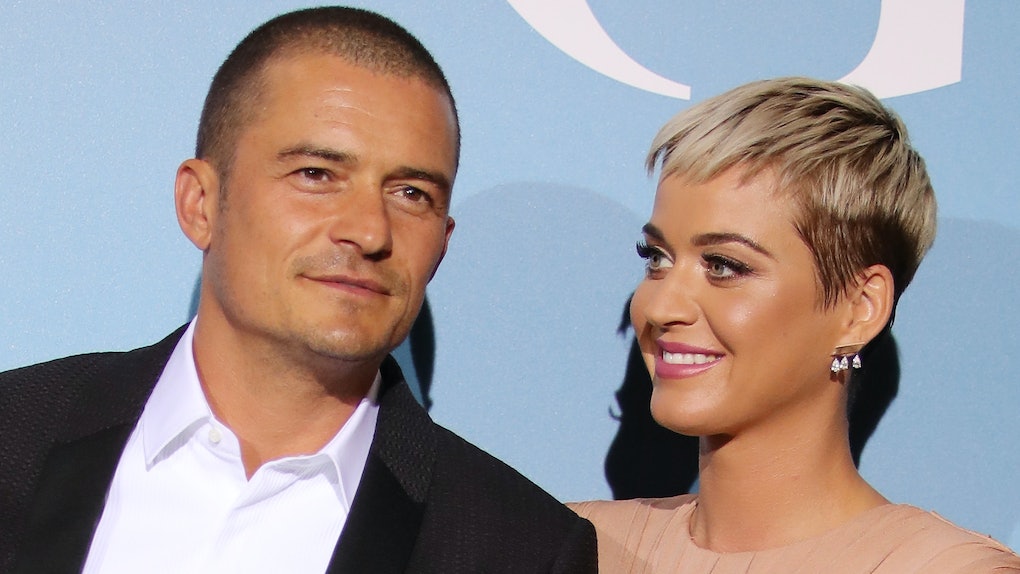 Ugh, finally! Fans have suspected that Orlando Bloom and Katy Perry have had a continually blossoming relationship behind the scenes (pun intended) but haven't been able to guess how close the two have really grown. They've played quite the game of on-again-off-again, but with Katy Perry's engagement confirmation, fans now know they are officially on, like, for life. There's just one little nagging outstanding detail fans have noticed about Katy Perry's engagement ring from Orlando Bloom and people want answers. You guys, doesn't it look awfully similar to his ex-wife Miranda Kerr's engagement ring? Or is it just me (everyone)?

Katy Perry shared the good engagement news via Instagram on Valentine's Day 2019. The photo she chose is an extreme close-up of her flower-shaped bauble featuring a stunning pink stone surrounded by diamonds. She and Orlando are standing in front of what appears to be tons of heart-shaped balloons and, while you can't see much of their faces, they look so, so happy. She captioned her picture, "full bloom," which is one of my favorite wordplay moves to date. Bloom re-shared the photo on his Instagram feed, too, and captioned his picture, "Lifetimes." (Sweet, but not hilarious. Just saying.)

Take a look at this beauty:

According to Cosmopolitan, the ring is estimated to be worth around five million dollars. NBD.

While the playful style and hot-pink hue are so Katy Perry, fans couldn't help but notice the shape of the ring closely resembles the engagement ring Bloom previously gave to Kerr.

Kerr and Bloom were married for three years and split in 2013. In 2010, Bloom proposed to Kerr with a different gorgeous ring, this time all diamonds, though they were grouped together in a shockingly similar fashion to Perry's stones. Kerr's ring also featured a large solitaire surrounded by a series of smaller diamonds. At first glance, I thought, "I don't know... they aren't that similar," but on my second glance...

DJ, play that track back.

Who knows if Perry and Bloom designed her ring together or if he just has a thing for flowers because his last name is Bloom and it's in his DNA or something. At the end of the day, it doesn't really matter how fans feel about Perry's engagement ring. It's about how she and her future hubby (!) feel.

On Valentine's Day prior to announcing their engagement, Bloom shared this foreshadowing message on his Instagram story:

A shallow person will have only shallow relationships. Real love is not one person clinging to another , it can only be fostered between two strong people secure in their individuality. Antoine de Saint- Exupery, author of The Little Prince wrote in a work called Wind, Sand and Stars, ‘Love is not two people gazing at each other, but two people looking ahead together in the same direction. Wisdom for Modern Life by Daisaku Ikeda. February 14, 2019 ❤️got nothin but love for ya’ll ❤️.

He has nothing but love for us and Katy Perry, obviously.