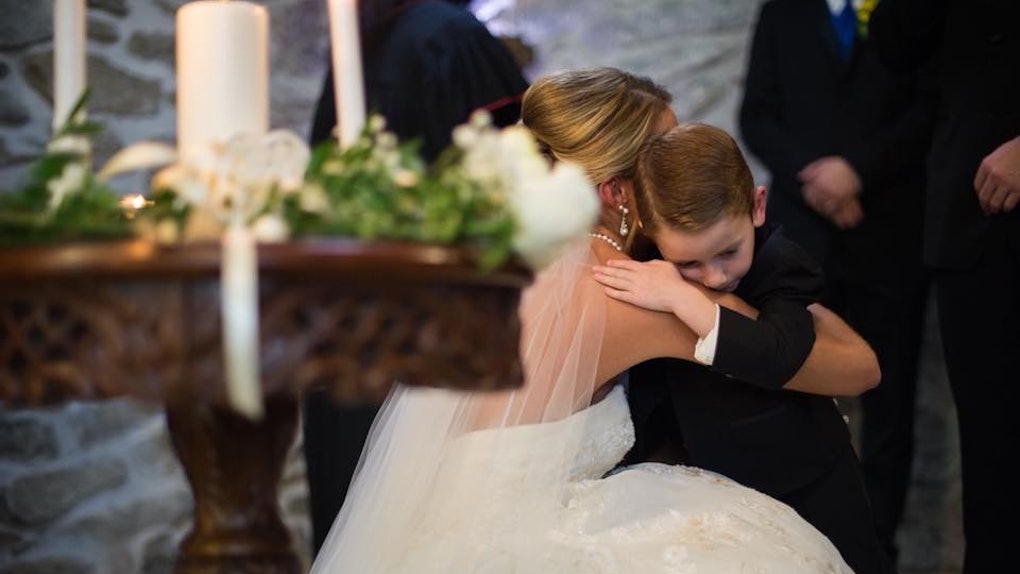 Getting married is always (or almost always) a deeply emotional romantic process. I mean, you're standing there in front of all of your loved ones making a promise to spend the rest of your life with this other person. You're promising to stand by their side through thick and thin and you're effectively kissing any shot at a single life goodbye. It's intense stuff. But things get even more intense when it's not just one person you're making vows to, especially when it's that person... and their child... and their ex. And that's exactly what one bride had to do. Katie Musser's vows to her stepson and his mom show us a new kind of wedding vow that is guaranteed to make you burst into tears.

When you agree to marry someone you're vowing to do more than just spend the rest of your life with them, your vowing to take their life — and everyone within it — and make it yours as well. So, for Katie, marrying her husband Jeremy meant also agreeing to spend the rest of her life devoted to creating a family with his son, Landon; his ex, Casey; and Casey's new husband, Tyler. For most people that would be implied, but Katie wanted to make that promise clear by surprising everyone in her ceremony with pretty much the best vows you've ever heard in your entire life:

Once you've dried those tears off your face, let me hit you with some backstory.

In a Facebook post, Katie wrote that she had known Jeremy for six weeks before she even knew he had a child. When he finally told her, she assumed his child was a toddler. But no, it turned out Landon was actually three weeks old at the time. Yes, that's right. That means his child was born halfway through their very short courtship, and she was just hearing about it. Understandably so, she admits, "It was rough." The deceit caused trust issues between her and Jeremy, and even more, she and Casey hated each other.

But finally, Katie had enough of the negativity surrounding the situation and did something that most of us would never have the courage to do. She reached out to Casey in an attempt to make amends. Although it was hard at first, the two eventually learned to get along and even started going on regular "mommy dates," as Katie referred to them, where they grew extremely close. "She still treated me like his mom. It never was an act (although I thought it was at times)," she wrote. "She was true."

When Casey eventually got married to her new husband, Tyler, things weren't quite as easy for the two dads in Landon's life. "Jeremy and Tyler, couldn’t do it," Katie wrote. "They could not be friendly and they could not forget the past." But according to Katie, with time, even they managed to set their differences aside for Landon.

Finally, it was time for Katie and Jeremy's wedding. Katie wanted Casey to be involved in the ceremony, so she gave her the same bracelet she gave to all of her bridesmaids. "She deserved that and I wanted her to see her importance," Katie writes. Moreover, when the bride and groom went to give roses to their mothers during the ceremony, Landon gave one to Casey. And finally, of course, there were those amazing vows Katie surprised everyone with.

When addressing Casey and Tyler, Katie said, "First I want to thank you for accepting me as your friend and allowing me to be a part of Landon’s life. I promise to be an amazing mother to your son. I will guide, teach, and love him every single day."

And now, get your tissues out, because here's the sweet, sweet vow Katie made to Landon:

I promise to stand by you, listen to you and love you every day. I promise to love Daddy with all my heart. I promise to be a best friend to your mommy and your daddy Tyler. We will be one big family that I promise you will have for the rest of your life.

Check out the full story for yourself below:

You guys, I write about love a lot. But this, by far, is one of the most beautiful displays of it I have ever come across.