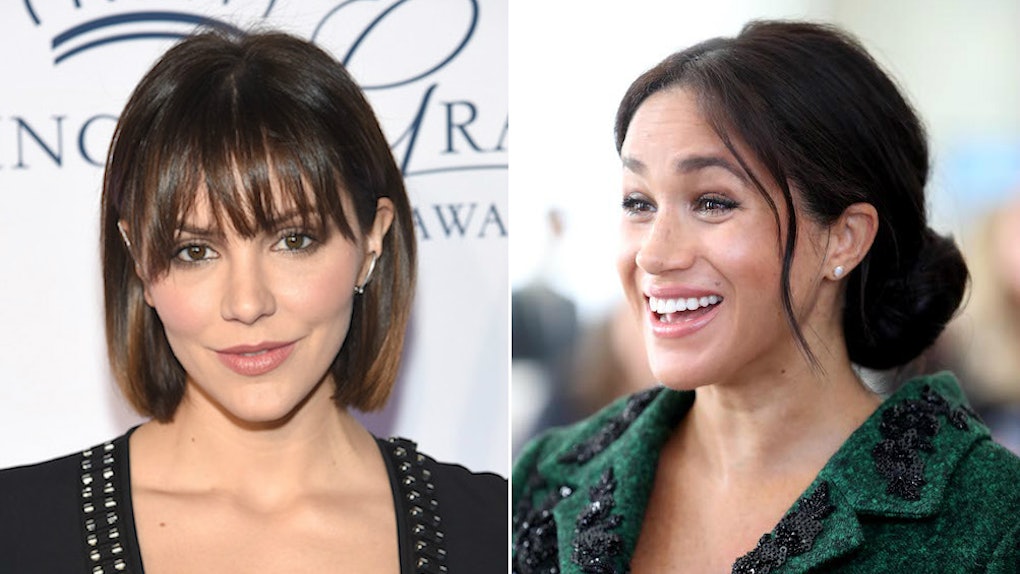 I don't know about you, but I personally love when I find out about a friendship between two well-known celebs who don't run in the same circle. Case in point? Singer and actress Katharine McPhee and royal Duchess of Sussex Meghan Markle. Yes, fam, these two beauties have known each other for years, and knowing that just fills my heart with joy. While the two don't see much of each other recently, Katherine McPhee's story about reuniting with Meghan Markle will make you feel nostalgic AF.

Apparently, the two grew up performing in musical theater together, where they starred in musicals as teens. Now that the two have very different (yet equally glamorous) lives in the spotlight, Markle and McPhee don't get together anymore, but they did run into each other at WE Day — an annual event held by the children's charity — on March 6, 2019.

The American Idol alum reunited with Markle after Prince Harry surprised the crowd by bringing Markle on stage with him for an unexpected appearance, and McPhee told the Evening Standard, "She was lovely, and she remembered me — she remembered my sister more specifically because they were in the same class."

But then McPhee told the publication that Markle gave her a little baby update, telling them, "She said, 'I’m just sitting around waiting for the baby to come.'"

That makes two of us, Megs.

During an appearance on Good Morning Britain on Tuesday, March 12, McPhee revealed that she posed with Markle for a photo together during the event, but wasn't able to receive it. "You know, the royals have to approve everything," she explained.

I have approximately zero photos with Meghan Markle, so take what you can get, Katharine.

To celebrate her role in London's production of the play Waitress, McPhee decided to share a throwback photo of herself and Markle looking ready to perform in stage makeup and bright red lips. On Jan. 31, she took to Twitter and wrote, "Both did musicals together as a kid. one is now the duchess and the other is starring on the west end. basically the same life if you ask me #tbt," and believe me when I say the photo is priceless:

McPhee shared a few more kind words about the Duchess of Sussex, telling the Evening Standard that Markle was "always lovely and always talented and always put together," which seems pretty accurate from what we've seen from the royal mama-to-be. She also noted that she'd love for Markle to come and watch her perform in Waitress, adding, "I’d like her to come to the show — but no pressure on her. I’m hoping she will, and I’m going to invite her through some mutual friends."

Just a heads up, Katharine: If Meghan RSVPs "no" for one reason or another, shoot your girl a text and I'll be on the next flight. Honestly, even if she RSVPs "yes," hit me up. I'm a musical fanatic and can't get enough Meghan Markle in my life, so this seems like a pretty perfect opportunity for me.