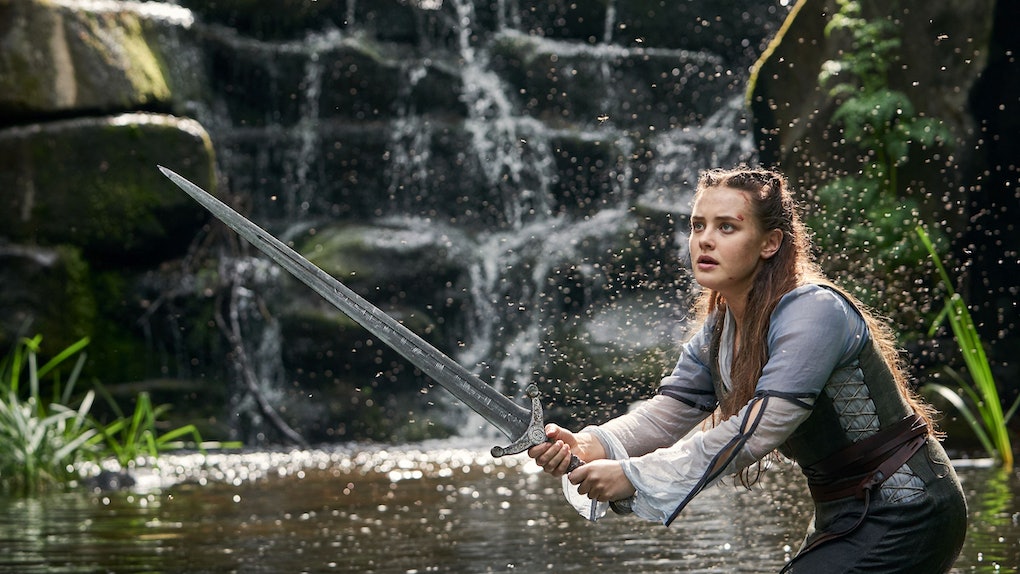 Cursed is Katherine Langford's first significant project for Netflix since 13 Reasons Why. Fans also know her from projects such as Knives Out and Love, Simon. But what Netflix viewers might not know is that Langford isn't just an actor. She studied musical theater at the Principal Academy of Dance & Theatre Arts in Perth, Australia, and is a trained singer. She's stretching those talents as part of her new role; the show features Katherine Langford's Cursed song "I Could Be Your King" as part of the soundtrack.

For those who haven't seen the trailers for the Netflix series, Cursed is a new take on one of the oldest high-fantasy tales in the Western canon, King Arthur. As most probably know, in the original story, a young man named Arthur draws an enchanted sword from a stone, in a feat that is supposed to determine who will be the one true king. Frightened and overwhelmed, Arthur tosses the Sword of Power (as it's known) into a lake. But as he considers his fate, the Lady of the Lake, Nimue, rises from the water and bestows it upon him, effectively declaring him king.

Cursed turns all this upside down. As the trailer asks: What if, instead of a King, the Sword of Power chose a Queen? What if the true ruler of the land was the Lady of the Lake?

Katherine Langford plays Nimue in the series, the woman who would be queen. Or, as her song says, she could be your king.

Armed with mysterious powers and a legendary sword, young rebel Nimue joins forces with charming mercenary Arthur on a mission to save her people.

With this song, Langford is proving she's all in on this project. Moreover, she seems hopeful it could create a space for more shows like it, if not a Season 2 if it hits big. Speaking to Digital Spy about the project, she said:

I get asked quite a lot by fans and people who love this genre, 'What it's like?' For me, Cursed is really interesting because it's not quite one or the other. It's a mixture of its own elements and it stands by itself in that sense... I think it's probably going to create its own little genre.

Cursed arrives with 10 episodes on Netflix on Friday, July 17. The soundtrack will be out later in 2020.