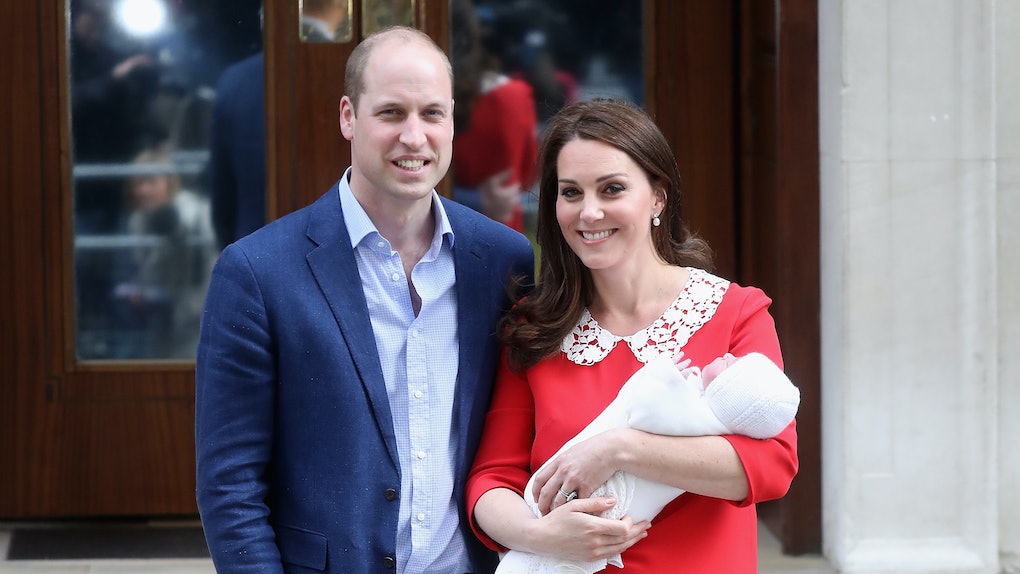 Prince Louis just turned a year old! And his proud mom Kate Middleton, Duchess of Cambridge, has taken a bunch of adorable photos to mark the occasion. The photos were shared by the official Kensington Royal Instagram account ahead of Louis' first birthday on April 23. I probably don't have to say this, but the photos are just too cute for words. More than that, though, Kate Middleton's photos of Prince Louis for his first birthday show that he's growing up fast!

In the photos shared to Instagram on Monday, April 22, you can see Prince Louis sitting outside and wearing the most adorable red sweater you've ever seen! His hair is combed over just like his dad's and he's smiling wide! Little Louis only has a couple of teeth to show off, but he sure seems proud to do it.

"The Duke and Duchess of Cambridge are delighted to share these new photographs of Prince Louis ahead of his first birthday tomorrow 🎈," they wrote. "The photographs were taken earlier this month by The Duchess at their home in Norfolk.‬"

Here's a look at the sweet photos:

"Happy Birthday Prince Louis! 🎉The Duke and Duchess of Cambridge are delighted to share this new photograph of Prince Louis ahead of his first birthday tomorrow," Kensington Palace captioned the post.

Here's a look at that additional photo:

It seems like Duchess Kate has really taken a keen interest in photography. But that shouldn't come as much of a surprise. Back in January 2017, Duchess Kate was honored by the Royal Photographic Society for the photos she took of Prince George and Princess Charlotte. In a statement, Michael Pritchard, the Chief Executive of the Royal Photographic Society, praised Kate for her "talent and enthusiasm" with a camera.

"She is latest in a long line of royal photographers and the society is pleased to recognize her talent," he said at the time.

And in February 2018, Duchess Kate penned a foreword detailing her love of photographing children for the Victorian Giants: The Birth of Art Photography exhibition at London's National Portrait Gallery.

“Children held a special place in the Victorian imagination and were celebrated for their seemingly boundless potential. This notion still rings true for us today and it underpins much of my official work and the charities I have chosen to support, and, indeed, my role as a young mother," she wrote.

She also talked about studying photography while attending university.

“As a student at the University of St. Andrews, I chose it as the subject of my undergraduate thesis and photographs of children in particular, which feature prominently in the exhibition, are of real interest to me,” she continued.

So, Duchess Kate's status as an amazing photographer, especially when it comes to her kids, is nothing new. But it is exciting to see new photographs taken by the Duchess herself. Happy birthday, Prince Louis!