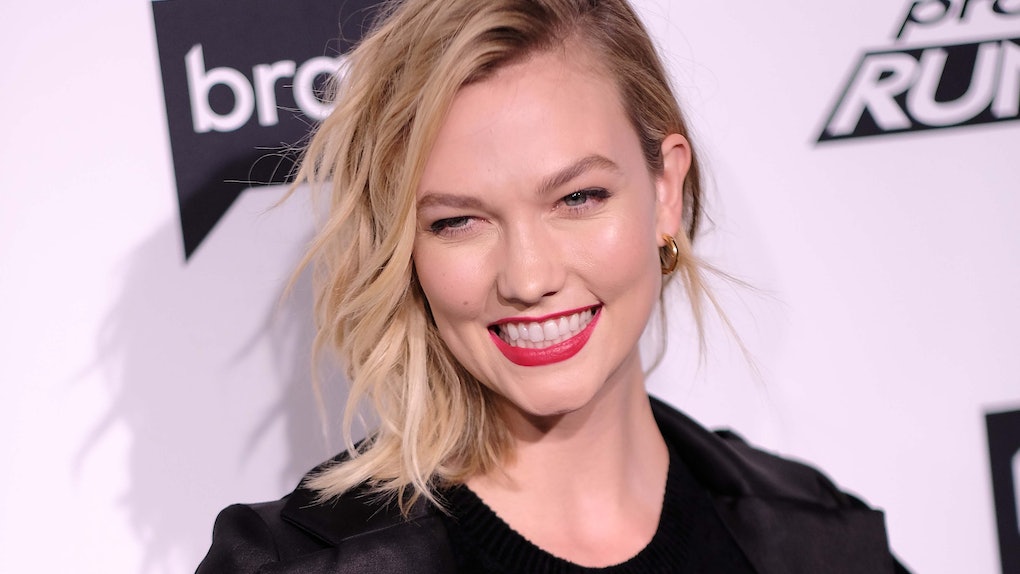 Karlie Kloss' Battle Ropes Workout On DOGPOUND's Instagram Looks So Fun, You Might Want To Try It, Too

There are so many different components to fitness that, even if you’ve written off all physical activity as the archenemy of your very being, I can almost guarantee there’s something in the space you’d enjoy. Maybe nothing sparks your interest at this very moment, but that can change pretty quickly, as new exercises — or, you know, new-to-you exercises — are always popping up. Take Karlie Kloss’ battle rope workout that was recently posted on the DOGPOUND gym's Instagram account, for example. I know myself, and personally, I’ve never been super interested in whipping a gigantic, thick rope while simultaneously hopping from side to side on a balance ball. It’s just never dawned on me to perform such a task. But alas, here I am, watching Kloss whip it good, and I can’t deny it: The fashion model has me hella intrigued.

Now, if you zeroed in on the term “battle rope” in that last paragraph and thought “Well, that sounds scary AF,” my initial reaction wasn’t much different. At first glance, battle roping sounds (and looks) really intense, and TBH, that’s because it kind of is (sorry). However, that doesn’t necessarily mean you should knock it before you try it. After all, according to Dr. Grayson Wickham, PT, DPT, CSCS, founder of Movement Vault, a battle rope is essentially just a really thick, heavy rope that was once made for ships, and it's since been adapted into a piece of training equipment across CrossFit gyms, martial arts gyms, HIIT gyms, bootcamp-style gyms, "and everywhere in between," he tells Elite Daily over email.

That doesn’t sound too intimidating, does it? We’ll just ignore the fact that anything associated with CrossFit gives me cold sweats. It’s fine.

I’m kidding, BTW (sort of). CrossFit does intimidate the ish out of me, but battle roping actually looks really fun — at least, the way Kloss goes about it. Which brings me to my next question: What is Kloss doing in DOGPOUND’s video, exactly?

Wickham tells me that the exercise Kloss is performing is "a lateral jump with one foot on a BOSU ball, while continually power slamming the ropes," to work "balance, coordination, muscular endurance, and full body stability.” Got that? Doesn’t sound too difficult, right? Well, here’s the thing: DOGPOUND’s clip only captures Kloss working the rope like a boss, but according to Wickham, it’s likely that battle roping is only one component of the 26-year-old model's routine.

“Battle rope workouts can be programmed in any way, but are usually designed to be executed with a short burst of intense activity followed by a brief or long rest period,” Wickham explains. The goal, he says, is to go as hard as you can, take a rest, and then repeat the movement. However, if you want a little more heat, battle rope exercises “can be super-setted with other lifts and movements, such as burpees, box jumps, cleans, deadlifts, planks, and squats,” he adds.

Are you sweating? Because I’m sweating, and I haven’t even left my computer chair.

So aside from working up a major sweat, battle rope exercises are apparently stellar for getting your heart rate up and toning the entire body. Wickham explains that the muscles you work in any given session with battle ropes will ultimately depend on how you're using the battle ropes. That being said, these workouts are typically full-body movements, with emphasis on the forearms and shoulders, Wickham clarifies.

“Because the arms and upper body are moving [during battle rope exercises], one’s core and leg muscles also have to work to stabilize the body,” he explains. “There are movements such as a rope slam squats in which greater lower-body involvement will be needed. In this case, the leg muscles will be worked a lot more.”

Sounds like a pretty sweet deal, right? I mean, if I can enjoy myself half as much as Kloss seems to be enjoying herself in the video, I’d definitely give battle roping a try. Granted, Kloss might be huffing and puffing throughout the actual rope work, but she literally strikes the most enthusiastic pose at the end of DOGPOUND's video, as if the BOSU ball was a runway, not a squishy balance accessory, so there has to be some level of enjoyment there, right?

Unfortunately, unless you own a pair of battle ropes, this isn’t the type of workout you can exactly replicate at home. That being said, because the battle ropes help you execute full-body, high-intensity movements, Wickham suggests practicing kettlebell swings, ball slams, and burpees to yield similar results.

The good news is, if DOGPOUND's video of Kloss sparked your curiosity, and you've never maneuvered battle ropes before, Wickham says this type of exercise is actually perfect for beginners because it's relatively easy to learn, with the added bonus of a low risk of injury. "They also allow beginners to get in a great workout in a short amount of time," as well as "work a large amount of muscles, with a strong emphasis on core engagement," Wickham adds.