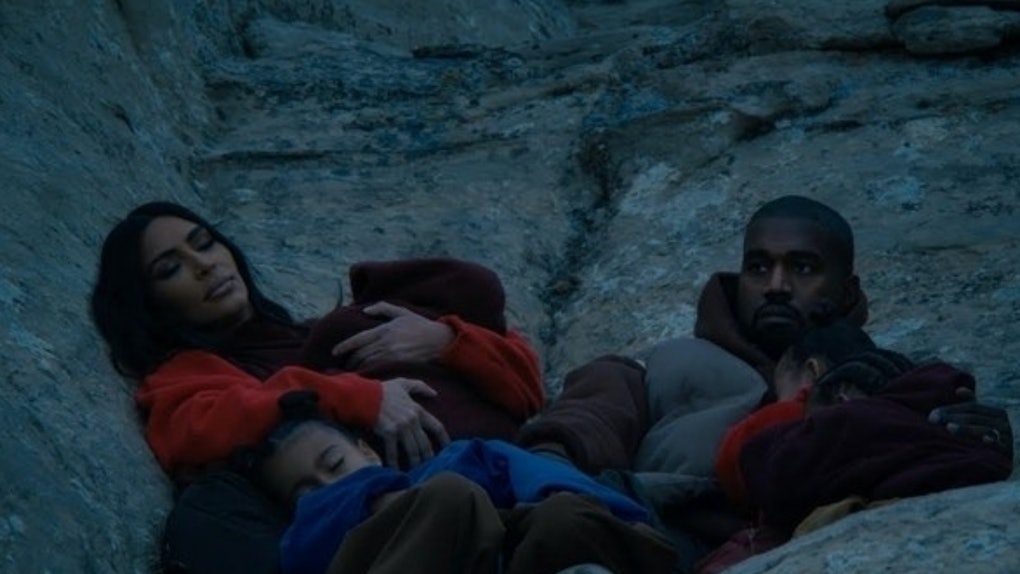 Say what you want about Kanye West, but you can't deny he's 100% a family man. He always shows his support for his wife, Kim Kardashian, whenever he can and also isn't shy about expressing his love for his four children, North, Saint, Chicago, and Psalm. This Thanksgiving, the rapper honored his family in the best way possible by including a few of them in his new music video for "Closed On Sunday." You need to watch Kanye West’s “Closed On Sunday” music video to see which Kardashians are featured.

Surprisingly, West didn't drop his new music video on an actual Sunday (or at a Chick-fil-A), despite the title and lyrics. Instead, West released "Closed On Sunday" on Thursday, Nov. 28, aka Thanksgiving day. If you ask me, I think dropping the video on Thanksgiving was way better, especially since the MV is all about family. Throughout the video, several members of the Kardashian family make appearances.

The video, which spans only two-and-a-half minutes, takes place on a barren landscape. It begins with West, Kardashian, and their four children lying in a rock formation as a group of armored vehicles make their way toward them. The family then walks around the empty landscape, while the vehicles unload their other family members, including Kris Jenner.

Once everyone is out, West, Kardashian, North, Saint, Chicago, Psalm, and Jenner are joined by Kourtney Kardashian, her three children, Mason, Penelope, and Reign, and West's Sunday Service choir. They pose for a group shot, before West and his Sunday Service choir bust out the song's final lyrics. The video concludes with North crying out, "Chik-fil-A!"

West's "Closed On Sunday" is the rapper's second music video off his long-awaited ninth studio album, Jesus Is King, released on Oct. 25, after multiple delays. The album was originally supposed to release on Friday, Sept. 27. After West failed to release the album as planned, Kardashian promised fans it would release on Sunday, Sept. 29, but it never did. West then told fans it would drop at midnight on Oct. 25. That night, he even made a surprise appearance on Jimmy Kimmel Live! and announced, "Yeah, [the album]'s out now," despite the fact it was nowhere to be found online.

Following his appearance on Jimmy Kimmel Live!, West tweeted, "To my fans. Thank you for being loyal & patient. We are specifically fixing mixes on 'Everything We Need,' 'Follow God,' & 'Water.' We not going to sleep until this album is out!"

True to his word, Jesus Is King arrived hours after West's tweet. Despite the delay, fans were happy to have the album because they almost believed it wasn't coming. Last year, West pushed back his Yandhi album, too. It was originally meant for a September 2018 release, and then a November release, but it never came. Due to West's track record, fans began to think they would never hear Jesus Is King, but luckily, West pulled through this time around. Now, fans have the "Closed On Sunday" music video to gush over, too.

More like this
Rosé From BLACKPINK's "Gone" Music Video Is The Ultimate Sad-Girl Aesthetic
By Abby Monteil
Olivia Rodrigo's "Deja Vu" Music Video Outfits Are All Delightfully Retro
By Margaret Blatz
Which Album Will Taylor Swift Re-Release Next? Her Hints Have Fans Shaking
By Brandy Robidoux
Stay up to date