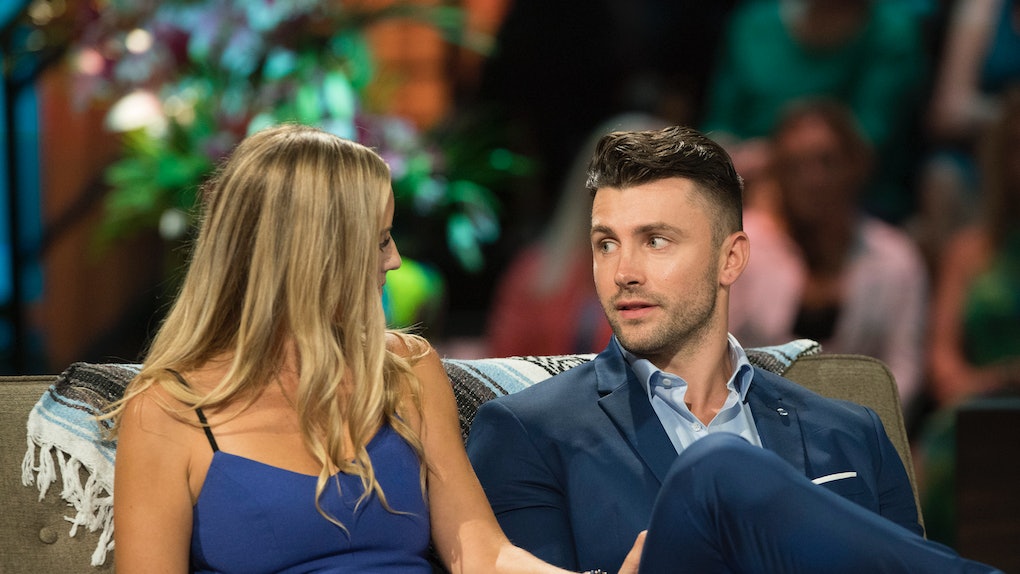 Oh, Kamil and Annaliese. The Bachelor in Paradise couple that managed to make it to the finale of Season 5 against all odds have had quite the journey. And on Tuesday's BIP finale their relationship took an unfortunate turn that left audiences stunned. Kamil and Annaliese's breakup on Bachelor in Paradise was one of those reality TV moments that had me covering my eyes and screaming "nooooo!" at my screen.

Let's rewind for some background since the episode started off strong for Kamil and Annaliese. In post-fantasy suite bliss, they stepped on that storied beachside podium set (which is typcially reserved for engagements) to express their feelings. Kamil told her:

From the first day we had together I knew that you were a special woman. I was very nervous and my heart was racing and I know you had a big place in my heart. I realize that I was falling in love with you and I couldn't live without you. Annaliese, I love you. I want to have a future together.

But while Annaliese was clearly ready to take the next step towards marriage and babies, Kamil just wasn't there yet. He told her he couldn't give her a proposal now, but they could further explore what they started in Mexico. Then they exchanged I love yous. All good? Not quite.

What Kamil did next was a shocking move: He broke up with Annaliese in front of the Bachelor in Paradise reunion audience. He told Chris Harrison, the crowd, and, um, his girlfriend:

I know Annaliese is ready for a guy to get down on one knee right now to get engaged but you deserved the best and I think I might not be the guy for you because I just feel like I kind of lost that spark we had in Paradise after leaving.

"It’s just not working out for me. I think it would best for us to just slowly part ways," he added.

Slowly part ways? Is the first part of that process breaking someone's heart on national television? The studio audience and Annaliese were visibly shaken by the news, so much so that boos erupted from the seats.

“We literally booked an Airbnb to stay the week together,” Annaliese told him, hammering home how much of the bombshell he was dropping. But Kamil maintained he just couldn't make it work no matter how hard he tried.

"I don't know, it's just not there, I think we just have to move on from this," Kamil told Annaliese backstage. And then... she walked away.

Kamil was a later entry in Paradise this season. The Bachelorette alum known for being a "social media participant" (he's actually in real estate and works as a personal trainer/model) hit the beach just in time to give Annaliese new potential to find love during her stay in Mexico. She had a rough road leading up to his arrivial, initially connecting with Jordan only to lose him to Jenna. Then she hit it off with Kenny before he left the show abruptly so he could return to his daughter. When Kamil emerged on the scene as a beacon of hope, things were looking up. Even when confronted with Shushanna, who admitted she had feelings for Kamil and felt he could reciprocate, the pair jumped above every hurdle in their way. Even when strong couples like Kevin and Astrid split, Kamil and Annaliese's seemingly unbreakable connection propelled them forward.

"It's the best feeling in the world to think that he could be getting down on one knee tomorrow," Annaliese admitted on the first half of the finale prior to their night together. "But I'm a couple steps ahead and I don't want to scare him away. And I have such a good thing and we have such a good thing."

After Monday brought them closer, it seemed completely plausible that he would pull out a Neil Lane sparkler and surprise the haters in the big finale. He reassured her that he could see them being outside of Paradise and that he felt himself falling in love. That sentiment rings true on at least one level — the couple kept things going after cameras stopped rolling. Apparently, when they started rolling again, that's when he decided to call it quits for good.