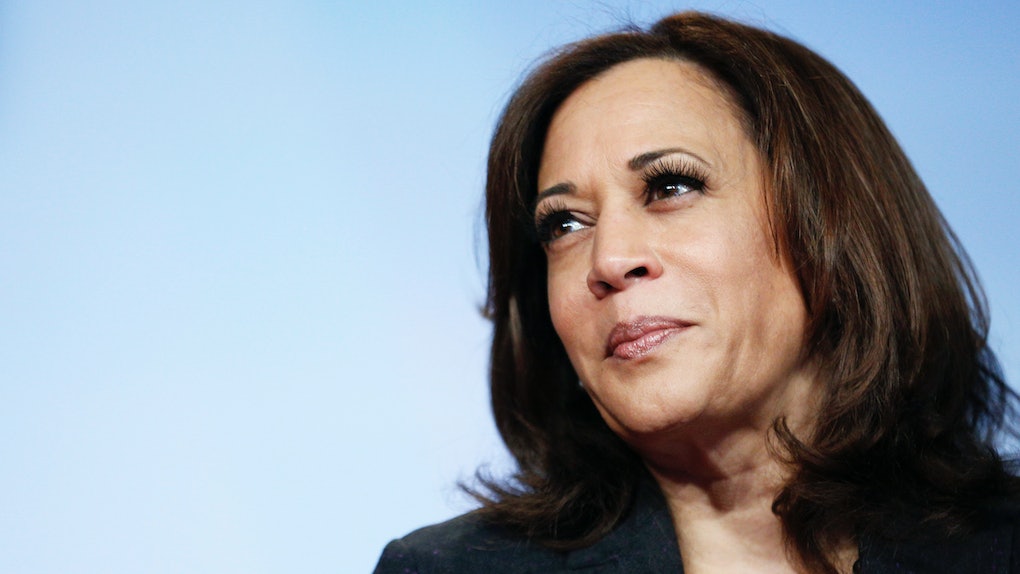 Police reform has always been a hot button issue in the country, but with a renewed spotlight on anti-racism and continued protests against police brutality, it’s coming to the forefront of the 2020 presidential election. On Tuesday, Aug. 11, presumptive Democratic presidential nominee Joe Biden announced Sen. Kamala Harris (D-California) as his running mate, and given her previous role as California’s chief law enforcement officer, you may be wondering about her stance on this important issue. As the two hit the campaign trail, Kamala Harris' stance on defunding the police has a community-based focus.

In recent weeks, many people have called to defund the police, which means cutting police budgets and reallocating that money to communities to invest in housing, health care, and education. The Democratic senator from California has previously held law enforcement roles in her career, including the top spot as California’s attorney general from 2011 to 2017, before being sworn in as a U.S. senator in January 2017. Harris’ stance on police reform has evolved throughout her career. Most recently, in a June 10 interview with The New York Times, Harris differentiated between defunding police and reinvesting in communities. “No, we’re not going to get rid of the police,” she said. “We all have to be practical. But let’s separate out these discussions.”

In a June 8 interview on The View, Harris further discussed her view on the topic without giving explicit support for the defund movement. Harris said it’s about "reimagining how we do public safety in America.” She argued that providing safety in communities requires additional resources, which include more funding for the public education system, affordable housing, capital for small businesses, and affordable health care access, rather than increased policing. “We have confused the idea that to achieve safety, you put more cops on the street," Harris explained.

According to The New York Times, Harris often didn't intervene in cases of police killings during her time as deputy district attorney of Alameda County from 1990-1998 or when serving as California’s Attorney General. During a January 2019 Town Hall, Harris responded to a question about whether she opposed legislation during her time as attorney general which would have required her office to investigate police-involved fatal shootings. Harris said during the CNN Town Hall, “I did not oppose the bill. I had a process when I was attorney general of not weighing in on bills and initiatives, because as attorney general, I had a responsibility for writing the title and summary. So I did not weigh in.”

More recently in a June 4 tweet, Harris voiced her support for holding officers accountable in police-involved shootings, citing the case of Breonna Taylor, who was killed by officers at her Kentucky home in mid-March. As of Aug. 22, the officers involved have not been charged in connection with her death. Harris also supports reform which would ban choke holds, racial profiling, and no-knock warrants, per a June 8 press release.

Harris’ stance on policing began to shift even before she was in the national spotlight. According to USA Today, during her time as district attorney of San Fransico Harris dismissed of marijuna possession cases and handed down lenient sentencing for marijuna sale cases, which she often reduced to misdemeanors and gave no jail time. She also refused to seek the death penalty in sentencing for higher level offenses, such as a 2003 case involving the death of a San Francisco police officer. In 2005, Harris launched a “Back On Track” initiative to provide more second-chance sentencing for juvenile felony court cases which prevented minors being sentenced like adults, and aided in reducing recidivism in minors following extensive community service-based work and rehabilitation through an outlined plan and sentence deferral. By the end of her term as the attorney general of California in 2016, Harris implemented an expansion of police misconduct investigations, reviews of two municipal police departments, and supported an investigation into the Justice Department in San Francisco, although critics at the time said it didn’t go far enough.

The Biden-Harris ticket will likely take a middle-of-the-road approach to police reform, based on Biden’s previous statements. In the 110-page Unity Force Task recommendations announced on July 8 in conjunction with Sen. Bernie Sanders (I-Vermont), Biden advocated for some reallocation of police funds while simultaneously increasing police budgets for reform efforts. In a June 10 op-ed for USA Today, Biden shared plans to add $300 million in police funding to improve relationships with the communities they serve. The policy would also include reforms like a national use of force standard, mandatory body cameras, and an increase in police force diversity. Elite Daily reached out to Harris for comment on Biden’s proposed plan, but did not hear back at the time of publication.

The Biden campaign’s rapid response director Andrew Bates told NPR in a June 8 statement, "Vice President Biden does not believe that police should be defunded," but his plan would reallocate funds from departments, and his $300 million funding plan would also include money allocated for "public schools, summer programs, and mental health and substance abuse treatment separate from funding for policing." On the opposite side of the aisle, President Donald Trump has repeatedly voiced his opposition to defunding the police.

As the United States continues to grapple with the issues of police violence and systemic racism, you’ll likely see Harris and Biden continue to address the issue. And time will tell whether the pair will move on the issue of defunding the police as Election Day nears.