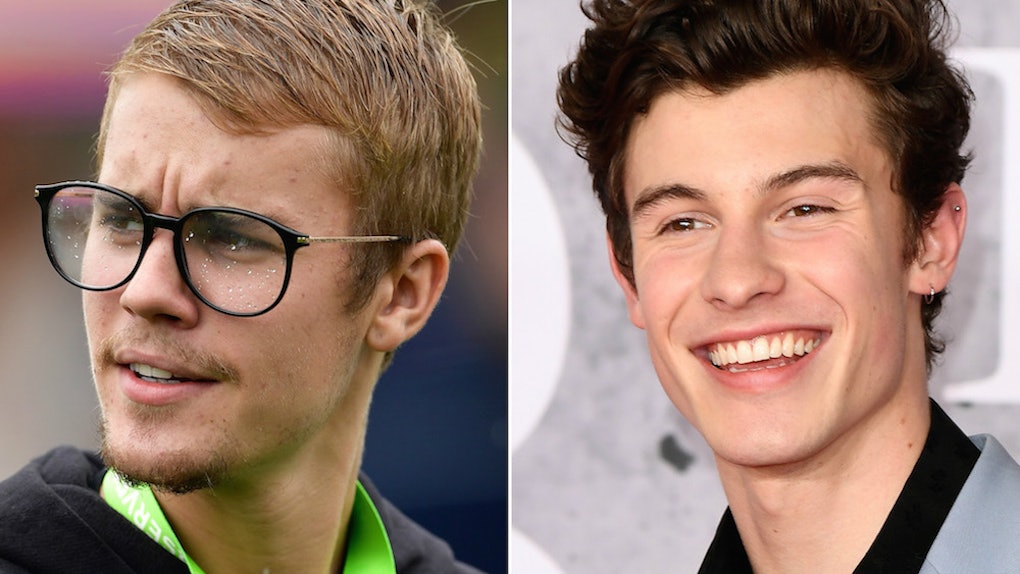 Don't come for Justin Bieber's throne — a message from Justin Bieber. It's been a while since The Biebs released any new music. In the meantime, Shawn Mendes has been growing in popularity. So much so, in fact, that he was recently dubbed a "prince of pop" by Observer magazine. The "In My Blood" singer, who is currently on a world tour for his self-titled album, posted his Observer cover on Instagram this weekend, and Bieber had some words about it. Justin Bieber's reaction to Shawn Mendes' "prince of pop" title came through a comment Bieber left on Mendes Instagram, and it's definitely got Mendes in ~stitches~.

I think it's pretty safe to say that Shawn Mendes is at least a prince of pop. The guy has a fandom, he makes the teens go wild, his concerts sell out, he wins awards and, I mean, look at him! He's a heartthrob. He checks all of the boxes. He also might have dated Hailey Baldwin at one point...? Which is what makes this comment from Justin Bieber so freaking funny in a "what in the actual hell is happening?" kind of way.

When Mendes posted his "prince of pop" Observer cover on April 7, Bieber slid into the comments section, saying,

Hmm Gonna have to break a few more records to dethrone my title there bud (canadian voice)..but if you want we can play hockey for it but i heard your a real bender on the ice we could just drop the buckets and tilt for it.

At first, I definitely thought this was Bieber throwing some shade at Mendes (who is also Canadian). But this seems more like some friendly competition rather than any kind of shade. It's also very epic of Bieber to slip into this comment section and be like, "Lol this is cute, but let's not forget who the real prince of pop is." Wait... is that where the shade lies? Oh... oh. This might be shady.

The @CommentsByCeleb account got a screenshot of the whole thing that you can see over on their account.

Mendes (who, again, might have once dated Bieber's wife!) didn't seem to take it that way, though, as he responded to Bieber's comment (particularly that whole hockey game business) in stride.

"@justinbieber LOL any time any day you just let me know!!!!!!" Mendes said back. Are these two having fun, or they about to duel for the title of prince of pop over a game of ice hockey?! Canadian singers, man.

People in the comments section of the @CommentsByCeleb post are torn about how to take this whole exchange.

"Justin has been wilding on Instagram lately," one user said.

"The fact that Shawn is Hayley’s ex makes this a whole new level of weird," another said, highlighting my exact thoughts.

But one fan really got down to the heart of the issue here. "That’s the most canadian thing i’ve ever read and i’m here for it honestly," they said. Yup, that about sums all of this up. Gotta love our two Canadian princes of pop.