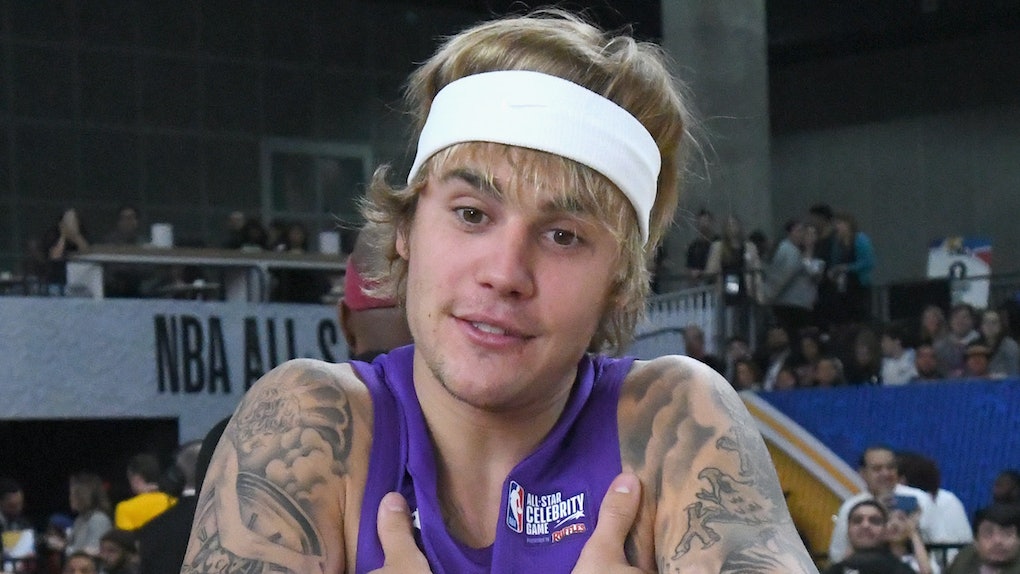 It isn't too late now to say sorry. And that's what the Biebs just did following an April Fools joke that was in bad taste. And unlike the typical celebrity apology that seems like more of a PR requirement than a genuine apology, Justin Bieber's apology for his pregnancy April Fools prank seems sincere.

On April Fools Day, Justin Bieber and Hailey Baldwin pulled a prank that's, unfortunately, an April Fools staple. The "Sorry" singer posted a sonogram to his Instagram on Monday, April 1, that was dated Feb. 2 (the year was cut off). Obvi, this made fans and friends of the Biebers think they were having a baby. But it was also April Fools' Day, so a bunch of people in the comments section were also taking this photo with a heavy dose of skepticism.

Then Bieber took the prank even further by posting a second picture, this time of Baldwin sitting in a doctor's office checking out her "bump" with two doctors.

"If U thought it was April fools," Bieber said in the caption. I've gotta admit, he got me on this one. I genuinely thought this was real for a hot second, as did a lot of the internet. But a couple of hours later, he posted another sonogram that replaced the baby with... a puppy.

"Wait omg is that a,,, APRIL FOOLS," Bieber said in his caption. Cue the eye rolls from everyone who was duped by these posts (me).

You can check out the Biebs' prank here.

Here's the thing with pregnancy April Fools pranks, though: While lots of people still do them because it's been considered to be a funny and easy prank to pull off for a long time, the prank is insensitive to people who are struggling to start a family.

Whether it's a woman who just had a miscarriage and is upset about it, or it's a couple doing expensive and painful fertility treatments, or it's people trying to adopt and/or find a surrogate, or anyone who wants children and is struggling to make that happen, jokes like Bieber's can be hurtful to them. It's the same principle behind why it's not cool to wear a fake pregnant belly on Halloween if you're not pregnant: there are people struggling with something you just made a joke out of.

Bieber apparently was not aware of this sentiment. After receiving backlash about the prank, he apologized on Instagram.

The first part of the apology started out rough.

"There’s always gonna be people offended, there’s also people who don’t take jokes very well, I am a prankster and it was APRIL FOOLS," Bieber said. Not a great way to start, but his caption improved.

"I didn’t at all mean to be insensitive to people who can’t have children," Bieber said. "A lot of people I know, their first go to prank on April fools is telling their parents they are pregnant to get a big reaction. But I will apologize anyway and take responsibility and say sorry to people who were offended."

The rest of the apology read,

I truly don’t want anyone to be hurt by a prank.. it’s like when I shoved cake in my little sisters face for her birthday expecting her to laugh but she cried. You sometimes just don’t know what will hurt someone’s feelings not to compare pregnancy with cake in the face but it’s just to paint the picture of not knowing what will offend. Some might have laughed but some were offended .. I think With pranks u sometimes have to roll that dice. #prankster #dennisthemenace #sorry#truly

That is a decent apology, Biebs. Now, no more pregnancy April Fools pranks!