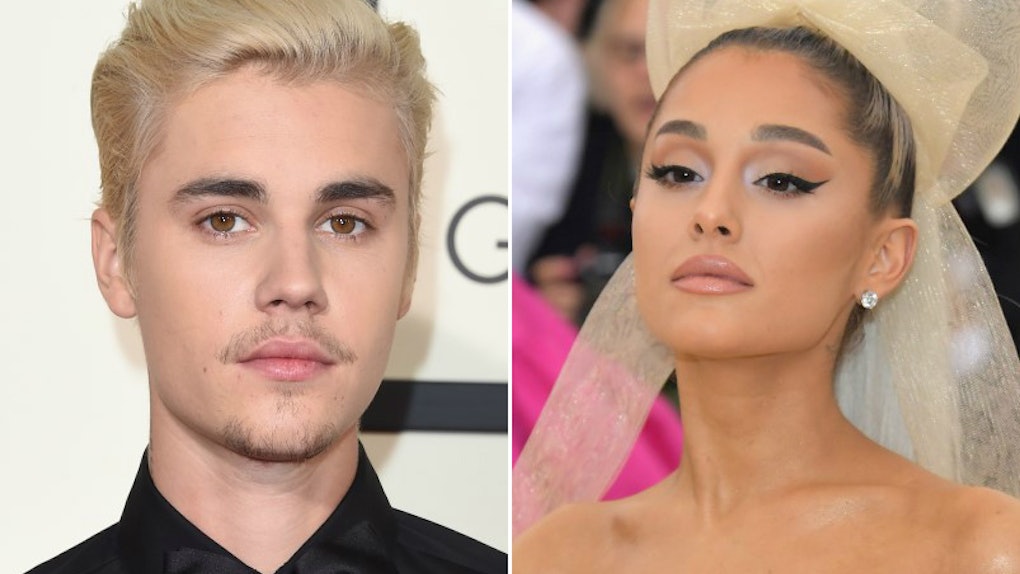 Justin Bieber and Ariana Grande are having a bit of a rough time right now and it’s all thanks to Coachella. According to some critics, Bieber and Grande’s joint Coachella performance left a lot to be desired. But the two stars are not going to take unfair criticism lying down. In fact, they’ve taken to Twitter to share their thoughts on the matter. Justin Bieber and Ariana Grande’s responses to claims he lip-synced at Coachella will definitely boost your respect for them.

It all started when Morgan Stewart of E!’s Nightly Pop poked fun at Bieber’s performance of “Sorry” at Coachella.

“Poor song started before him,” Stewart said of the performance, according to Us Weekly. “I did not realize it was gonna be that bad. He definitely looks like he put an OXY pad on that forehead, but I don’t care. That is f*cked up!”

Yikes. Those are harsh words, indeed, and Bieber was not having any of it. Bieber took to Twitter on Wednesday, April 24, to call Stewart out for her unnecessary criticisms and laid all his thoughts out for her.

“Just saw a video of you ripping me to shreds saying I was lip-syncing,” Bieber tweeted at Stewart. “They played the song and i just sang overtop of it.. regardless why spend your time tearing people down. It’s People like you that are bullies at school that are making kids suicidal.”

He continued, “imagine if you spent even half the time you spend laughing at other peoples expense actually building people up and encouraging people how much positivity you could bring. What hurts about this is the fact that you have a platform to make a difference.”

In addition to calling Stewart out for bullying, he also explained that being on stage gives him purpose.

“Think about how awesome it felt for me to be on that stage after being away for so long the excitement and joy it gave me doing the thing i love the most, i sang to to backtrack like most cameos do this is a normal thing,” Bieber continued.

Wow, what an amazing response. You can check out Bieber’s tweets down below:

Like a true friend, Ariana Grande came to Bieber’s defense in a series of now-deleted tweets.

“Your fans, friends & the world is thrilled to have you back,” Grande said after quoting one of Bieber’s tweets. “Everyone was so happy to see u smile like that. no one will ever understand how it feels to be u, but it’s not their job to. take care. make music. u are loved. p.s. everyone in that video will b streaming.”

She also backed up Bieber’s claim that singing along to a track is a totally normal thing to do.

“We also decided to do this ten minutes before my set started. we had 0 soundcheck, 0 rehearsal. u were singing with the back tracking like most cameos do,” she wrote. “People are bored. people don’t know how it feels to be under such scrutiny. the world was happy to have u on stage again.”

So, what’s the lesson from all this? Do not, under any circumstances, mess with Justin Bieber and Ariana Grande, because they have each other’s backs. And you know what? I really like that they do because Grande is right — no one really understands what it’s like to be on stage unless they’ve actually been there.